After I was kicked out of the Temple of Literature because it was almost lunch time, I decided to head towards the Old Citadel.  Near the flag tower you will find the Army Museum, and by the way most of ticket prices are super cheap to get into these places, around one or two dollars.

In the Army Museum you can see some of the artifacts left behind by the French and American during the wars.  Curious fact, in Vietnam the Vietnam War is called the American War. In this place you will see planes, tanks, bombs and other related items.  You can tell the Vietnamese are very proud of the fact they have kicked out a couple of foreign powers from their land. 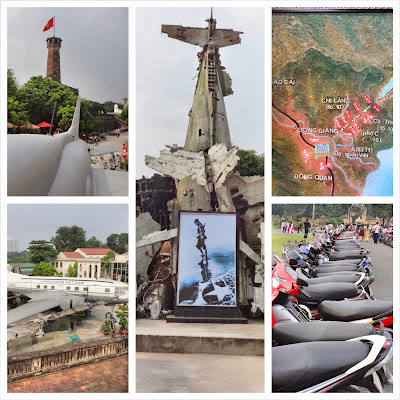 The flag tower and cool and you can access it from the museum, and I must admit I really like the Vietnamese flag, very simple and strong at the same time. I do not know the meaning behind the colours or the star, but I can assume it is related to the type of society they build after the wars, and the yellow star I imagine it means the different parts of the society representing one country. Then again you can always google and find out the actual story right? I just like to romanticize the idea behind this beautiful flag.  The Old Citadel is also another place you must visit, and give yourself some time because it is a big area.  Once again I found myself in the middle of tons of recent university graduates with their traditional colourful dresses.

Once I finished visiting those places I decided it was time to go back to the hotel, and on my way back I did walk by big boulevards near the government buildings, and please pay attention to the guards, because sometimes you are not allowed to take pictures of some buildings.  When you finally hit the small narrow streets of the old quarter this is where the city really comes alive.  It is just crazy and fascinating at the same time, you are not only avoiding been hit by a crazy vespa driver, but also you must quickly get used to the almost non existing personal space.  The market is full of colours,   flavours and people everywhere. I saw fruits I hadn't seen in years, and I had to stop many times at different corners just observing the non existing laws of driving in Hanoi. 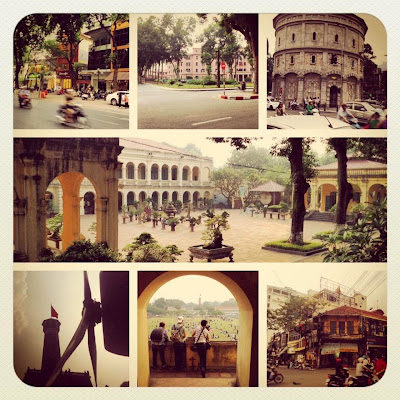 The following day, after having Pho for breakfast at the hotel, I decided to walk towards the Tran Quoc Pagoda located in the West Lake of the city. I must admit the pagoda looked bigger in the map than what it actually is, nevertheless it was a good way to start the day because I got to see other areas of the city I probably wouldn't haven seen if I had take a taxi or something.

Ladies and gentlemen, when visiting religious places make sure to dress accordingly, during my trip I saw people been turned away because they were showing too much cleavage or shoulders, more in Cambodia than in Vietnam.

Walking south I found what I assume is the the embassy area of Hanoi, tons of beautiful French style big houses and buildings around the Botanical Gardens, until you finally hit the Presidential Palace, oh my that building is just beautiful and very yellow.  You feel somehow gravitating towards this place until you look south and see the monstrosity of the Ho Chi Minh Mausoleum.  Alright maybe the Mausoleum is not that pretty, it is very square and imposing but not as beautiful as the Presidential Palace. 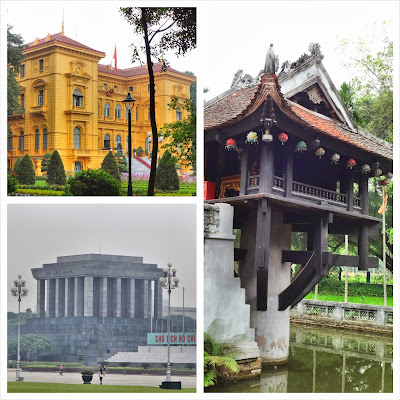 If you look to the left of the Presidential Palace you will find an entrance to the area, you might feel intimidated by the guards in the Palace, but do not worry and make sure to head toward this area, you will pay a fee and go thru security until you find yourself inside the Ho Chi Minh's vestige area.  Then you can walk towards the big square box in the middle of this huge park and take some pictures ... if you want of course.

Once you've done with this area you can go back towards the old quarters and stop by the Hanoi Hilton, the one where that famous American soldier (former presidential candidate) was held prisoner for a while.  My understanding is that the Hoa Lo Prison was a bigger place but most of the prison complex was demolished at the end of the century in order to build the Hanoi Central Tower. Personally this is one of the places you can leave out of your itinerary if you don't have too much time in your hands.

St. Joseph's Cathedral is another place to see, unfortunately this Neo-Gothic church, inspired in the original Notre Dame in Paris, is only open during mass. I did not want to go back so I had to satisfy my curiosity by checking the outside of the building.  Then I decided to walk all the way to the Opera House, another beautiful building modeled after Paris that is only accessible during showtime - I can tell you I tried to talk myself into the place but the girls did not fall for my charm, and instead I had to take my camera and visit the History Museum which is not far away from there.

Vietnam is still working on its Museum skills, there is a potential to eventually showcase their art, culture and everything else they want to show, slowly but surely they will get it right. 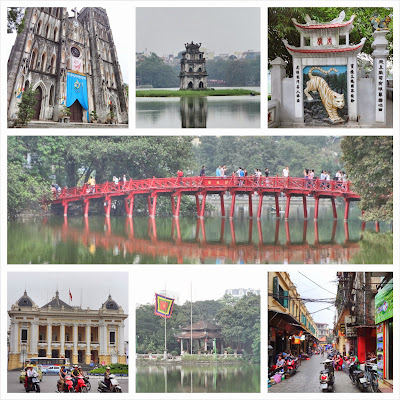 Around the Opera House area you will find more luxurious stores, and once I was done visiting this part of the city I decided to head to the famous Hoan Kiem Lake, where the Water Puppet Theater is located. Water puppetry is supposed to be one of the most Vietnamese cultural expression, and I was told it originated over a thousand of years ago. No, I did not see any of the puppet shows in Hanoi, the lake is beautiful and you cannot miss the Turtle Tower pagoda right in the middle of the lake. There is also another temple in the north part of the lake, where the puppet show occur, and around that area is also a very happening part of the city, then again anywhere near the old quarters can be considered busy.

If you are worried that you won't be connected while walking around, then you are going to be happy to hear wifi is pretty much available almost everywhere in Hanoi.  Just sit down on a bar/caffe/restaurant and the wifi password will be printed in their menus, or just ask them if you can have access to the wifi.

Another thing Vietnam can teach most of the countries in the world is about the universality of their electrical outlets.  I know you are already thinking you need to buy the adapter to plug your camera, telephone, iPod or what ever you need, and most of the outlets are ready to receive either your North American, European, South American type of plug.  Why can't all the electrical outlets of the world be like in Vietnam boys and girls?