Three nights in Hanoi already, in reality I had 3 nights and 2 full days in the city, and I was ready for my next planned destination, the famous Ha Long Bay area.

I did a lot of research regarding the tour operator for my Ha Long Bay trip, and on top of that my best friend had suggested a day trip instead.  3.5 hours driving down to Ha Long Bay, and the multiple beautiful pictures I had seen so far about this place convinced me I had to stay overnight. 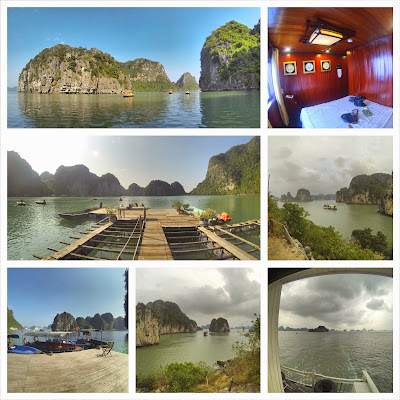 Indochina Junk was the winner in my case, more in the luxury category but not that more expensive compared to other companies, and it was worth it.  I actually wished I had done the 2 night tour instead, because this place is just incredibly beautiful, and the tour operator did a fantastic job in everything, from the organization, the food quality, cabins, I even had 2 silk robes in my cabin closet, and yes I did try those robes and they felt so good.

It doesn't matter whom you book your trip with, the weather is the wild card. I was there at the end of October and when I arrived it was gray and misty.  2 hours later it was sunny and beautiful, then a bit gray again, and the next day was sunny as what I had ordered in the catalog.

Nothing prepared to the fact this place was so massive and impressive. Yes, I had seen pictures before and read so many people talk about this place, and one thing is to hear about it and another is to be there and see it yourself.  I stopped counting how many times I said Wow and wow and more wow.  Yes, Ha Long Bay is that impressive. 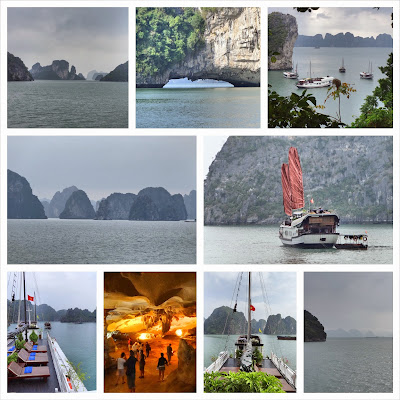 The place is popular and there are several different companies operating in the area, and pretty much all of them take you thru a similar itinerary, where you sail around those incredible limestone karsts and island of different sizes. I believe they told us only 700 out of the almost 3000 (?) island have been named so far.  Some native population used to live in the caves found in island, and one day the government decided to move them to floating villages - according to the government they are happy now, I do not have confirmation from the locals, but it is interesting to see those fishing floating villages. More impressive is to see dozens of tourists walking around and taking pictures, including me, while the kids are at school and not once they turn to see you.

The location of the those floating villages protect them from the dangerous typhoons that hit sometimes the area. Some of those villages have population over 1000 people.


Very romantic place, and I met up interesting people in my junk, I spent good time with 2 Australians and a Brit.  After returning to mainland I had to head back to Hanoi to catch my train to my next destination.  Out of all the experience, the only thing I could had done without was the stop over to see the water poppets on our way back to Hanoi - I'm sure the tour operator means well by letting the travelers stretch their legs while watching something very Vietnamese, and the guys did a good job with what they had available to them, but I this point I just wanted to return to Hanoi. 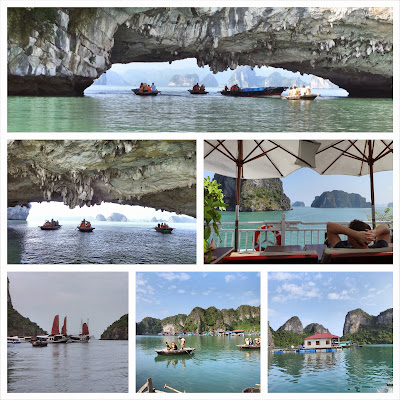 Returned to the hotel, which had offered a room for a quick shower before leaving to the train station, went for a quick dinner down the street, then picked up my backpack and left to the train station to get on my 7:30pm overnight train to Dong Hoi, the famous Reunification Express than runs from Hanoi all the way down to Saigon.

You can ask your hotel to book your train, and they will give you the schedule and prices. If you want to check the schedules visit Seat 61.  Another way to travel around Vietnam is by flying, and it is not expensive.  It only costed me around USD 70.00 to fly from Saigon to Hanoi via Vietnam Airlines, I could have done it cheaper with the low cost airline but I did not want to risk the usual cancellations or delays that I heard happens very often.  Actually my fights with Vietnam Airlines were changed twice, and cancelled once, but nothing that affected negatively my travels.

Happy Halloween people, after 12 hours of traveling by train I arrived in Dong Hoi.  The train was alright the only problem was I didn't sleep that much because I was worried I was going to miss my stop, all messages were in Vietnamese, but I shouldn't have worried, what you should do is put your alarm for 30 minutes before your schedule arrival and then wait for another extra hour because your train will most likely be late. Twice I took the Reunification Express train in Vietnam and twice the train was late for more or less one hour. 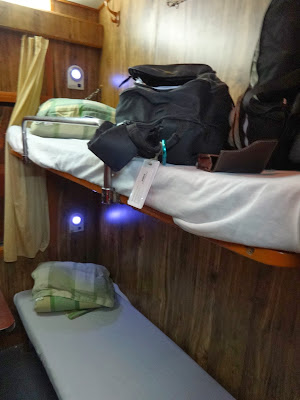 Why Dong Hoi? It is very simple guys, while researching for my trip I came across some postings about this Paradise cave (Thien Duong Cave) and without been there I knew I had to go.  I checked the train schedule and there were 3 trains that would get me there at early morning hours (SE1, SE19 and SE3).  I wanted to arrive super early because I had read the Phong Nha Farmstay offer the 7km long trek inside the cave, which must be with a guided tour otherwise because you are only allowed up to a 1km inside this huge place.

I exchange some emails with the Farmstay people, and they were very helpful unfortunately there was a 2 days minimum stay requirement, and I only wanted to stay one day. To go in the 7km long trek there must be at least 2 people and because we couldn't confirm one more person I decided for alternative arrangements to visit this place.

Dong Hoi was bigger than what I thought, the books gives you the idea this city is in the middle of nowhere, and in reality is busy town with a striving business community. Is there something else to see? I have no clue and I believe the majority of visitors use the city as the base to visit the caves. Actually I did talk to several fellow travelers and I would say 50% of them didn't know anything about this city or why I was coming here. Nevertheless I expect this to change as more people learn about the existence of the caves, and more even with the opening of the newest and gigantic Son Doong Cave (Mountain River Cave).

I booked a room at the Nam Long Hotel via Agoda (USD 18.00 - would had been USD 12.00 if just show up at the door), and the place was good enough for me, I do have to say I ate the saddest looking omelet of my life in this place, but I didn't go there for the food right? 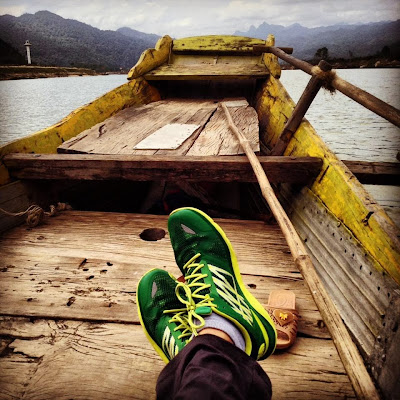 Arrived at around 7:30am to the hotel and by 8:00am I had already checked in (lots of travelers leave early to catch the train), and by 8:30am I was already in the mini-van on my way to the caves with another 4 souls. It costed me around 800,000 dongs, and the visit included a morning visit to the Phong Nha Cave (you enter the cave by boat and was a storage and hospital during the American War),  lunch and the visit to the Paradise cave in the afternoon.

It is a good thing you visit the Phong Nha cave first, and it is a nice boat ride to the location, sometimes I just felt like screaming "good morning Vietnam" but I didn't. The scenery is special and when you see the opening of the cave from the boat you realize this is a special place.  If you have never seen one of those caves you will find wowed from the beginning to the end of the trip. You do get out of the boat and walk into the cave, which is lighted up everywhere, and sometimes you wonder how much damage is happening because people like me want to see this place. 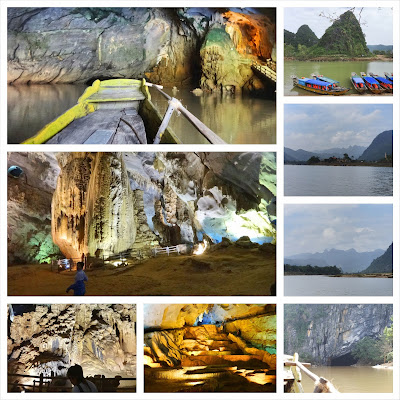 Then after a good lunch you are on your way to see the cave everyone is talking about, and get physically read to get to the top, and take the stairs otherwise you are not allowed to brag you made it to the top.


Guys, there is no way to describe how big and beautiful this cave is - seriously I understand now why they call it the Paradise Cave.  Mother Nature has really done an incredible creation in this place.  You can fit a small city inside this cave, and even though I did not do the 7km long trek I'm telling I have never seen something like this in my life.  I don't care how long you are going to be in Vietnam, but if you are going to visit make sure to add this place to your itinerary. 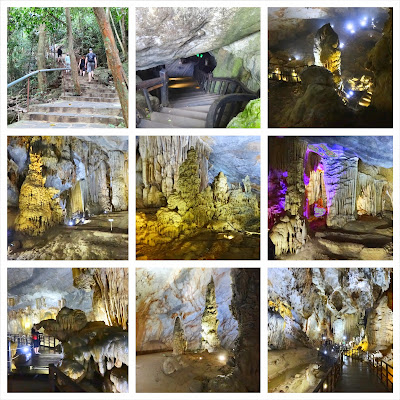