June 18, 2014: “What is expensive?” This was the main question asked after I returned to Montreal. I also got the “how cold is it?”  Expensive is definitely relative to where you are from and how big is your budget right?

Gas costs around CDN 2.50/liter compared Montreal's CDN 1.50/liter is a bit on the expensive side, but then some Europeans will claim to be “normal” pricing.  If I wanted to have a regular meal (fish/steak/lamb) with no drinks included the price was between CDN 25.00 to CDN 30.00. Burger, fries and soft drink was around CDN 20.00, finally if you wanted to pick up a sandwich from a super market that would probably cost you around CDN 10.00 - beer was around CDN 10.00 - that give you an idea of what I call expensive.  This was my vacation dammit and I was there to enjoy it so after day 2 I did not care anymore about prices, alright just a little bit. 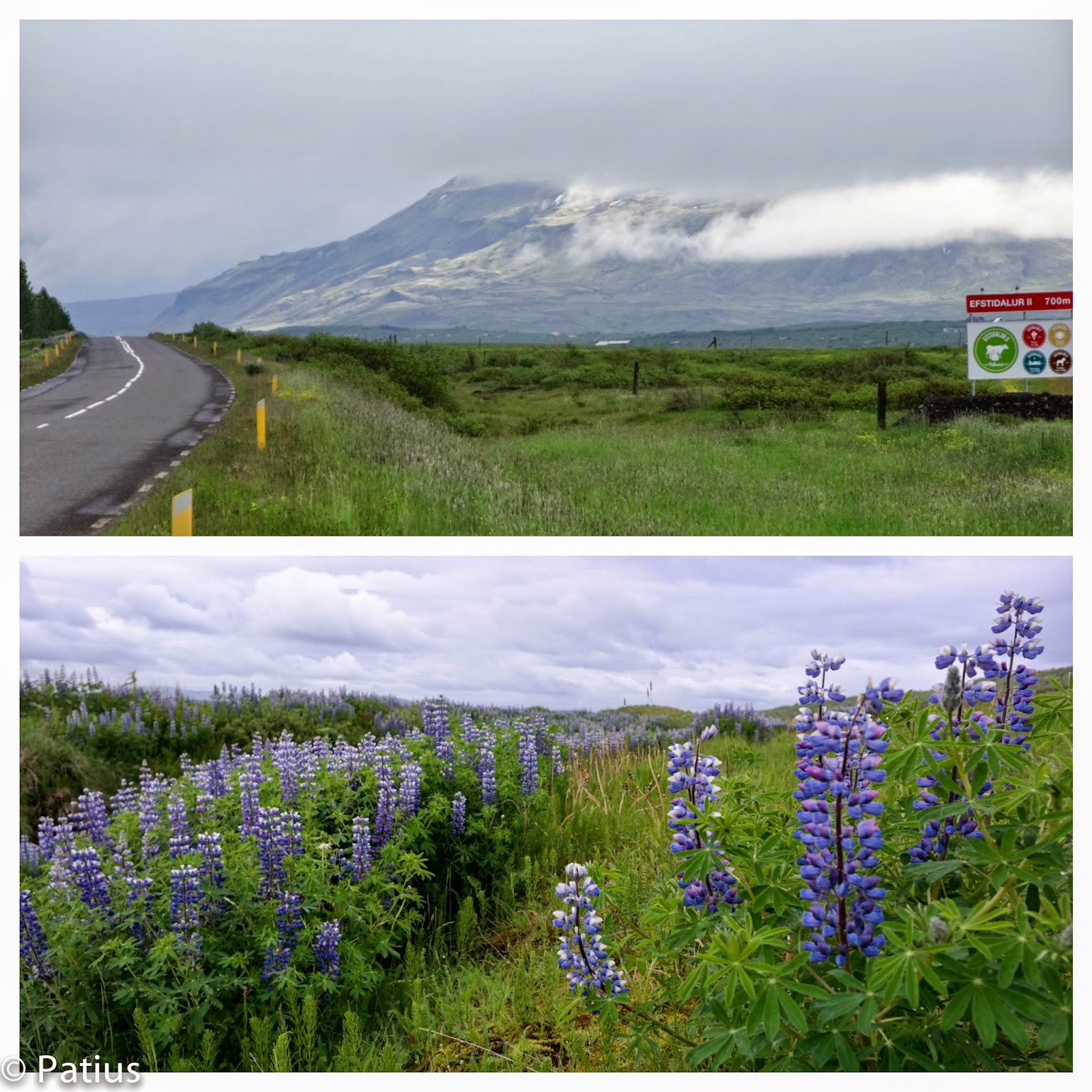 You will hear a lot about the Golden Circle Tour in Iceland, pretty much is a “circle” that includes the attractions of Reykjavik plus Geysir, Gullfoss and Þingvellir National Park. This meant I had already started my visit to the circle the day before, and I was staying not far away from the Geysir area.  When I arrived at my hotel it was raining like there is no tomorrow, but in the morning everything was much better, I could actually see what was around me.

Today my final destination was going to be a bed near Vík, the southernmost village in Iceland. Road 365 lead me to the road 37 where my first stop of the day was waiting for me. Geysir is the father of the geysers, unfortunately it decided to become dormant many years ago. Strokkur is the performer of the family, and the smell of sulfur (rotten eggs) is eminent as soon as you step into the area.  While driving to Geysir some kamikaze lambs decided to through themselves in front of my Yaris but I was able to avoid the carnage of the lambs.  Then I looked to the left and I saw Lassie (a herding dog) running in front of at least 30 Icelandic horses, really? Lassie was working them man, the horses were following the dog like they knew honey was waiting for them at the end of the road.

Confession of the day, I was happy I stop to see this natural wonder, but in reality I was not wowed by the experience.  It was cute and it was nice to see where all the geysers got their name from but I did not spend too much time in this area. 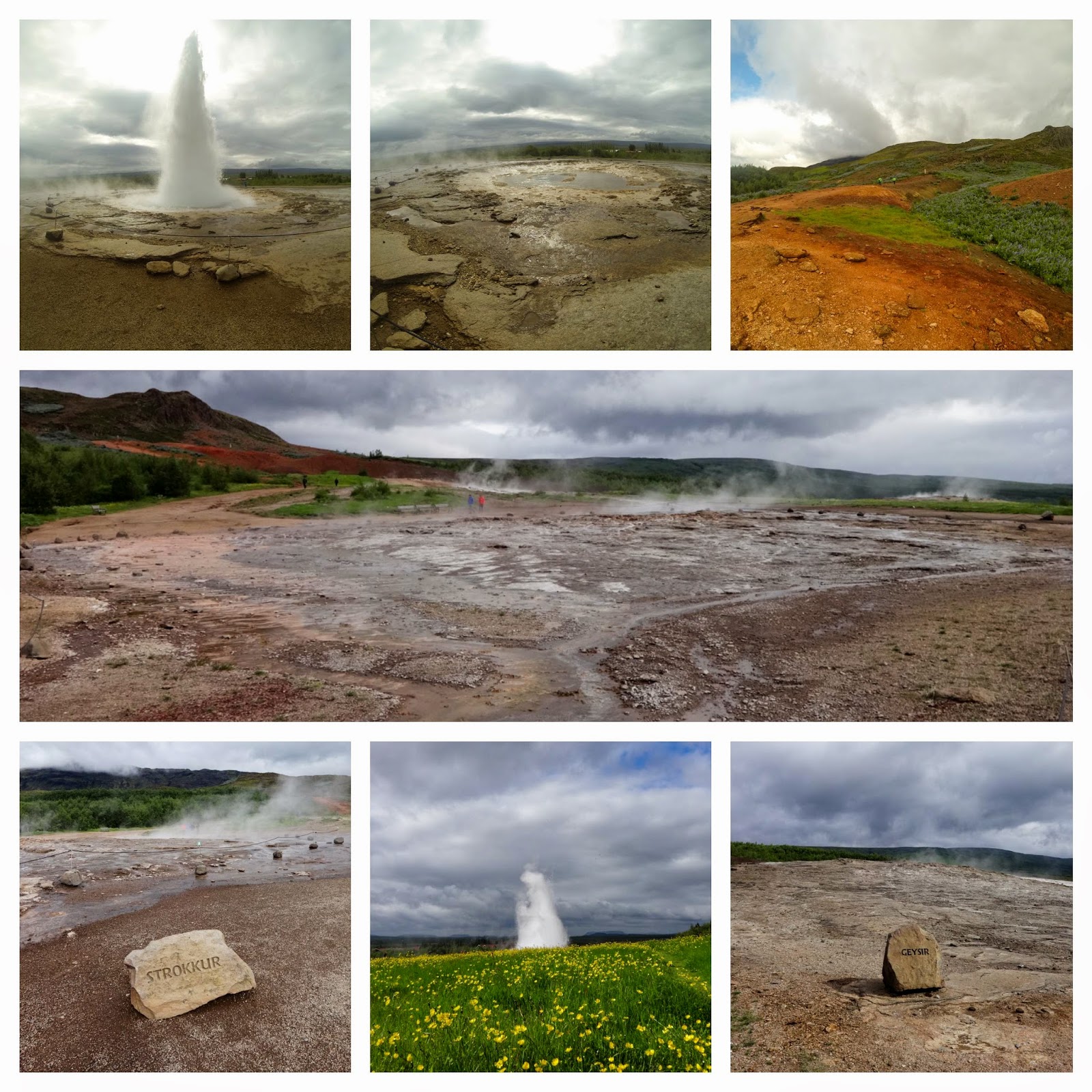 10 km further the golden waterfall was waiting for me, the famous Gullfoss.  I had seen pictures of this triangle of water love before, but there is nothing like seen it in person. There are 2 levels to visit this place, the wet one and the safe dry upper level.  You must walk in both because it is fascinating, specially when you see mothers pushing their new borns carriage to the wet level. 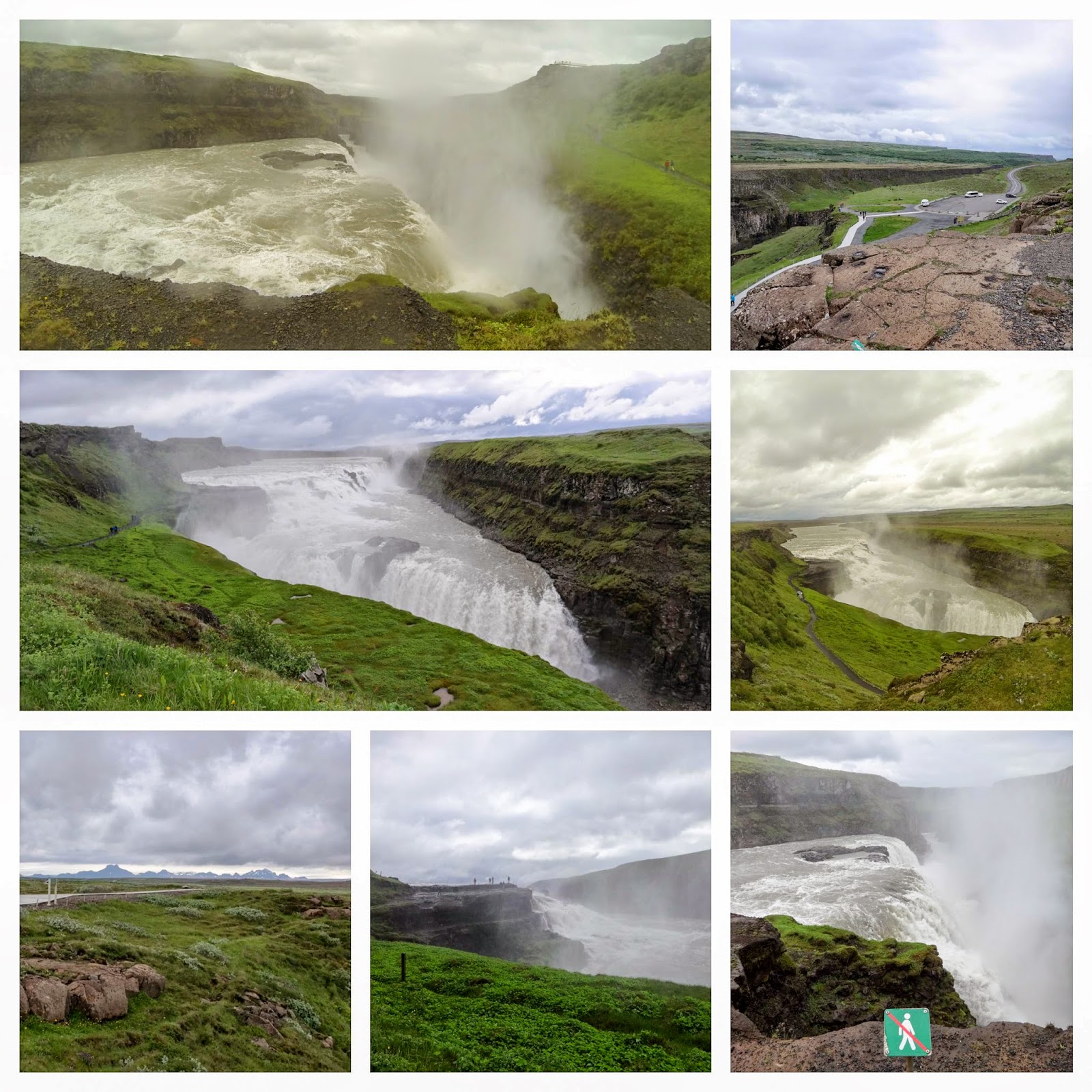 Gullfoss almost disappeared once upon the time, similar to what you see when the river vanishes into the earth.  What almost became a hydropower plant today is one of the most famous and visited waterfall in Iceland.  There are so many angles to photograph this natural beauty, I’m just glad I got to experience this place.

Drove south on road 30 until getting to the precious road 1, at this point I was looking for Urriðafoss, a waterfall located in the river Þjórsá in southwest Iceland. This waterfall will eventually disappear when the planned powerhouse is built. Not very impressive but good place to stretch my legs again.  Along the way I picked up this German kindergarden teacher, she was going to this earthy festival somewhere along my route, I was happy to help a fellow tourist. 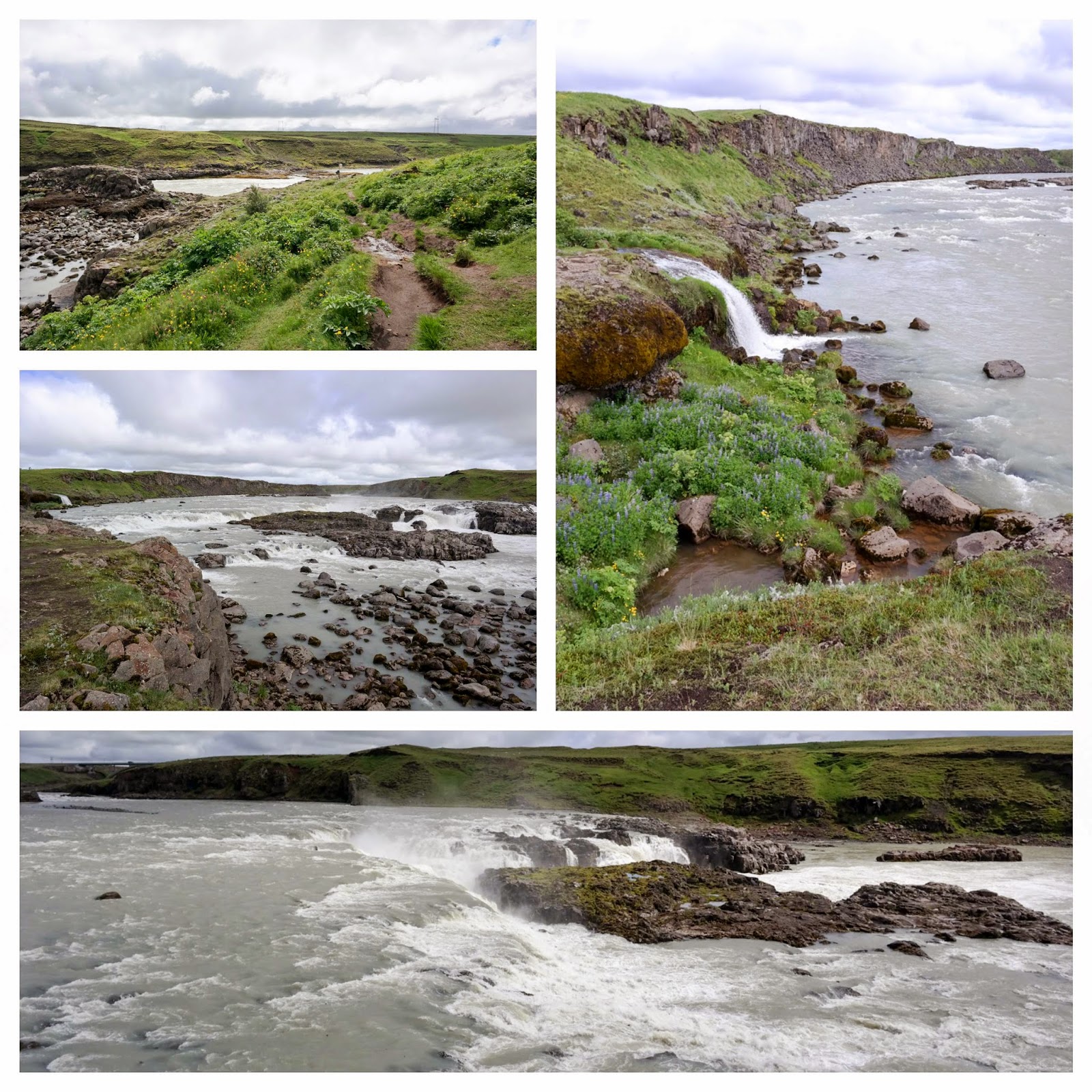 Seljalandsfoss was my next destination along road 1, and what an incredible waterfall this is, there are other waterfalls in the same area, but this is the one you want to see. Get ready to get wet, and when I got there a photo shoot was under way, there were several cute models getting wet and all. Some Russian teenager tourists were also trying to prove their toughness I guess, because they decided to climb to the top of the waterfall.  I just loved this place, I got wet, I smiled, I screamed while getting wet, it was a dream come true guys, what else can I say eh? 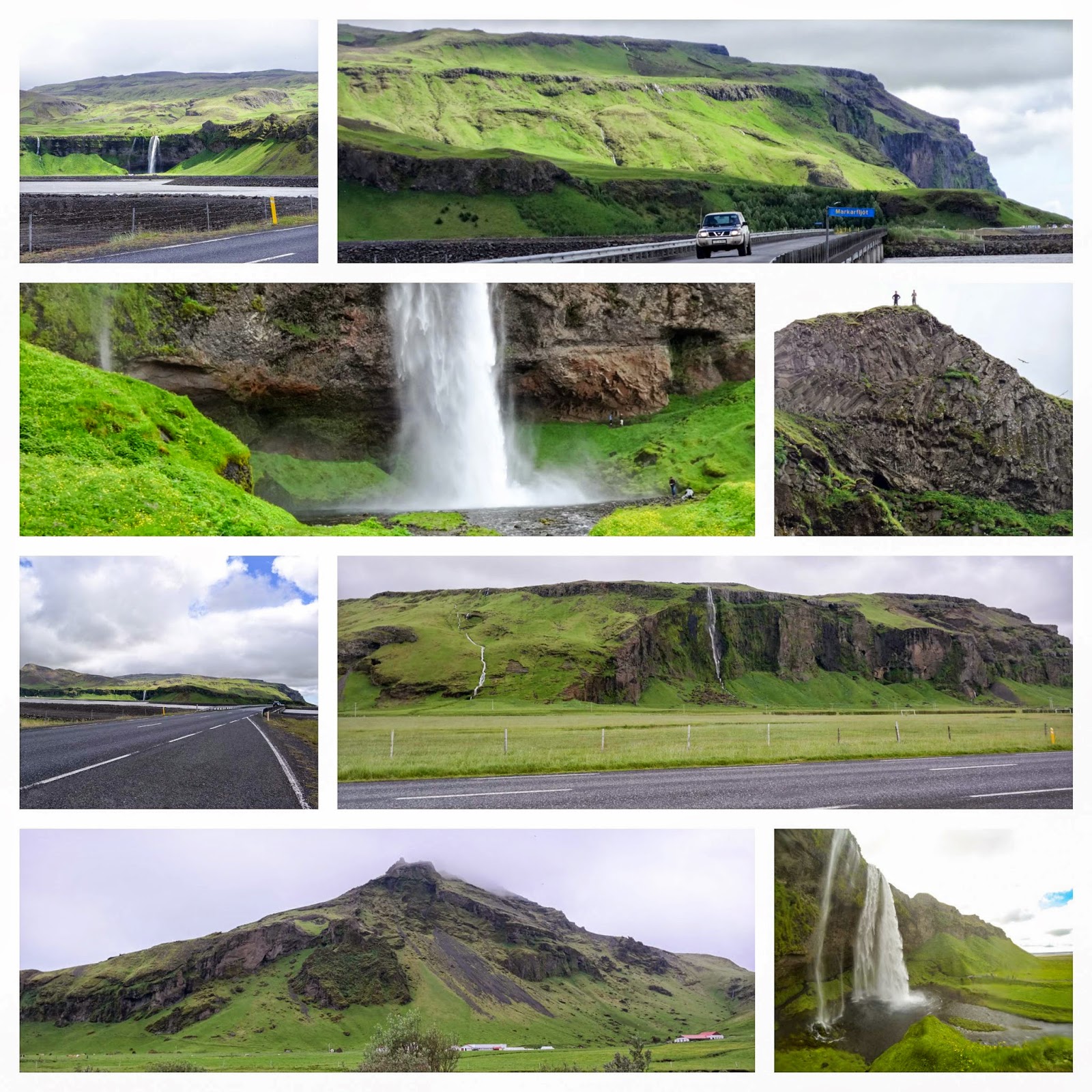 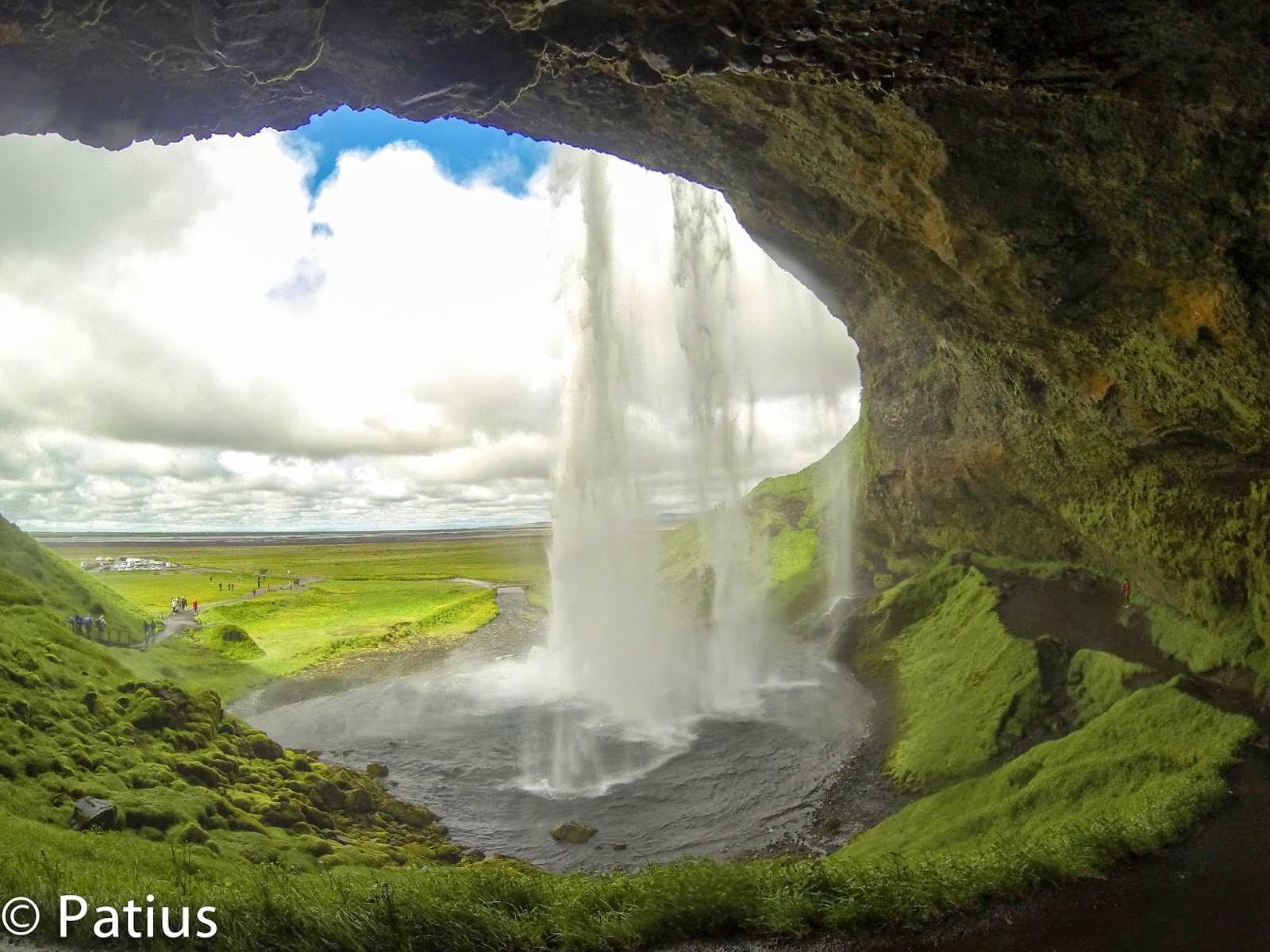 Around 30 minutes drive from this location you will find the ferry that takes you to the Westman (Vestmannaeyjar) Islands, but I will talk about this place later on.  Back on road 1 towards east I went, until I saw one of the highest waterfalls in Iceland, Skógafoss.  By now you probably figured out “foss” means waterfall right? 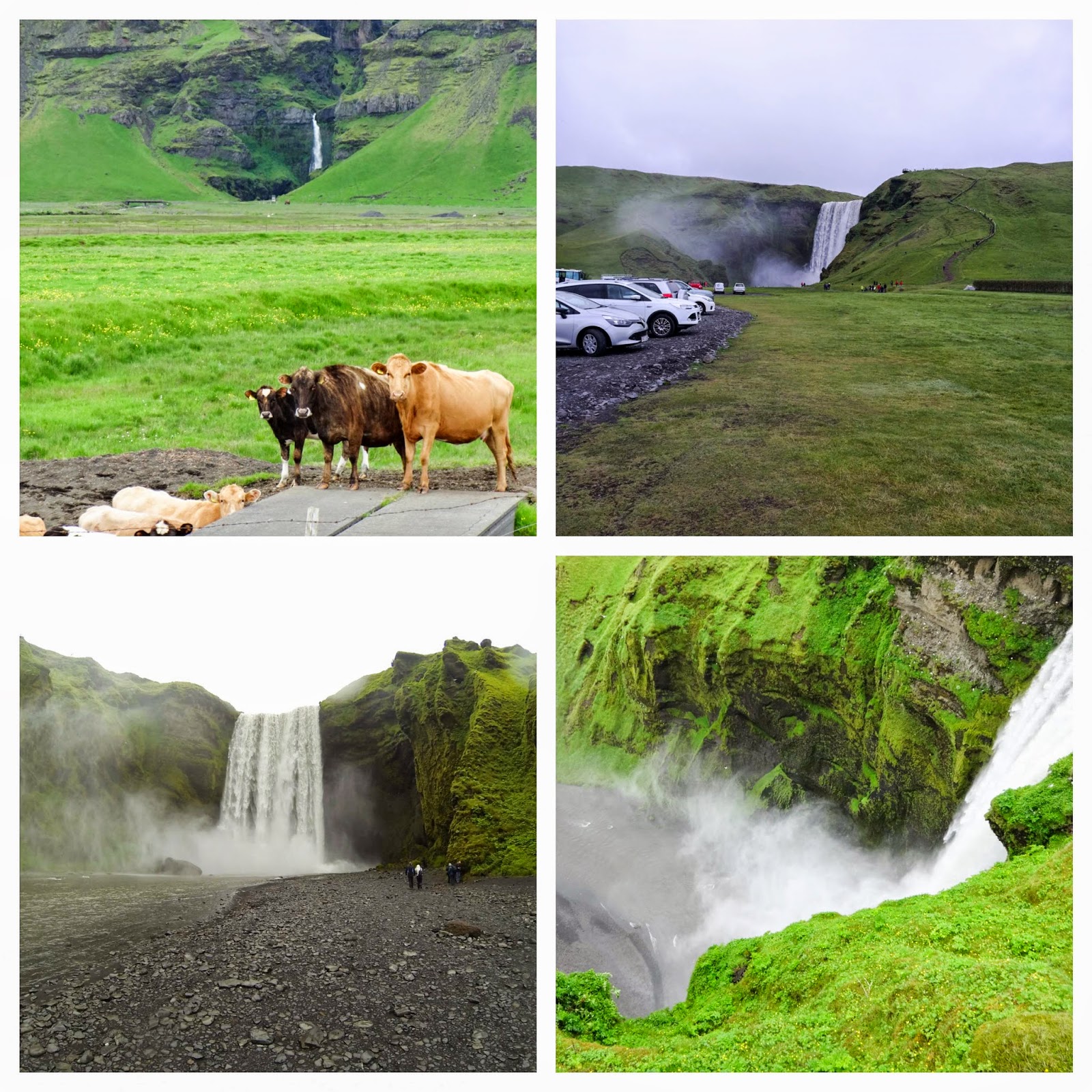 Lot of people camping in this area, and according to the legend some Viking buried a treasure in a cave behind the waterfall, I decided not to pursue the legend and climbed the steps that lead you to the top of the mountain instead.  There are around 25 different waterfalls if you decide to hike the area, and I think the most difficult part is getting to the top.  Just breathtaking view of the valley from the cliffs, which used to be the coastline many many moons ago.  Do not forget to bring your jacket because it could get windy at the top, and you don’t want to get windburned right? 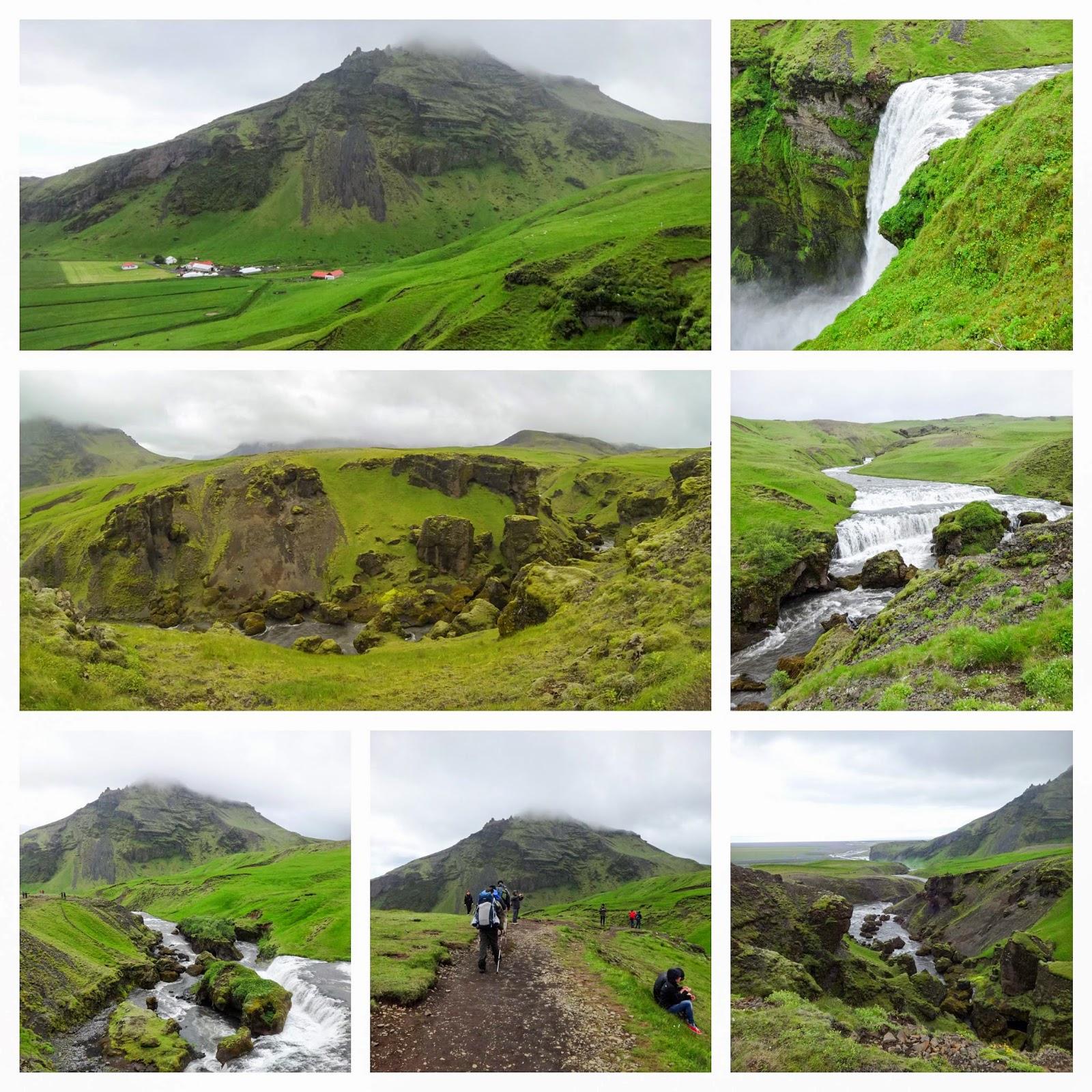 After satisfying myself with this magnificence hike I was ready to keep going.  I had already decided my next stop was going to be the Cape Dyrhólaey and then the city of Vík. Driving I was again on road 1 when I saw it, I know we have them in Canada but I have never actually seen one. No too long after leaving Skógafoss you will see from the road the glacier called Sholheimajökull. I felt like mermaids were singing and calling me to drive there.  I had read it was a gravel road and rough, my original plan was to bypass this attraction but the first thing I did when I saw the entrance to road 221 was to turn and drive to the glacier.  There were some other cars driving the opposite direction, and you have to pay attention to the big 4x4 because some of them don’t slow down and there is always the dangerous your car will get hit by little stones. 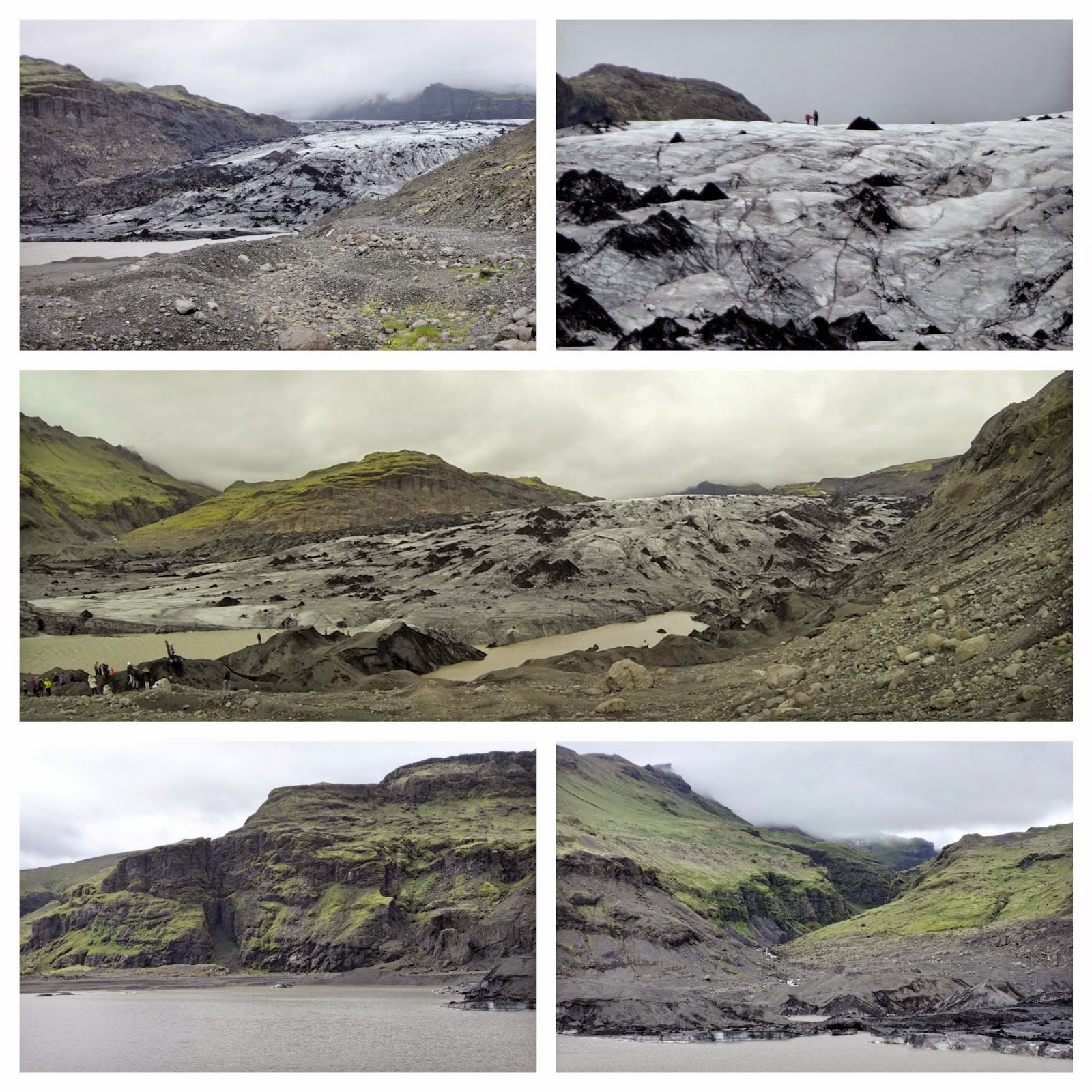 My first glacier and I was not disappointed, I just sat there and looked at that enormous amount of ice that has been moving for thousand of years.  I overheard the instructors of a hiking group that they shouldn’t walk in some areas because it was summer already and they could plunge to their deaths in hidden holes.  Glaciers in Iceland have some dark layers and this is due to the volcanic ashes that follow each eruption. 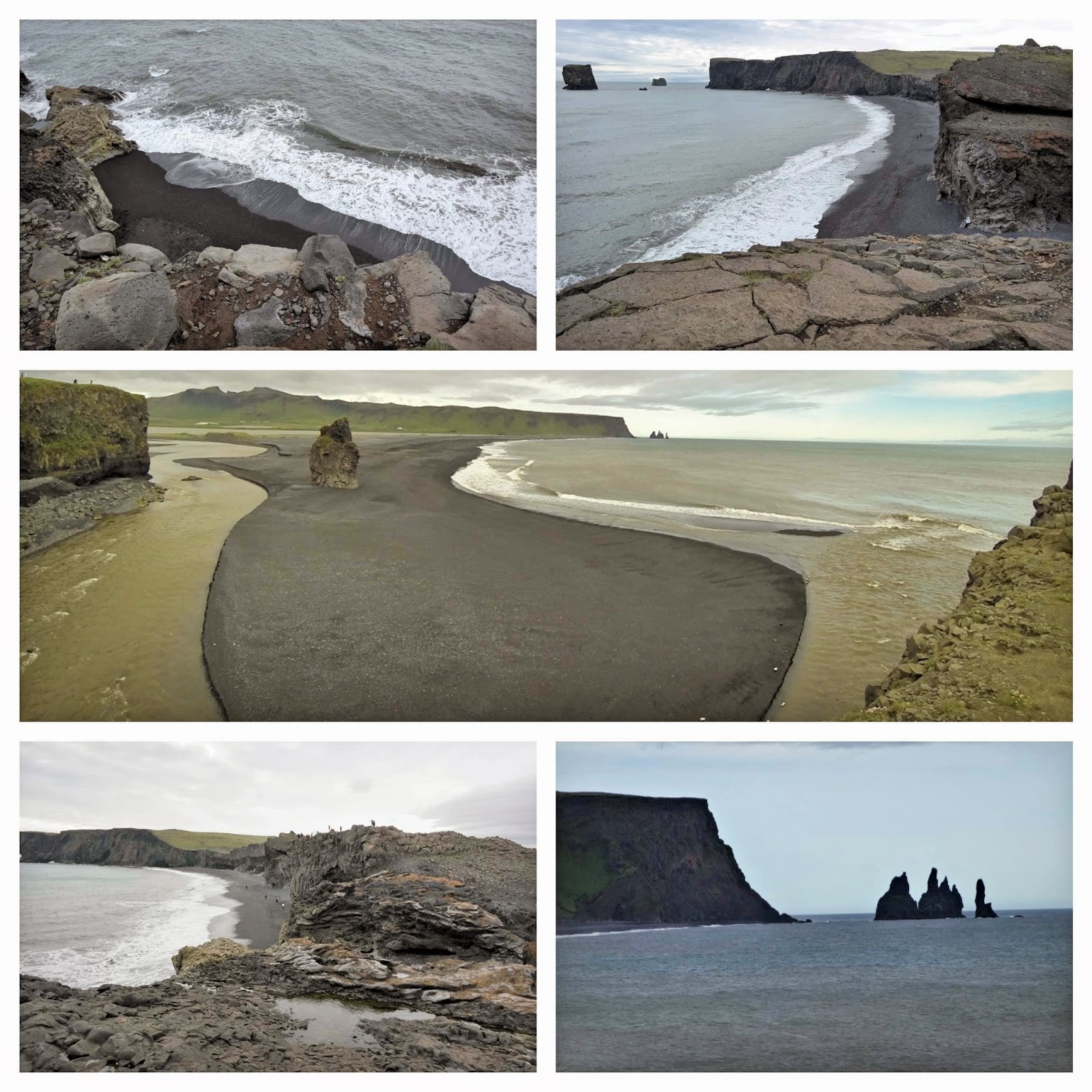 Back to the main road I went until I existed on road 218 towards Dyrhólaey peninsula.  Depending when you visit puffins might meet you there because the cliffs are one of their nesting areas.  Fascinating place, they call it the door hole and you want to see it in different angles because you have the cliffs, then the black lava columns of the Reynisdrangar come out of the sea, the black sand beaches and towards inland you get to the see another glacier.  It is an overload of natural beauty.  I must admit, this was a long day and I was getting tired, so drove back to the main road and exited on road 215 to get my other angle of the area.  Walked on the black sand beach mixed with some type of pebbles and actually stayed there for a while.  Finally drove to the guesthouse I was staying that night, Eystri Sólheimar, cute place where I actually spent 2 nights. 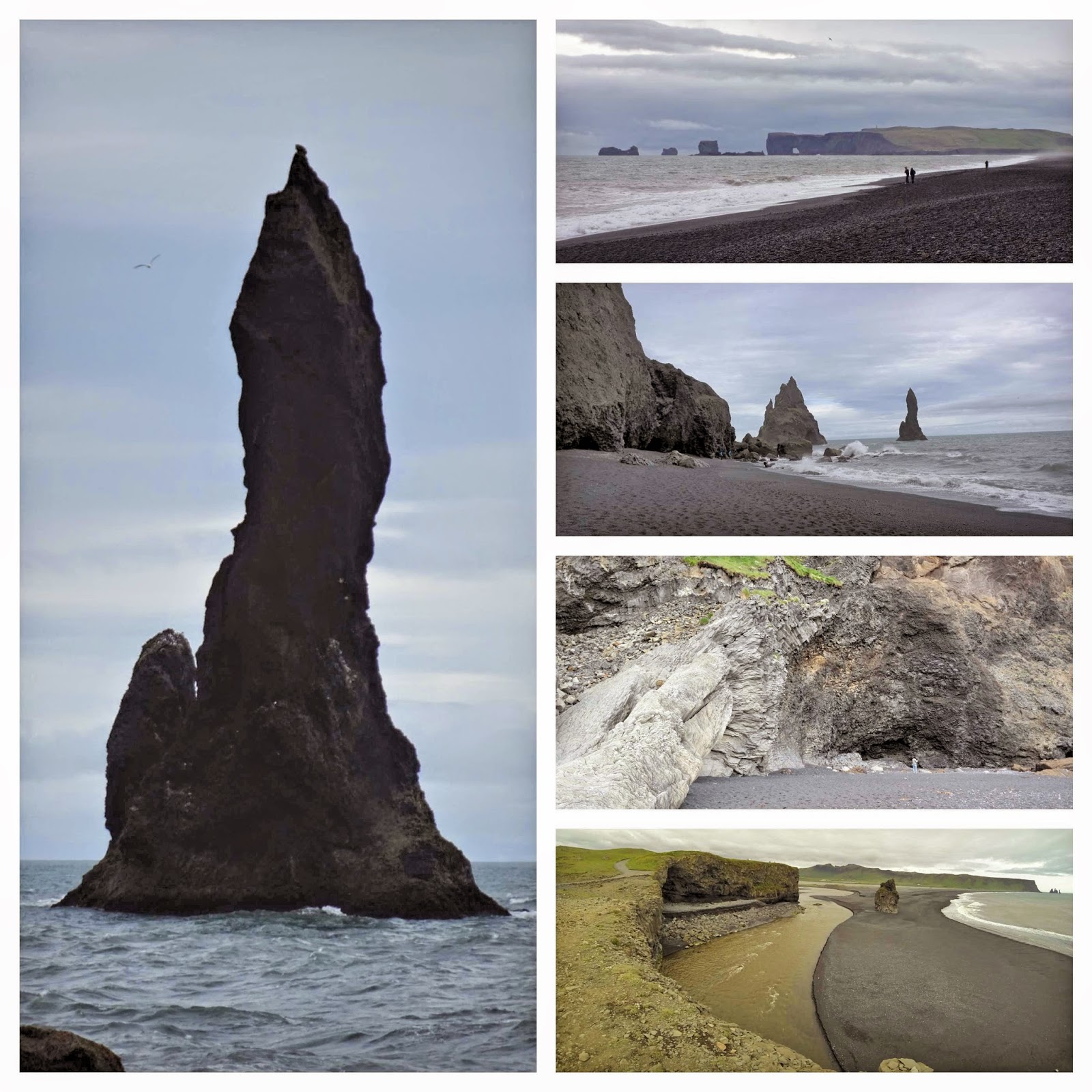 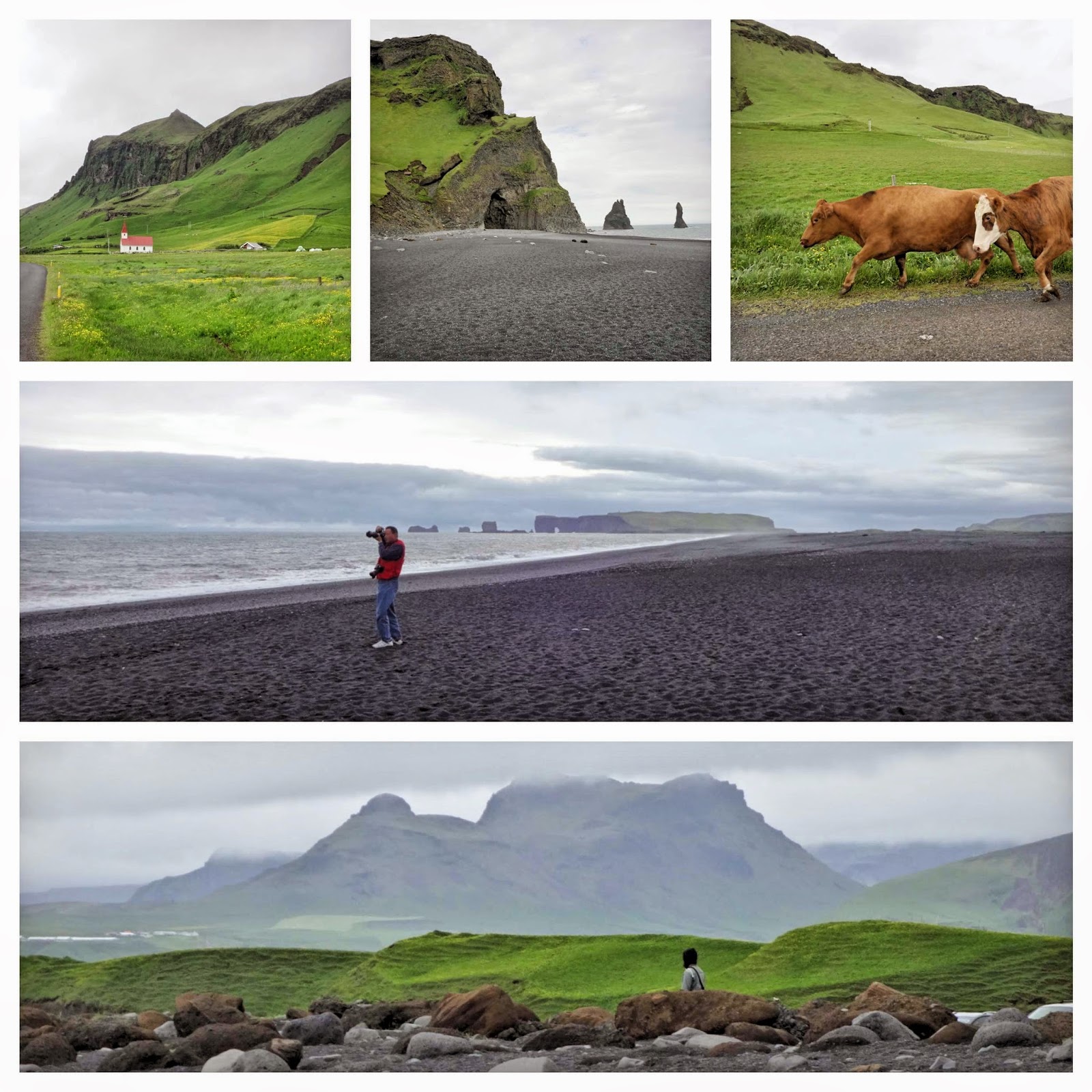