Barghain & Panorama Bar had been described by many as the place to be in Berlin, if you like Techno - and although some purists claims this place is now considered a tourist trap in their city, I can confirm both claims and more, and regardless of what you heard, a visit to the temple of techno is well deserved and worth it.
Some people told me to get there early, and I thought early was midnight, never thinking they were referring to 11:00pm or so - by 12:30am I arrived and couldn’t believe what I saw, the line up was more or less 1.0km long, if not more. It took me 1h30 to get in, and not because I waited in line, I did for a while, but when in Rome do like the Romans do, and I saw many people just walking up to the front, so did I, and what a mess that is .. Until you get closer to the entrance, when a metal fence (now I know how the cows feel) forces you into the main door in an organized fashion.

Then you have to confront the bouncers, which with a gesture can let you in, or just move you to the side and tell you to wait, or just to go away. Don’t even try to talk back because then you are more likely to be banned for the night. Didn’t have any trouble in getting in, and once I paid the cover (€ 14.00) walked into what looks like an abandoned industrial building, full of lights and amazing music playing upstairs. The place is gigantic, and concrete is the main décor - big blocks of concrete have been split in two, added some cushions and voila, you have a nice sofa to rest your body. There is a large bar in the ground floor, and behind it there is dark room (most of the bars I visited in Berlin had a dark room), and if you are not into what happens inside, don’t even go there.

Walk yourself thru the big metal staircase that takes you to Berghain and this is when the craziness starts. Don’t even ask me how many people were there, and the human heat just hit you on the face. You look at your left and there is one room, you look to the right and there are more rooms, you look everywhere and always it seems there is a hidden corner. If you see a staircase just take it because you want to know what is going on up there.

There was this big room beside the main dance floor, with a blueish ceiling (simulating as if it had a skylight), and once I got in, I noticed 2 big swing sets, one of them the normal bench style swing, and the second one a big square that could hold 8 people or more. People were just there, swinging back and forth, either resting or having a nice conversation. I couldn’t help and had to join the fun - it was really kind of cool and funky at the same time. The main floor dance floor (Berghain) is the gay one, but I would say 40% was gay and 60% straight. There are 2 main decks, one embedded in a room, and the second one I think is built as needed. Anyway, both were being used the night I was there, one DJ would finish his/her set and the other would began right away in the second deck. The light man is placed strategically in another platform at the end of the staircases that leads you to the Panorama Bar (the straight one). Didn’t spend too much time at Panorama, but basically is the same concept, and this one also has some hidden rooms attached to it.

What about the music? Divine, it was techno in all its incarnations, and the beats would go for the hard industrial techno to the soft minimal tech that I love so much, and everything in between. It was hard to keep still either because the music, or because you wanted to check out what was going on in the other areas.

DJ schedule for Berghain: Paul Kalkbrenner, AGF + Delay, Thomas Muller, Ellen Allien, Feadz 2000 and One + Shinedoe. Unfortunately I’m unable to tell you who was who, but what I can tell you is that I liked the music - I was ready for some techno and that is what I got.

It was probably around 6:00am, I was downstairs talking to this girl from Berlin about the Stereo club in Montreal (both clubs have in common that no cameras are allowed in), when I heard a melody that I recognized from Brazil, I excused myself and told her I had to go upstairs, and as soon as I got up, the voice of Simone singing came out rocking from those giants speakers: If you listen to this song in a non club environment, it might not do too much to you, but when you are in a party, at 6:00am and vibe is just getting out of control, there is no way you can not feel this song.

Really cool crowd, a mix of everything and anything, lots of locals and lots of tourists, but everyone conforming to the vibe of the place, which basically was you do whatever you want to do, and that was to dance. Did not notice too many f*cked up people, mostly were drinking beer (no last call).

Got the chance to meet some locals, friendly bunch, at least at this place, and I really enjoyed my evening. Stayed until 9:30am and left because my legs were just killing me. Even when I was leaving the place, there were still people coming in (no more line up), and I really thought about returning in the afternoon, but decided to go to a museum instead. 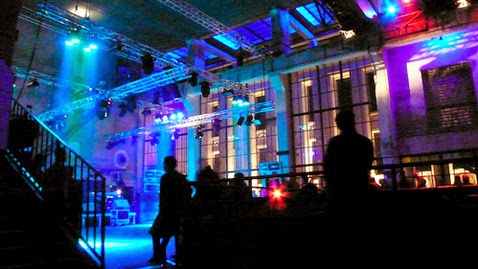 If you go to Berlin, and you like Techno, do yourself a favour and get your ass to Berghain & Panorama bar, get there early in order to avoid the huge line up, but even if you have to wait, it will be worth it - conveniently located close to the train station. Montreal might have the Temple of House music, but Berlin has the Techno one. Turn your dreams into reality in one night of good dancing, and don't forget to go home.


and here are some pics from my trip to Berlin