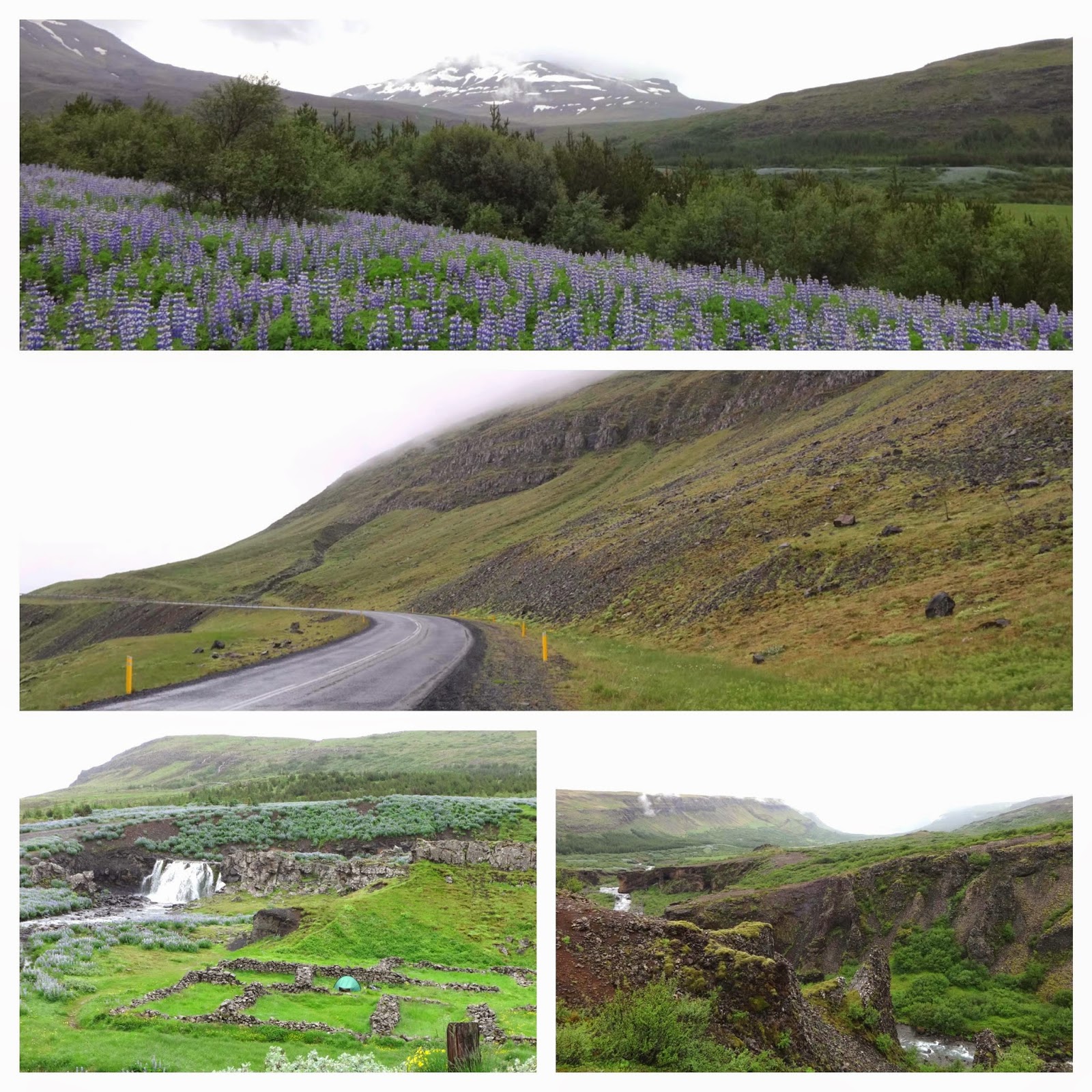 There are basically 3 types of roads in Iceland, the main road or Route no 1, also known as the Ring Road because goes around the whole island (1,332 km), secondary roads using 2 or 3 digits in their names (some of them are gravel), and the famous mountain roads, also known as Highland Roads and they are marked as F-roads (F35 / F338).  Why is this important? Because if you want to drive on the F-roads you will need a 4wd vehicle, otherwise you might be subject to serious fines by the police, and who knows what your insurance will do if you damage your rental in non authorized zone.

July 16, 2014: My final destination was going to be my hotel in Stykkishólmur, in the north part of the Snæfellsnes peninsula. Left my hotel at around 8:30am and drove north on Route 1 towards Hvalfjörður.

As soon as you leave Reykjavik your mouth starts dropping by the scenery in front of you, sometimes I must admit is difficult to pay attention to your driving because you can’t stop looking at those giant mountains with those green/yellow colours. My solution was to actually safely stop whenever I could in order to fully admire the view. 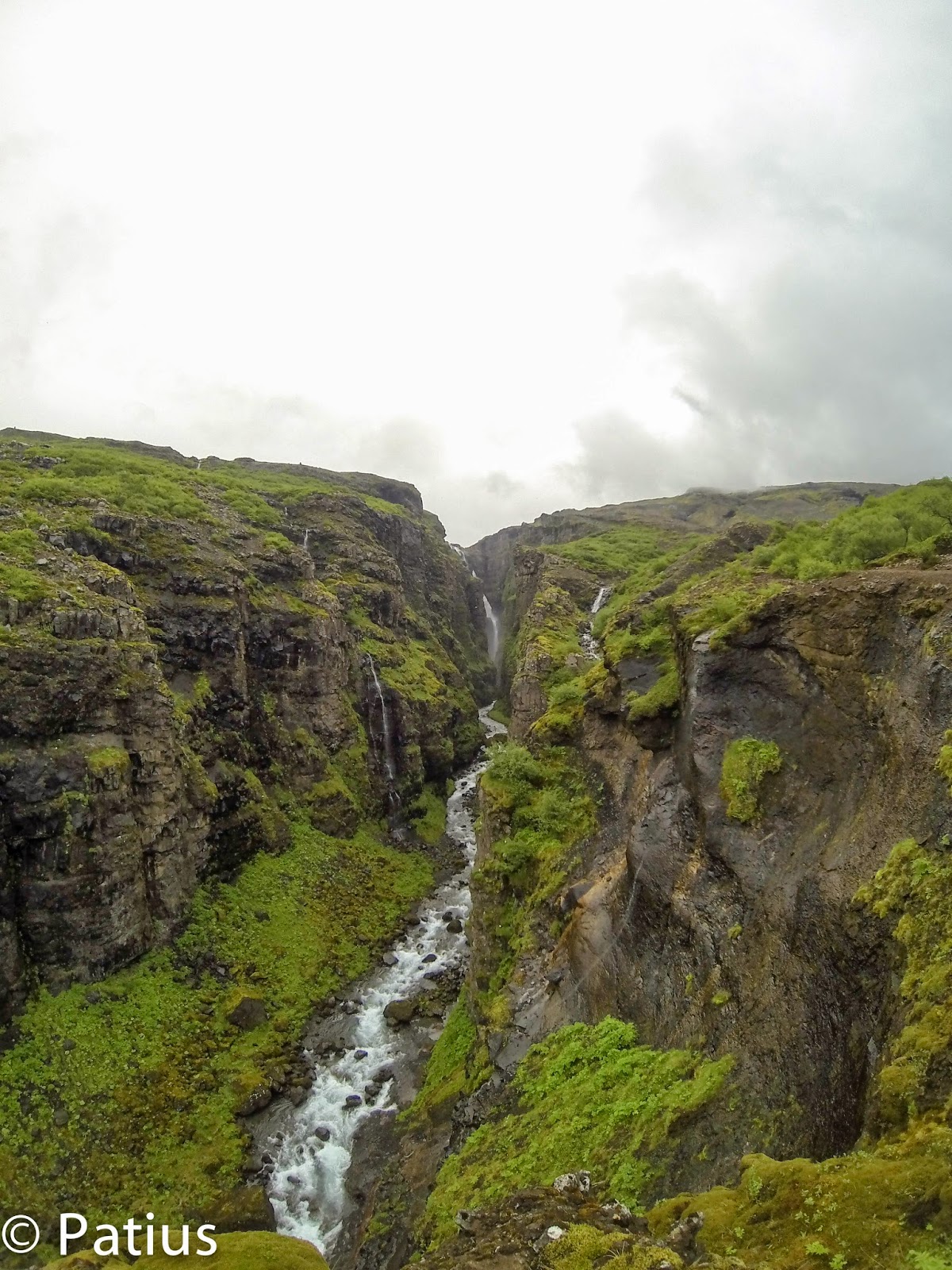 Once in Hvalfjörður, I knew I was going to drive around the fjord because I wanted to visit the famous Glymur waterfall.  Many people choose to bypass this natural wonder by taking the submarine tunnel, please don’t do it because first of all the fjord is beautiful, and second the waterfall is a natural monument, the second highest in Iceland.

Small drive in a gravel road until reach the parking lot to start the hike to Gylmur. Before leaving Montreal I had thought about not bringing my Camelbak water backpack, glad I brought it because I used everywhere in my hikes.

Not a difficult hike, probably took me 45 minutes to get there, and along the way you are exposed to an unforgettable landscape.  When you reach the water stream you have to literally pass thru a small cave to get down to the river bank, then walk across a log to reach the other side and then start climbing to the top of the waterfall.

You can keep walking because there are other place to visit if you want to, and along the way I met two Belgian guys I wished I had exchange emails with, because returning to the car I was when I turned around and saw them standing in one of the edges of the waterfall. I know they would like to have a copy of this phenomenal moment, because I’m sure they felt as if they were at the top of the world. 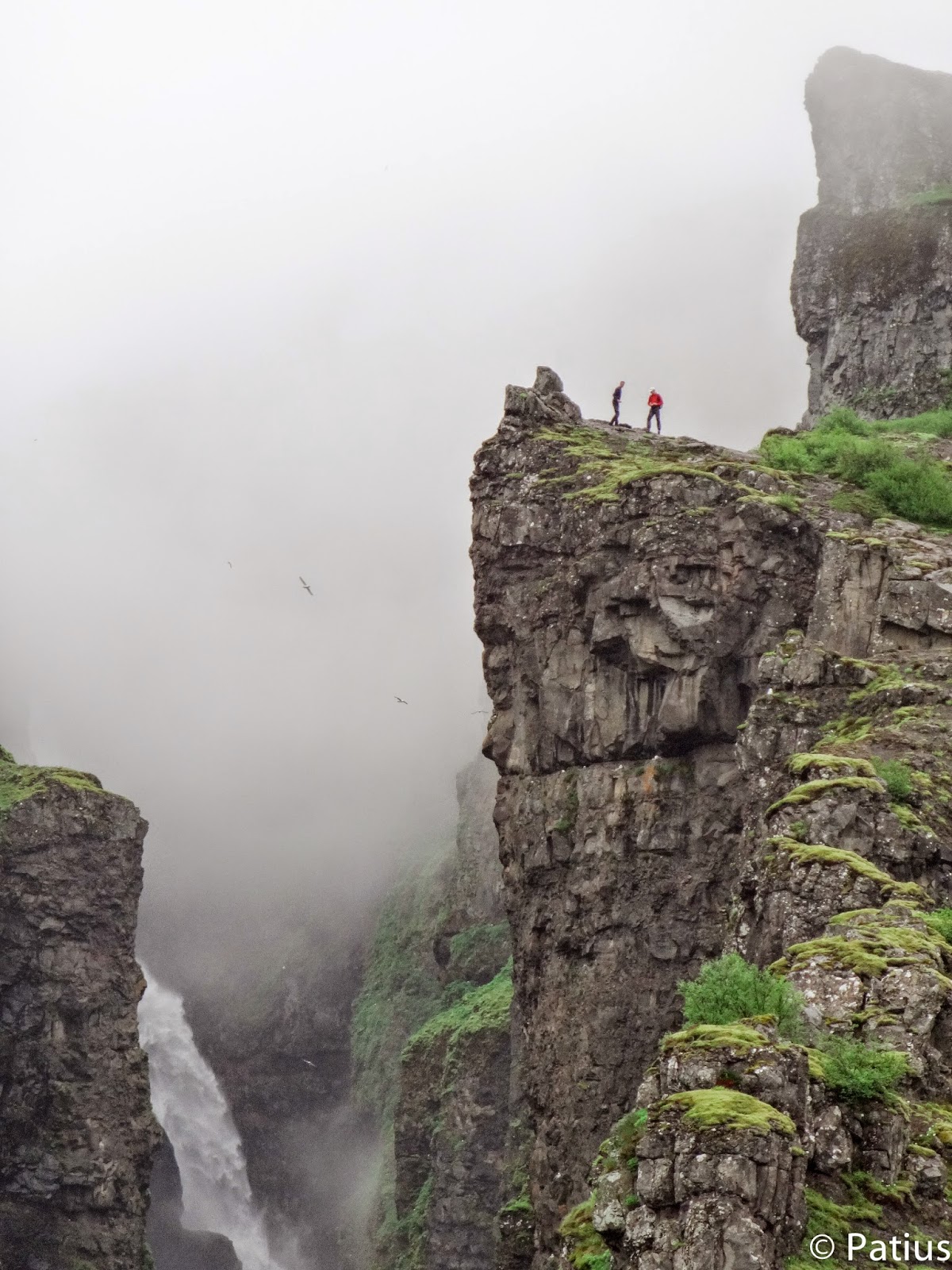 Took off again on route 1 towards Borgarnes and then took road 54 towards the peninsula. The weather until now had been wet, not rainy crazy but enough to wear a raincoat, and sometimes you had the glance of the mountains with white spots, or hidden gens behind the strong fog, then as if per magic when I arrived to the Eldborg crater it was sunny again. Initially I started to drive towards the crater, but then I realized the beauty was to admire from far and turned around and continue my trip. 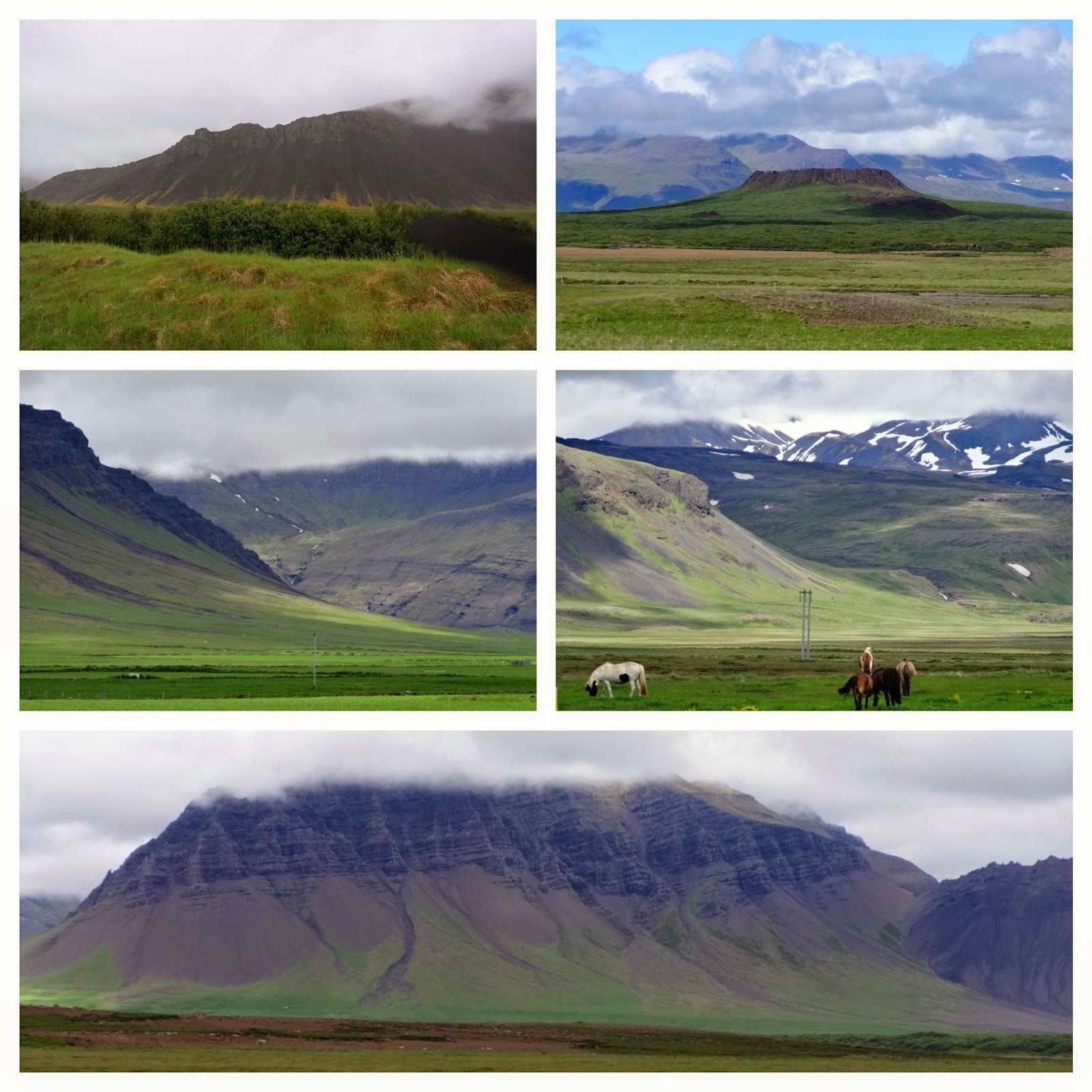 I drove by the Gerdubert basalt columns, interesting geometric formation that you will see again in other areas of the country. The most impressive of all in this peninsula is the diversity of the landscape, actually this is true for the whole country. I don’t know how many times while I was driving I would start laughing after seeing a volcanic mountain, a sandy beach, a beautiful valley, and telling myself how was it possible to have such a beautiful place.

By the time I arrived where roads 54 and 56 intersect, I stopped at the restaurant to refill my energy and fill up the tank of my Toyota Yaris.  This is when you start noticing the other travelers that are going in the same direction, and be assured you will see them again in your future stops, so I pretty much just started establishing some connections right there.  Anytime you stop, just ask the locals about the must see places, they are very proud of their region and gladly will share with you information you might not find in the books and maps you are carrying.

Ytri Tunga beach was my next stop because I was told, by my waiter, it was the place to see seals specially in the month of June. Did not get to see seals, but saw lots of tourists, good way to stretch my legs.  Next was Búðir (also called Búdir), the black church located right after the intersection of road 54 and 574. The view is just so inspiring not only when you are looking towards where Reykjavik is but also in the opposite direction.  There are waterfalls pretty much everywhere, the ones you find in the books are the most famous, and I saw some incredible double, triple and sometimes quadruple falls along the way. 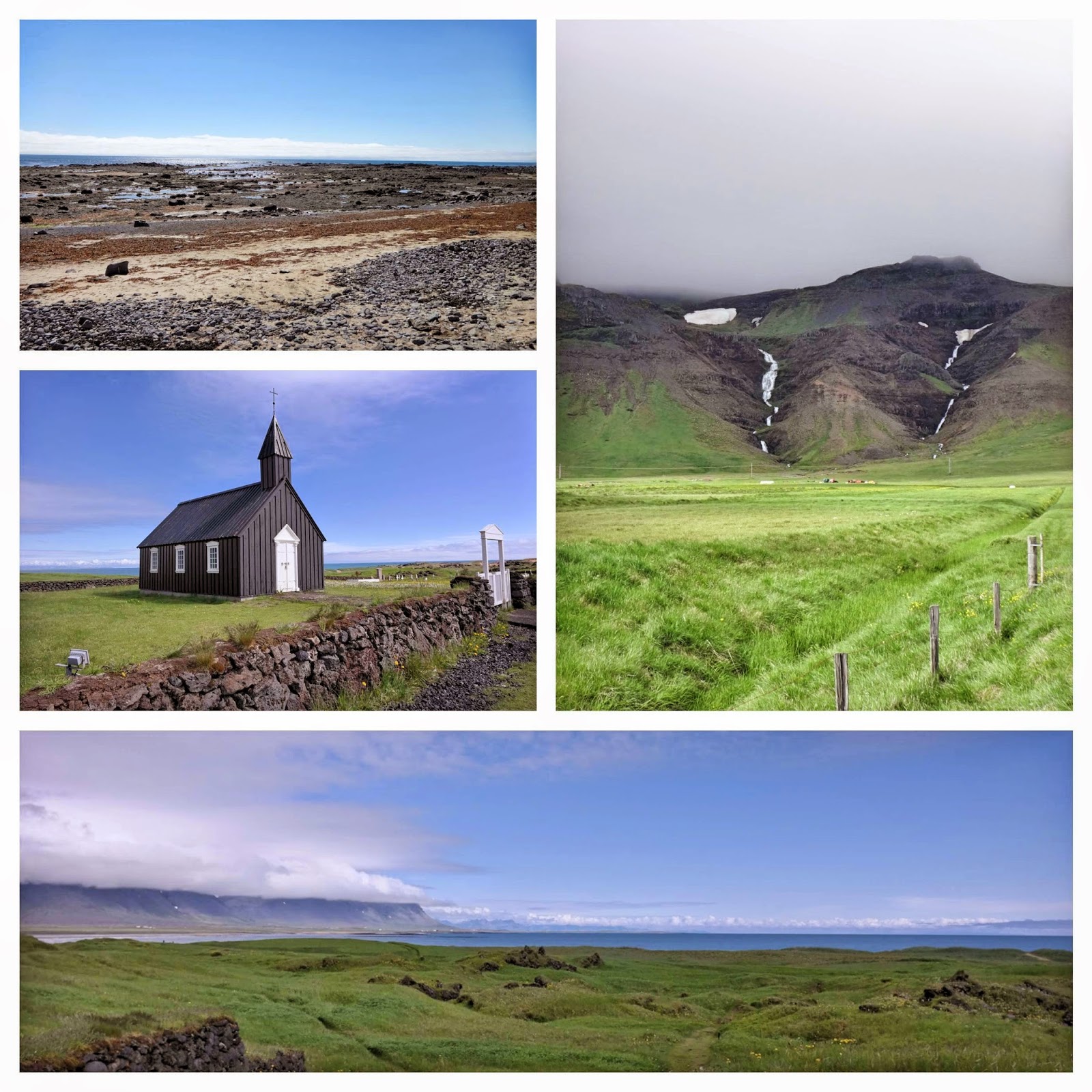 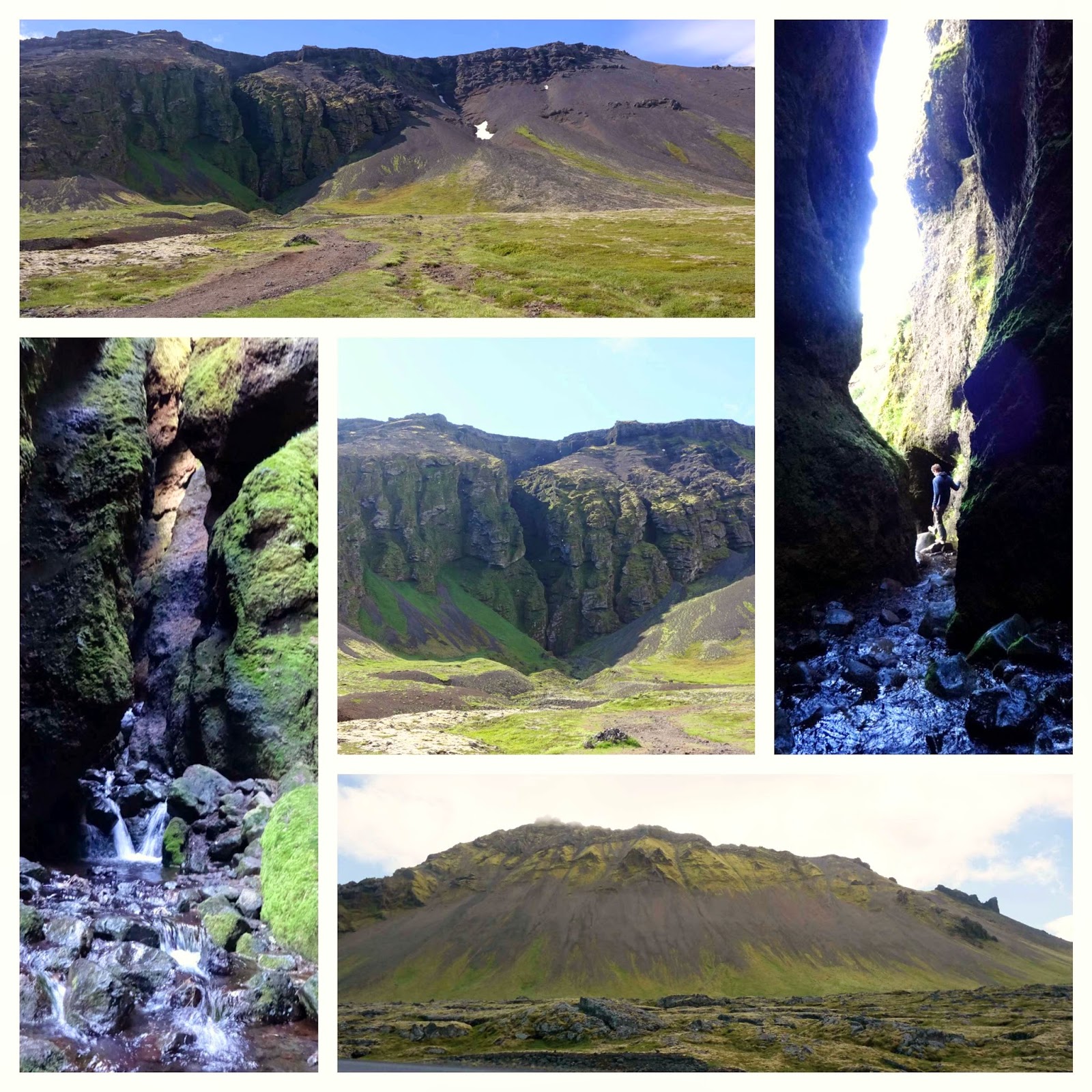 On my way to the town of Anarstapi I was, when I saw another point of interest on the road, the Rauðfeldsgjá canyon.  At first you think is a rock with a bunch of birds and a stream coming from somewhere, and I only decided to further explore this “rock” after my French buddies had decided to do it, and also after seeing someone come from somewhere on that direction.  The closer you get to the base the more you are looking for the “entrance” that is not visible, until you realize the stream is coming thru a fissure on the side of the mountain, and you have to jump some rocks in order to get into the small chamber.  What an incredible view it is inside, with green moss and the water stream coming from the split walls.  You can further explore the canyon, just keep in mind you are going to get wet with cold water. 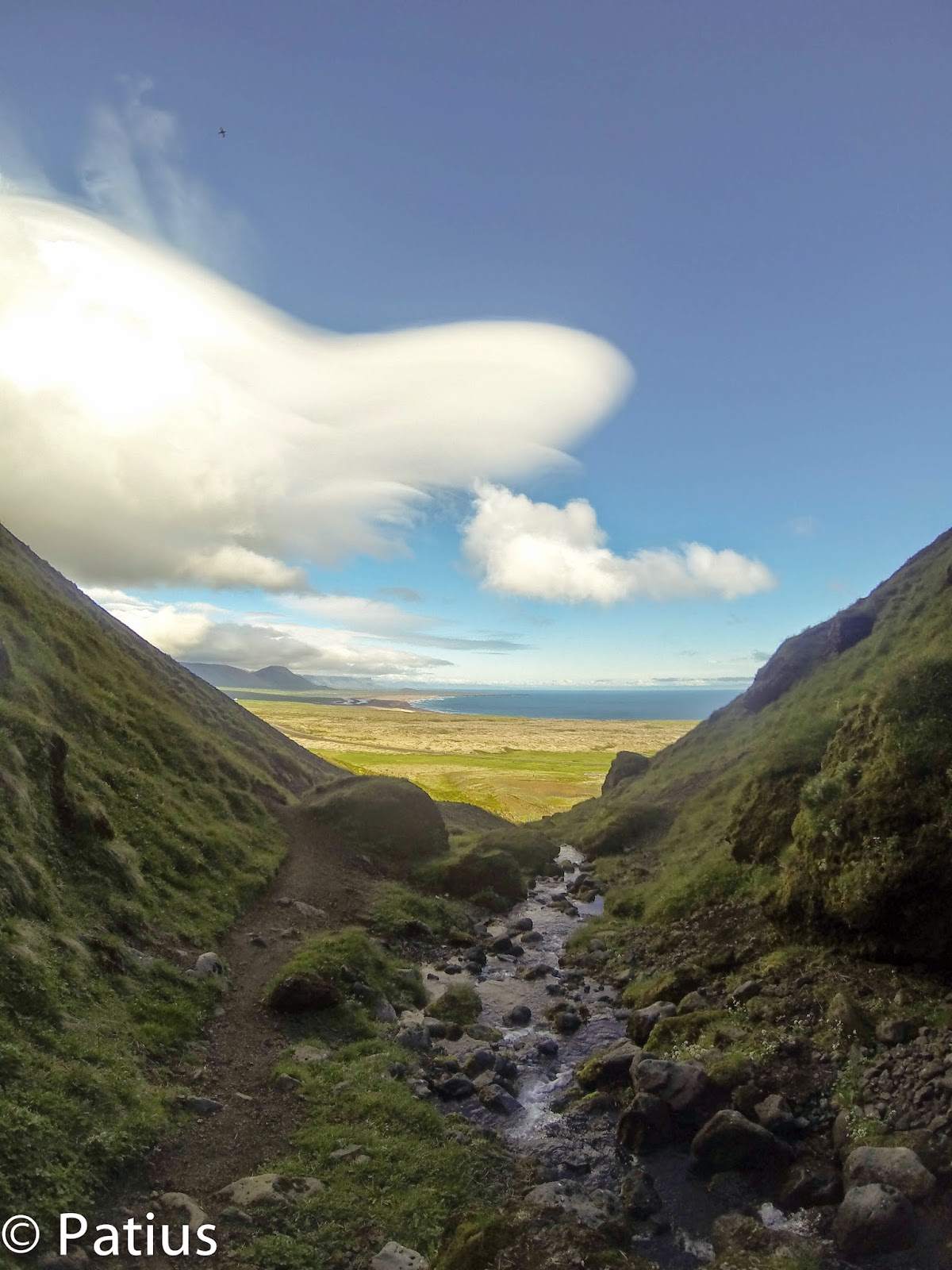 Before arriving to Anarstapi you can see the majestic Stapafell mountain, and you might actually miss the glorious valley where the town is located because you are still admiring the mountain.  This is another place you must stop and do some hiking, there are several cliffs with tons of birds, basalt columns, and lunar type of rock formation all the way to the Hellnar arch.  The amazing thing about this country is that it doesn’t where you are, there is always something beautiful to see. 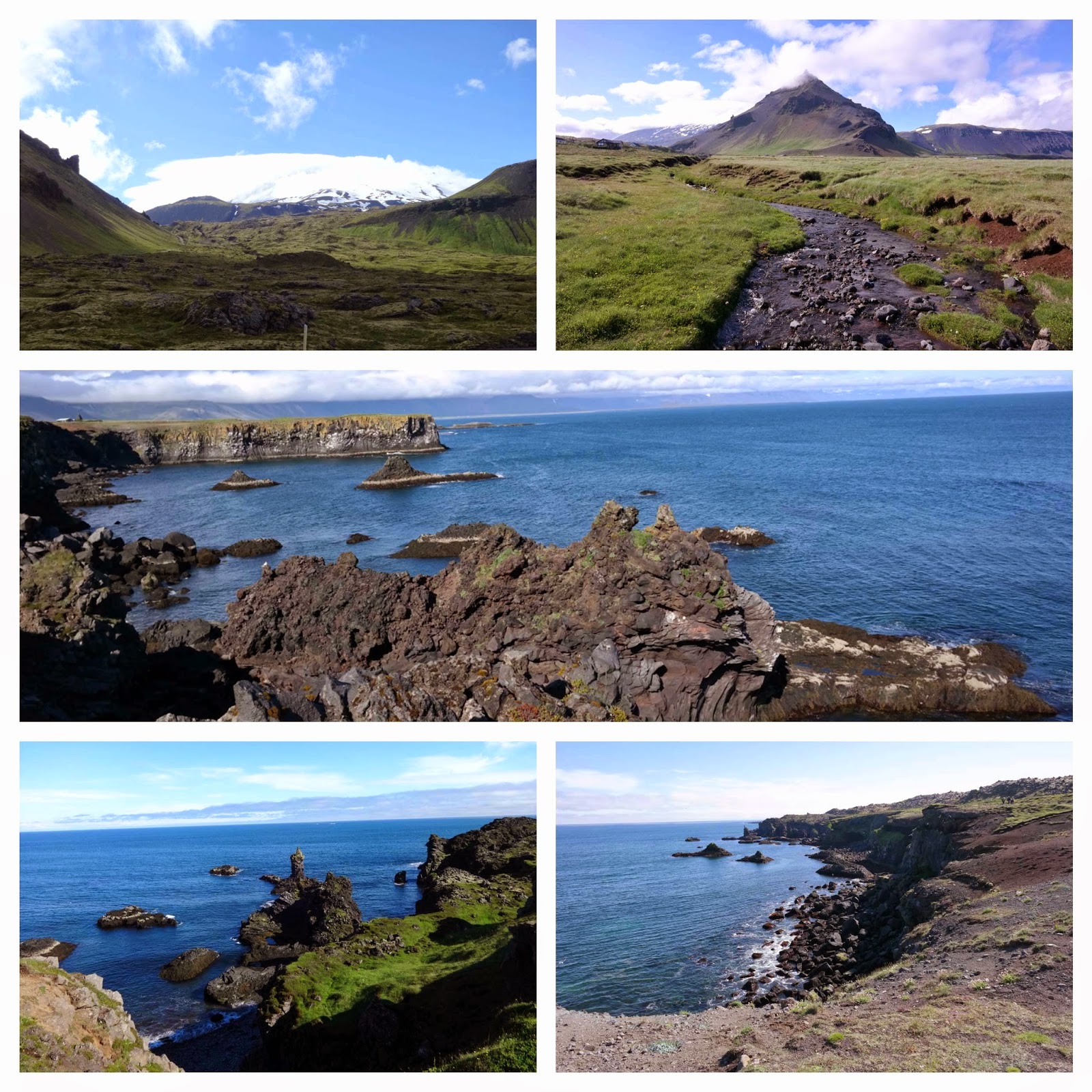 By the time I finished my hike I realized I still had a long way to go, so I called the place I was staying advising not to expect me until probably 9:00pm. 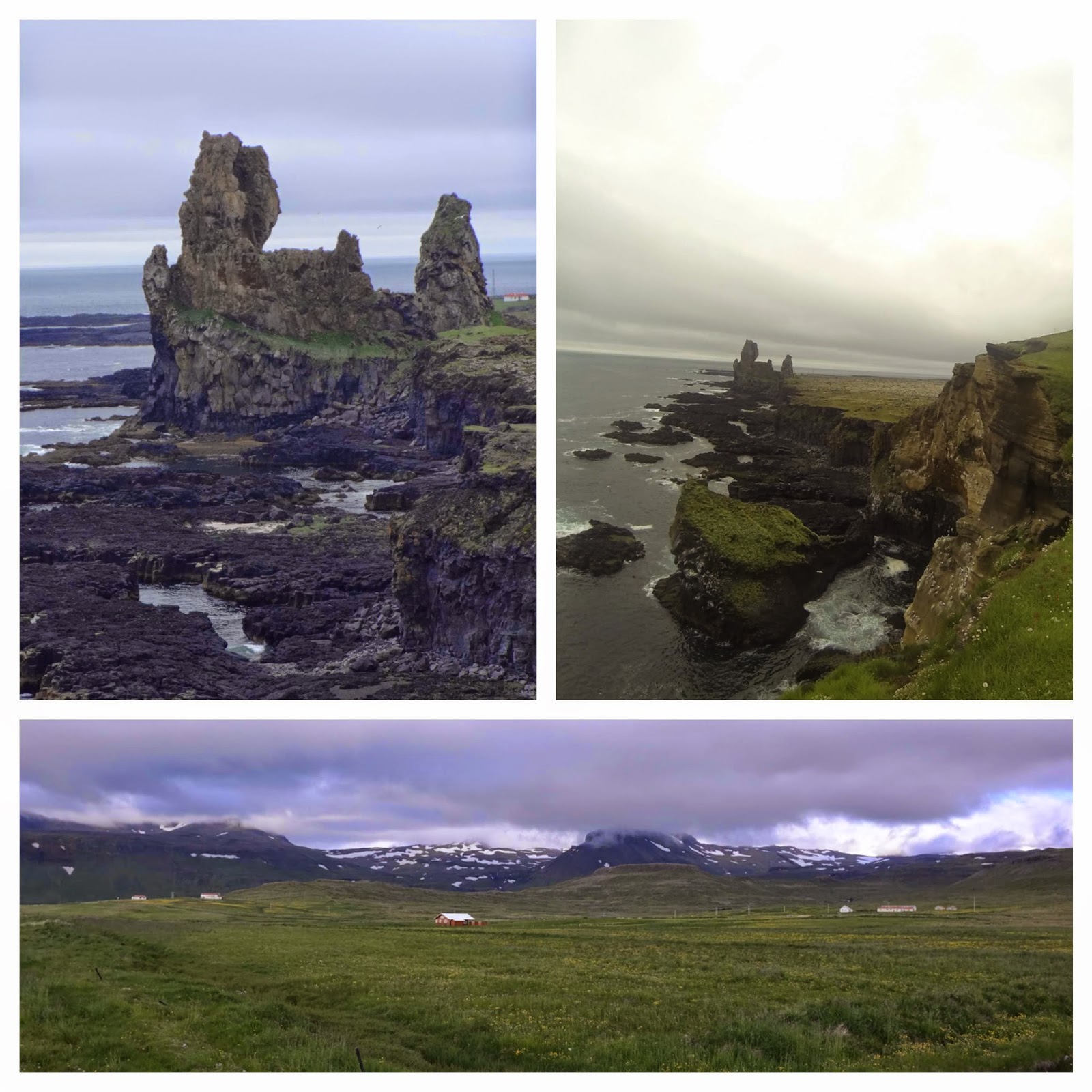 The weather had already changed and some dark clouds were covering the Londrangar basalts cliffs when I got there. This unique ancient basalt volcanic formation gives the area this dramatic look, actually I found all sights in Iceland to be somehow dramatic, either because of the colous or because the weather, or because of the landscape.

I had already entered the Snæfellsjökull National Park, and this is where you can see the volcano covered by the Snæfellsjökull glacier. If you read Jules Verne’s book “A Journey to the Center of the Earth” you will recognize this area as the starting poing of the trip.  Driving along road 574 you will encounter several light houses, little mountains, until hit the northern part of the peninsula in the Breiðafjörður bay.

The fishing port of Ólafsvík was my next stop and I was back on road 54, I had already eaten all the food in my car and I was ready for diner.  Cute town with spectacular view, but then again nothing more surprises me about this country, I was actually beginning to believe in the existence of elves.

Only 2 hours left in order to make it to my final destination of the day, in the town of Stykkishólmur.  As you can see, one day is not enough to fully appreciate this peninsula, you need at least one day to explore the south and another for the north, and let me tell you both sides are totally different.  By the time I left my Italian and British buddies in Ólafsvík, the weather was a mix of sun and fog.  Sometimes you will see a mountain surrounded by clouds with spot lights of sun touching patches of yellow grass, given you this amazing uplifting energy of beauty. I’m starting to believe that even the lambs are happy in this country. 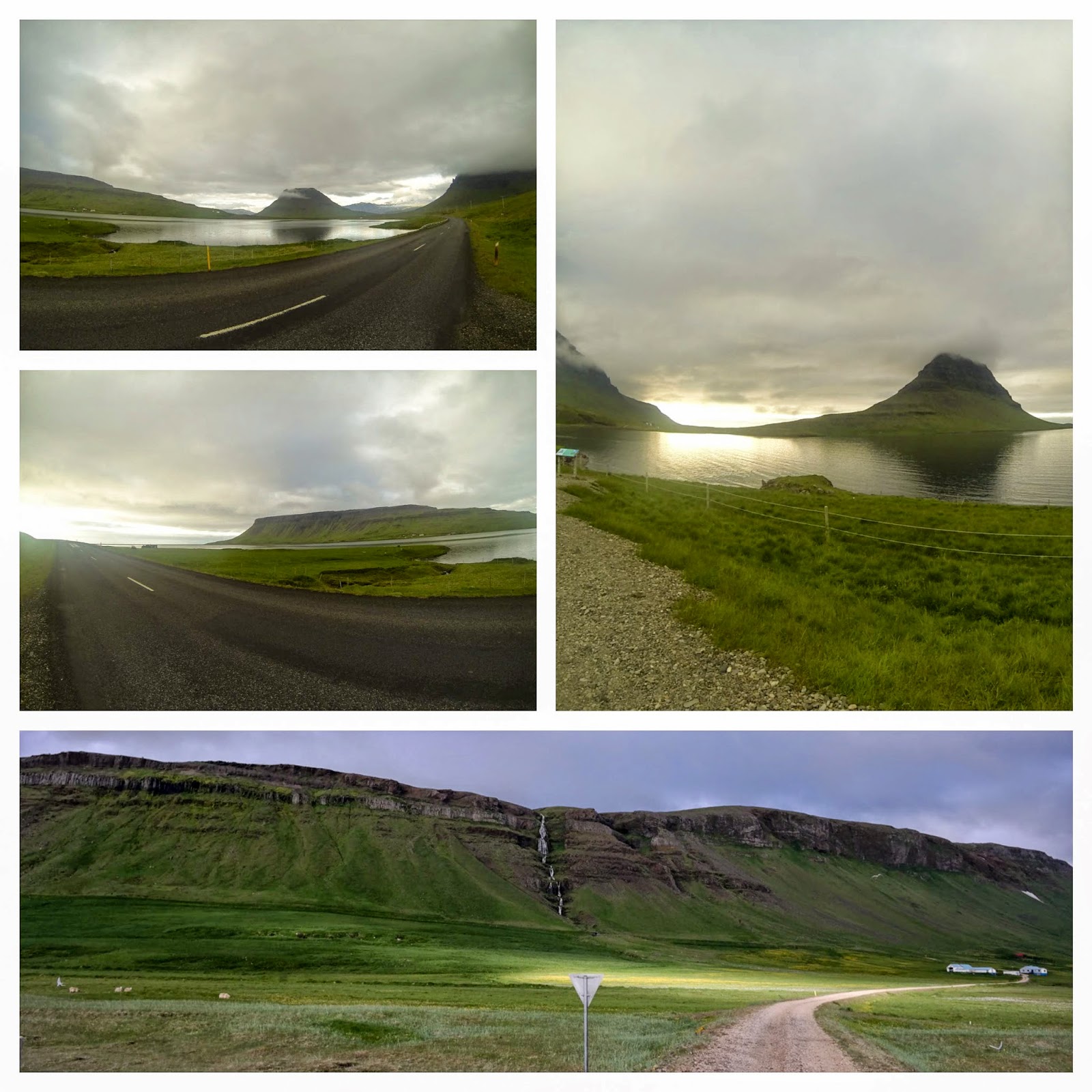 You seriously don’t know what to look, because everything is unreal, and although I had a short time to see the north side, I had decided I was going to stop anywhere.  The valleys are just precious, out of nowhere you see waterfalls falling from the mountains, beautiful lakes, and finally you get to see the famous mountain Kirkjufell, and this guy is going to follow you for a while. Just keep you eyes open because you might miss the Kirkjufellsfoss waterfall, and from the right spot you might get wonderful pictures with the mountain as your background. 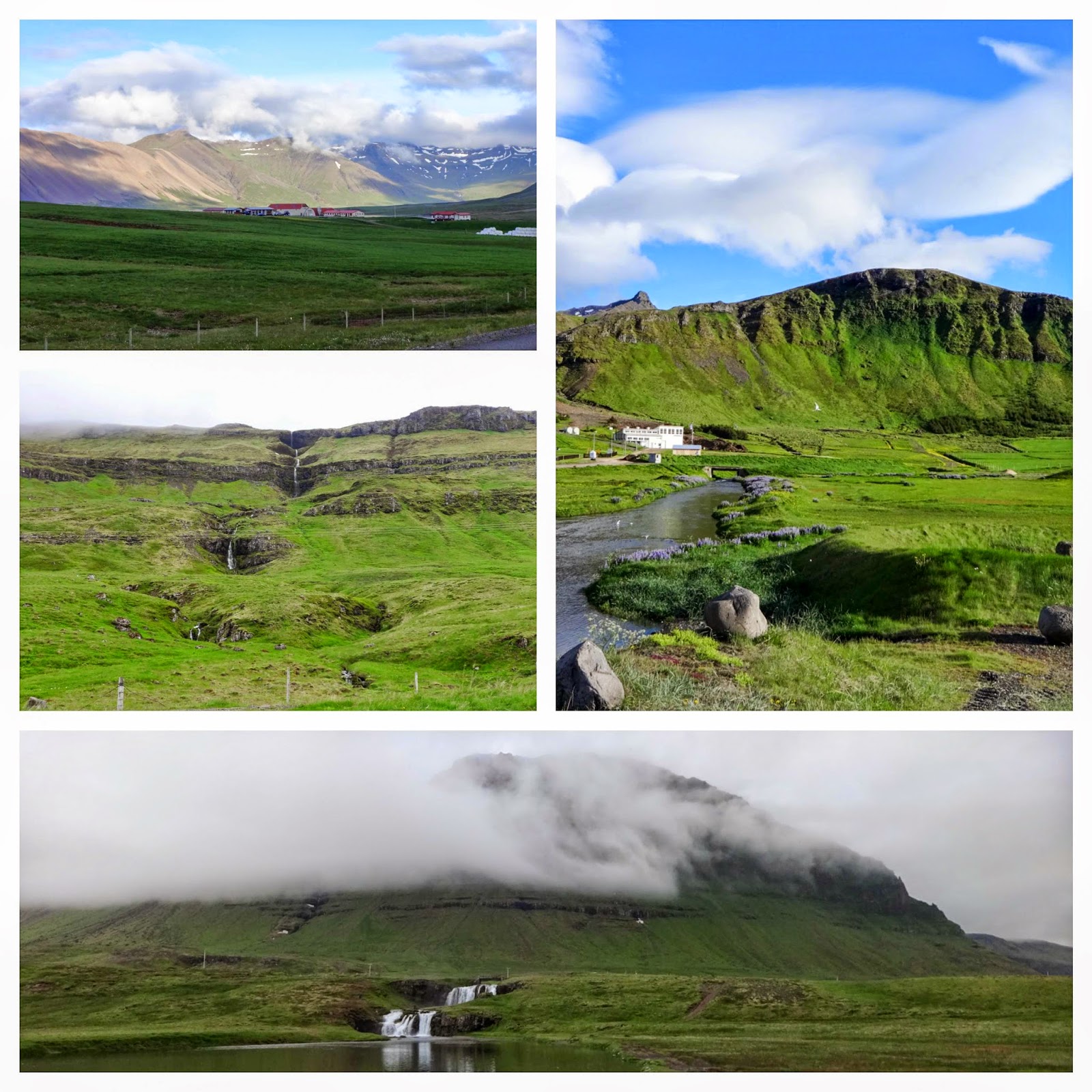 At this point I was getting a bit tired and the fog had intensified, so I just wanted to get to my bed. Drove by some small villages, saw some more amazing views until I finally made to the town of Stykkishólmur where a bed was waiting for me.  To be honest I did not explore this place, and people take the ferry to cross the bay to the West Fjords from here, which I heard is amazing.  There is an interesting concrete church and an old lighthouse on the top of the hill.

Hello. Just finished reading your post which I got the link from reddit. you just confirmed a few things for me: one, I made the right decision to travel to Iceland this summer, two, that I should have done it much earlier, three, that I might have to rethink my travel plans next time I go... Thanks.

I'm glad you enjoyed my my long post, and not if you already went or if you are going... either way, I'm sure you are going to be wowed by this island - it is so ridiculously beautiful and dramatic. Just make sure to pay attention to the speed limits

GOOD DAY AND WELCOME TO STANDARD ONLINE FINANCE LTD
Do you need 100% Finance? I can fix your financial needs with a lower back problem of 3% interest rate. Whatever your circumstances, self employed, retired, have a poor credit rating, we could help. flexible repayment, Contact us at: standardonlineinvestment@gmail.com

Apply now for all types of loans and get money urgently!
* The interest rate is 3%
* Choose between 1 and 30 years of repayment.
* Choose between monthly and annual repayment plan.
* Terms and conditions of the flexibility of loans.