June 17, 2014: Happy Independence Day Iceland, and I should had bought my travel food the night before.  Once again it was 8:30am when I left the town of Stykkishólmur towards the Borgarfjörður region, which meant to take road 58 back to 54 and South on 56 across the Snæfellsnes peninsula.

I was wondering about road 56 because it is pretty much in the middle of the mountains, unfortunately for me, it was super sunny when I started the day, but by the time I reached road 56 it was raining and foggy.  I did not feel like stoping to see the lava fields, but I did stop for the second time at the restaurant where the road 56 and 54 intersects.  National holiday and the place only opens at 10:00am, but a nice gentleman saw me and I was able to buy some chocolate bars, the ones I pretended were power bars because health. 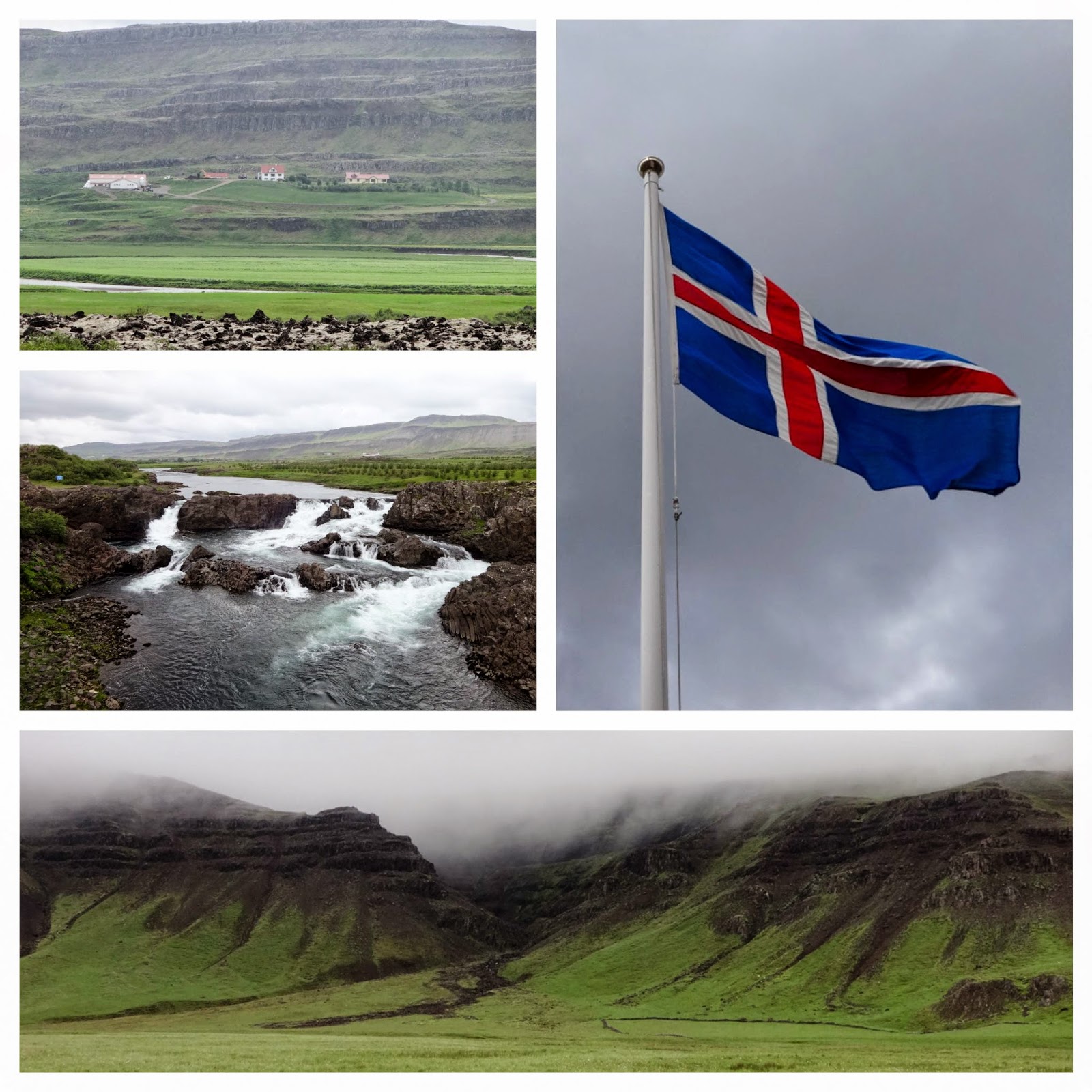 Followed the road 54 until I returned to city of Borgarnes, and then back on Road 1 because the first schedule visit of the day were the Glanni waterfall, not very well known but I wanted to see it.  Minding my own business I was when I realized there were 5 motorcyclists following me. They clearly look like members of a gang. I told myself this was like the Mad Max movie. Hoping I had a similar kind of car, I press the red button hoping for some type of weapon. Instead My Yaris gave me the hazard lights, and after a couple of clicks I accepted my fate, I was destined to be gang raped by a gang of Viking thugs. I looked around to see if I had something to make things easier in the car, and I remembered there was something in my bag, I slowed down the car ready for the Vikings when the unexpected happened: they just drove by...the nerve, not even a goodbye, just drove away, all the psychological preparedness of the last 23.5 seconds were gone like the wind. 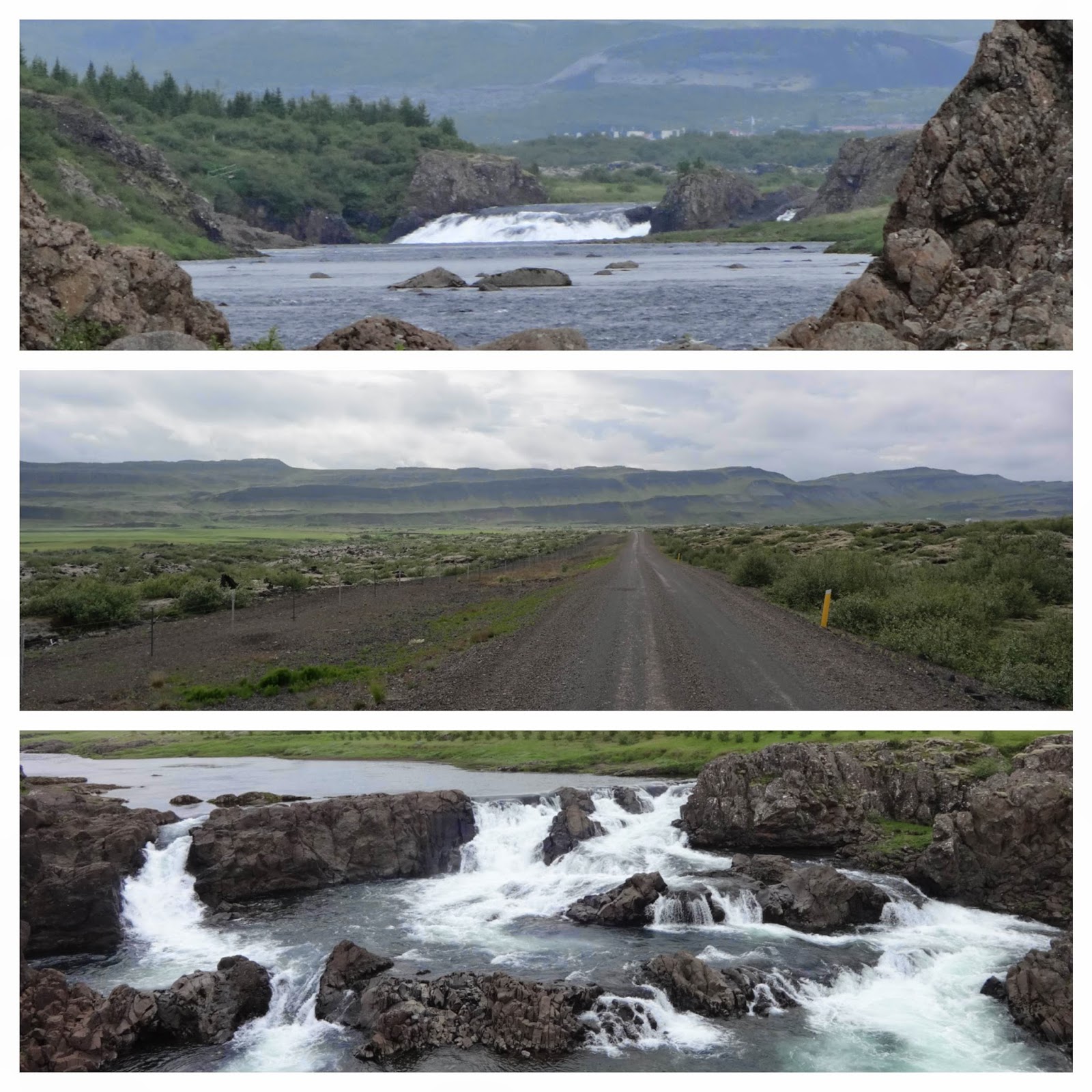 Back to reality, around the Bifröst area you will find not only the Glanni waterfall but also Laxfoss, and somehow I missed the entrance to get to Glanni. I ended up driving on a back road instead of the main one, which was fine because it gave me the chance to see a bit more of the region.  During my trip countless times I would stop somewhere not realizing there was something special right around the corner.  I also must admit I had a kamikaze GPS in my hands, because at this point this diabolic machine kept trying to send me to the no no roads.  I probably drove for 20 minutes on a no no road until I had to turned around to look for road 518 on my way to Hraunfossar and Barnafoss waterfall.


Guys, Hraunfossar is a magnificence peace of natural art, to see water tumbling from the middle of those trees into the river down below is mesmerizing and you must stop, admire for a couple of minutes and just taken in the natural beauty of that moment.  For a moment I thought I had to drive to see Barnafoss, but pretty much is just a couple of steps away from Hraunfossar, a 2 in 1 deal.  There were so many photographers in this place, and we are talking hard core professionals here, or at least their fancy cameras made me believe National Geographic was having a field trip in the area. 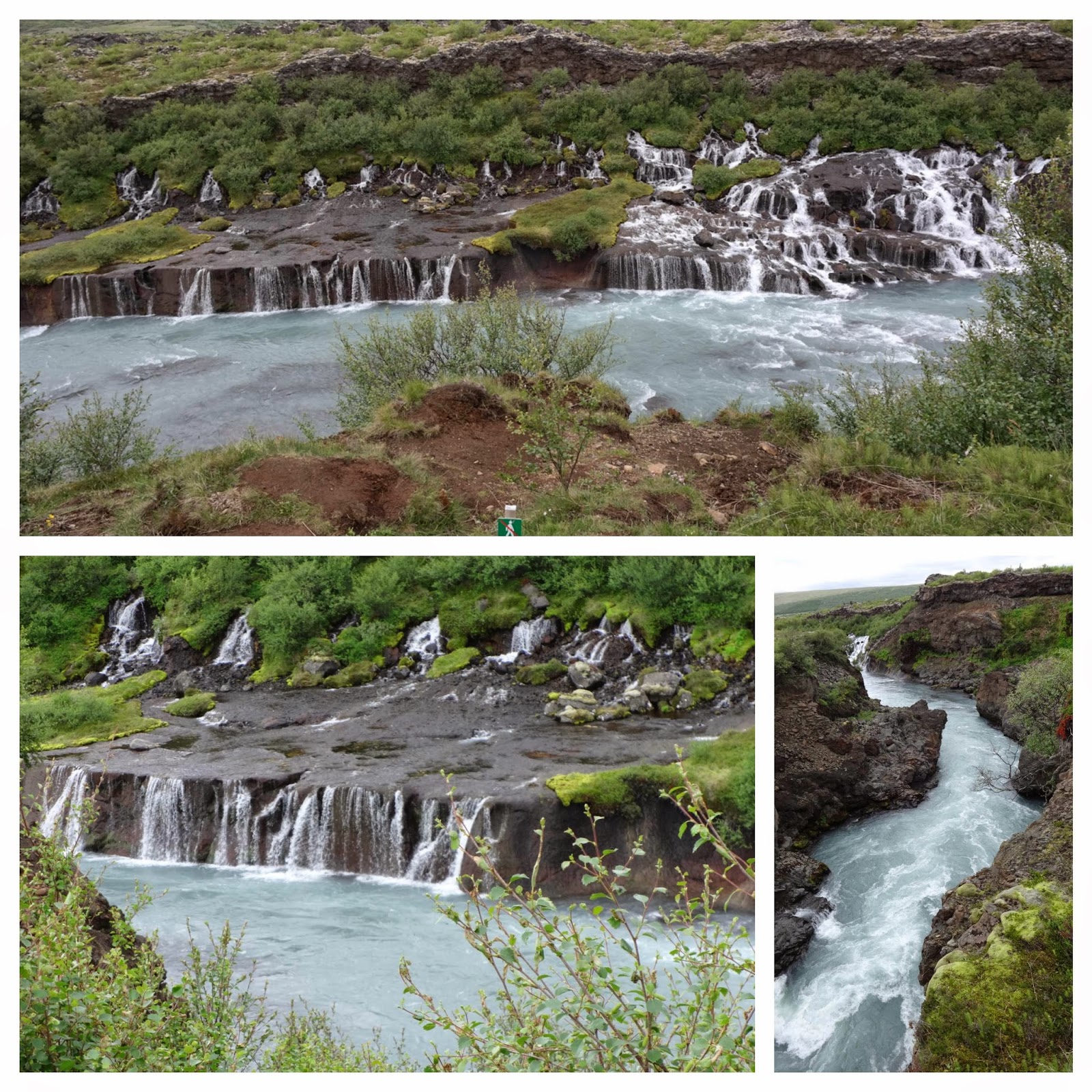 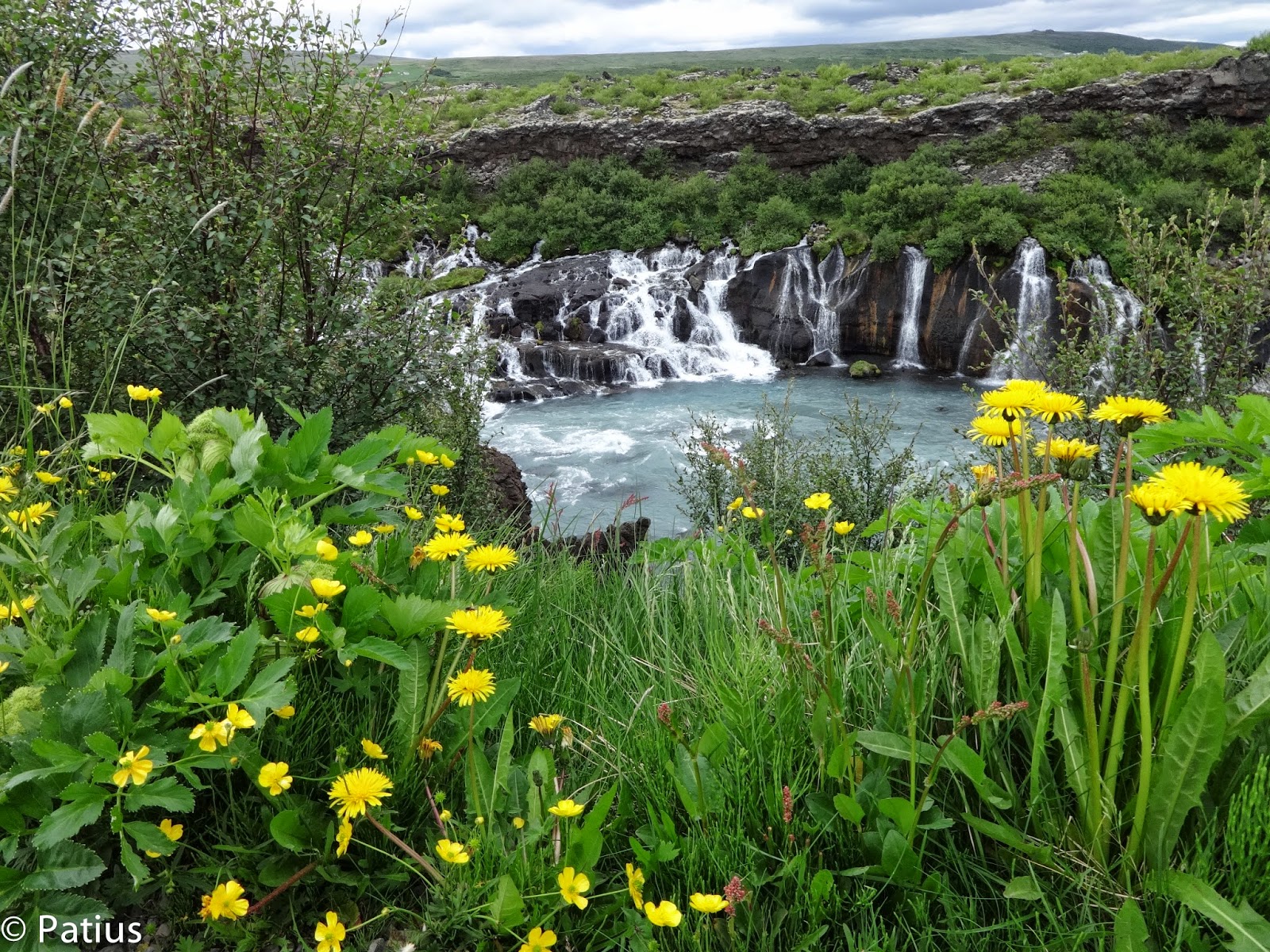 After so many wows I had to leave because there was another stop in my schedule, the famous Þingvellir (Thingvellir) National Park, a world heritage site, and it is freaking awesome place.  There was an issue, in my map it seemed I could actually drive on road 550 and then take 52 to get to my destination.  My kamikaze GPS was telling me to follow that route, until I finally asked one of the locals (yes, there were some at this place) and they told me the 550 was actually a F550, in other words a highland road and my Yaris was not up to the challenge. 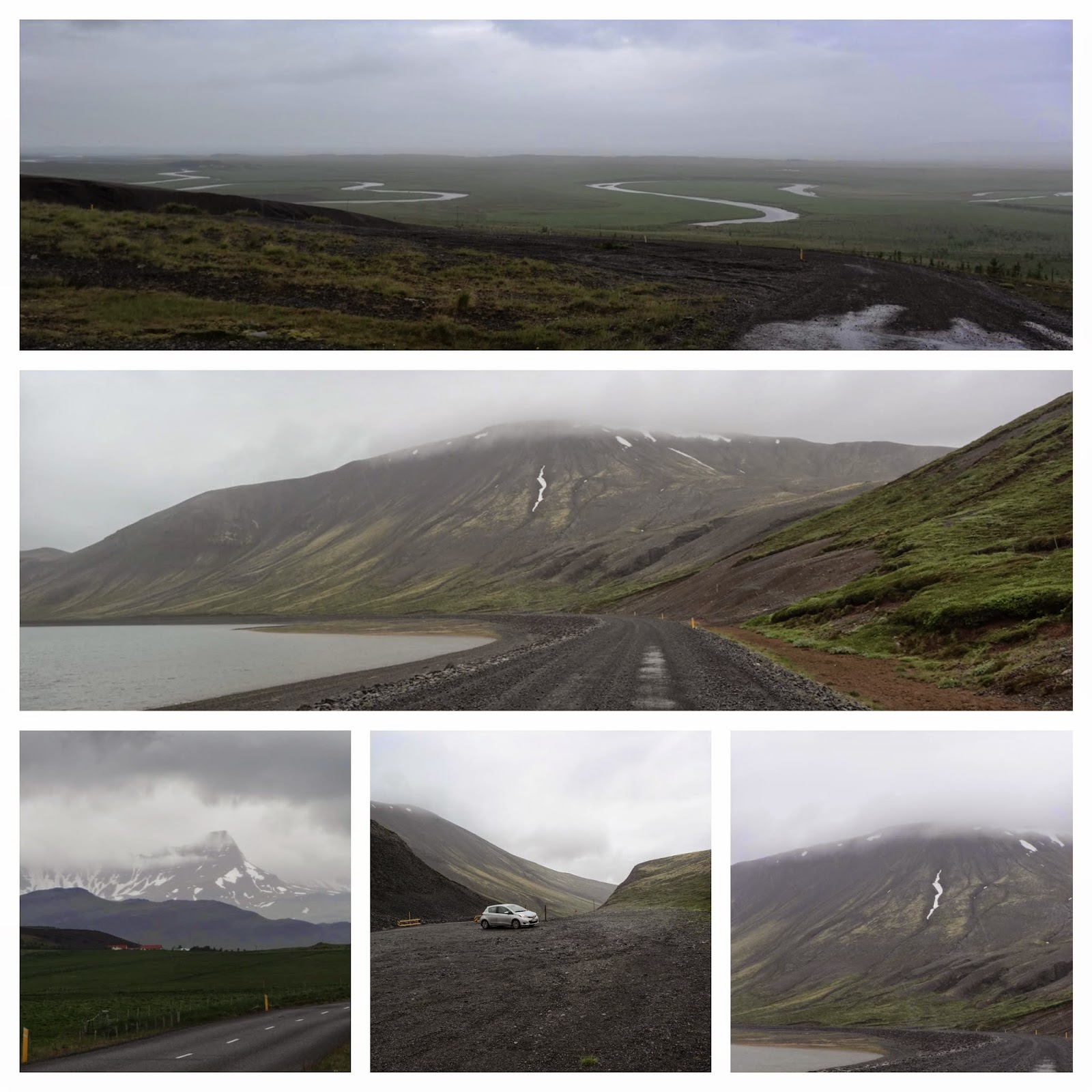 Drove back on 518 then on road 50, along the way it was rainy like crazy and i stopped at this restaurant in the middle of nowhere and had the most amazing lamb soup I have ever tried in my life. Finally I ended up turning left into road 52, and this is where I thought twice about my decision.  The sign showed road 52 turning in the last kilometers into road F550, and I was not supposed to drive on those roads, but my map was telling me I could take road 52.  I did take it and eventually it becomes a gravel road, and the more I drove the more amazing the scenery became and the more I thought I probably would have to turn around.  Eventually when it really became harder to drive I found an Icelandic lady snoozing in her car and asked her if I could keep driving on this road, she say yes because the 52 would take me all the way to my destination. My Yaris was good enough and I just kept going until I got to where the tectonic place is ripping Iceland apart, where Europe is divorcing the Americas. 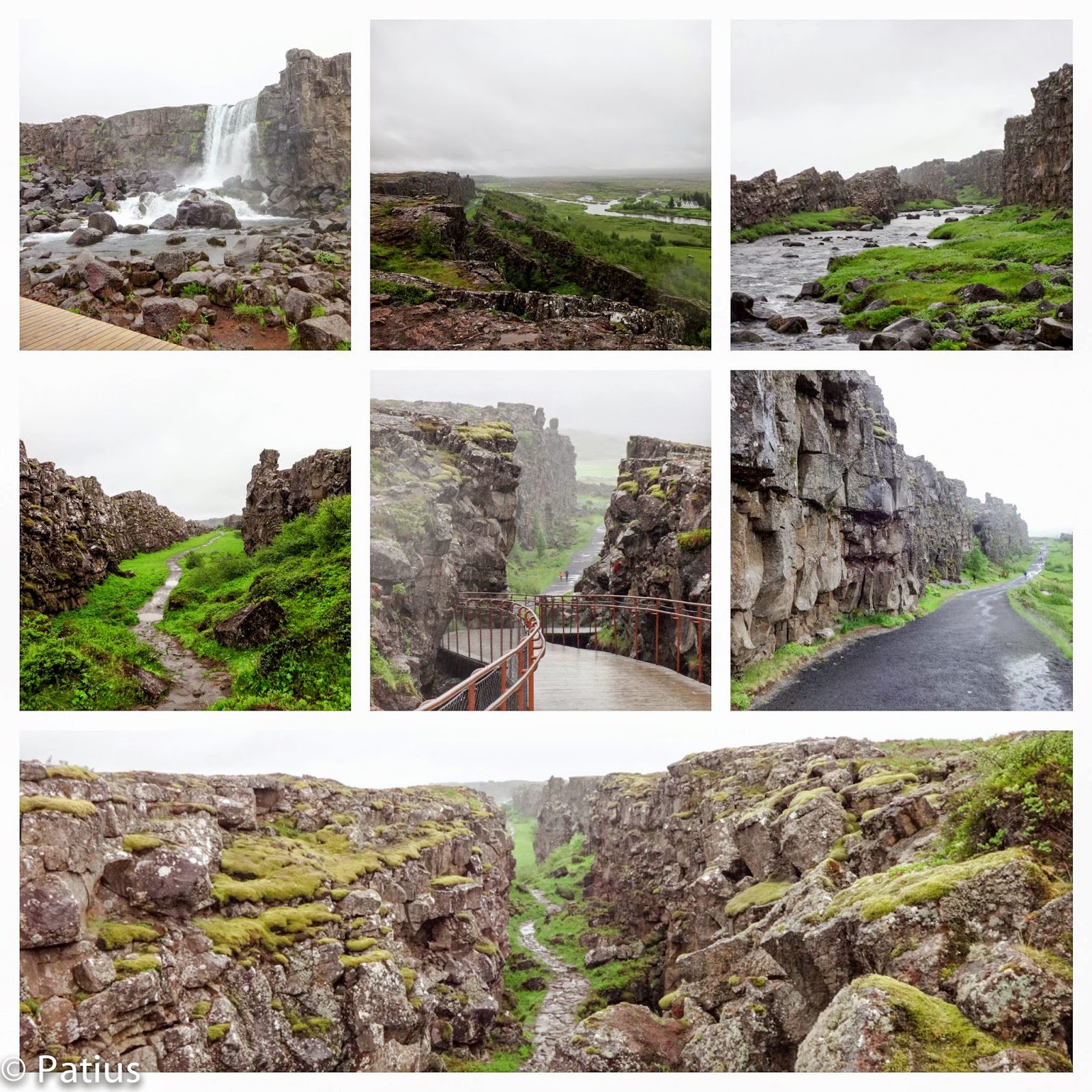 It was rainy, foggy and just miserable when I got to Þingvellir National Park, but I had a smile in my face, because I still couldn't believe there was such an incredibly beautiful country in this planet.  As soon as I parked my car I met this South African couple and I asked them what should I see first, because I noticed there were 2 main points of interest from the parking lot.  They told me to do everything and this is what I did.  First I walked towards the right, where this wood path took me to this waterfall, just beautiful and this is where I really wished  it was sunny right at that moment, because this Þingvellir valley must look amazing with the blue sky and the sun shining all over the place.  I also brought my scuba diving card just in case I wanted to dive at the Silfra lake, which people claim to be just crystal clear - I did not dive.  After I had explored the right hand side, I went to the left and walked thru those rifts, the place were the first Parliament was established in 930.

Once I finished my visit I drove to my hotel located on road 365 in the Laugarvatn area, which was cool because it would take me closer to my first next destination of the following day, the Geysir.