Vík is such a photogenic town, and if you are traveling eastward you have to go by this impressive valley before arriving to Vík,   The night before I stopped by to have dinner and I wish I had taken pictures because the weather was great. 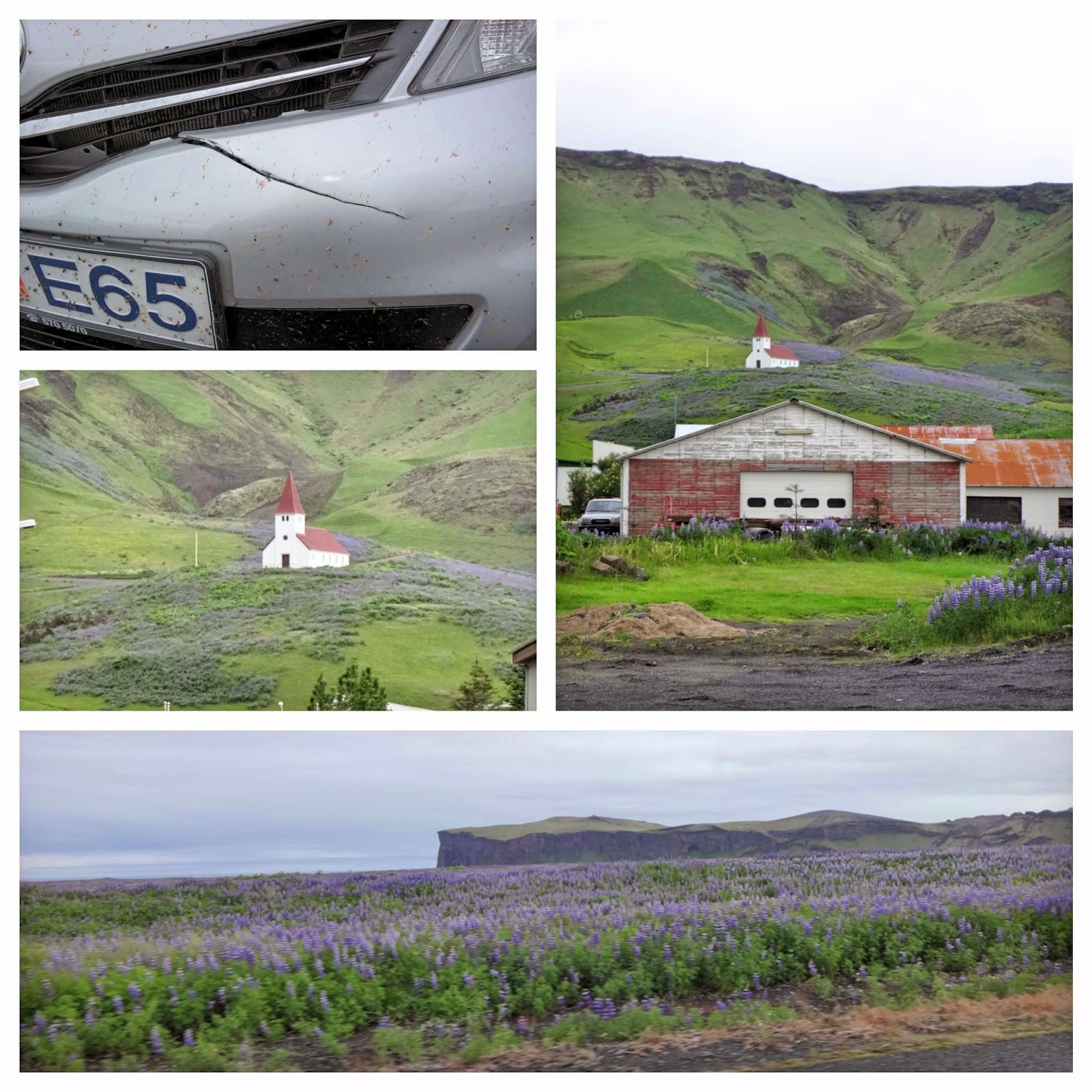 I left the guesthouse early, and driving my little car thru the valley I just mentioned, I was following a car, there was another behind me and the wind was really strong.  Out of nowhere an object flew out of the mid size truck that was driving in the opposite direction.  The object hit the front of my car making an incredible loud noise. I was only able to safely stop when I arrived to Vík, and this is when I finally saw the damaged in my little Yaris.  Yankov didn’t look happy at all, specially since the bumper would have to be eventually replaced thanks to the newest fashion statement in my car: a bumper crack .

The weather was crappy as well, and the amazing pictures I was hoping to take while in town would have to wait until I returned later on the day.  Today my destination was the Jökulsárlón glacial lagoon, where pretty much the Vatnajökull Glacier is melting in the ocean.

There were other things I wanted to do today, but the lagoon was the first stop.  Obviously I was trying to shrug off the incident with my car, gratefully I have a happy and optimistic personality, so here I was driving down road 1 trying to find something positive about what had just happened. 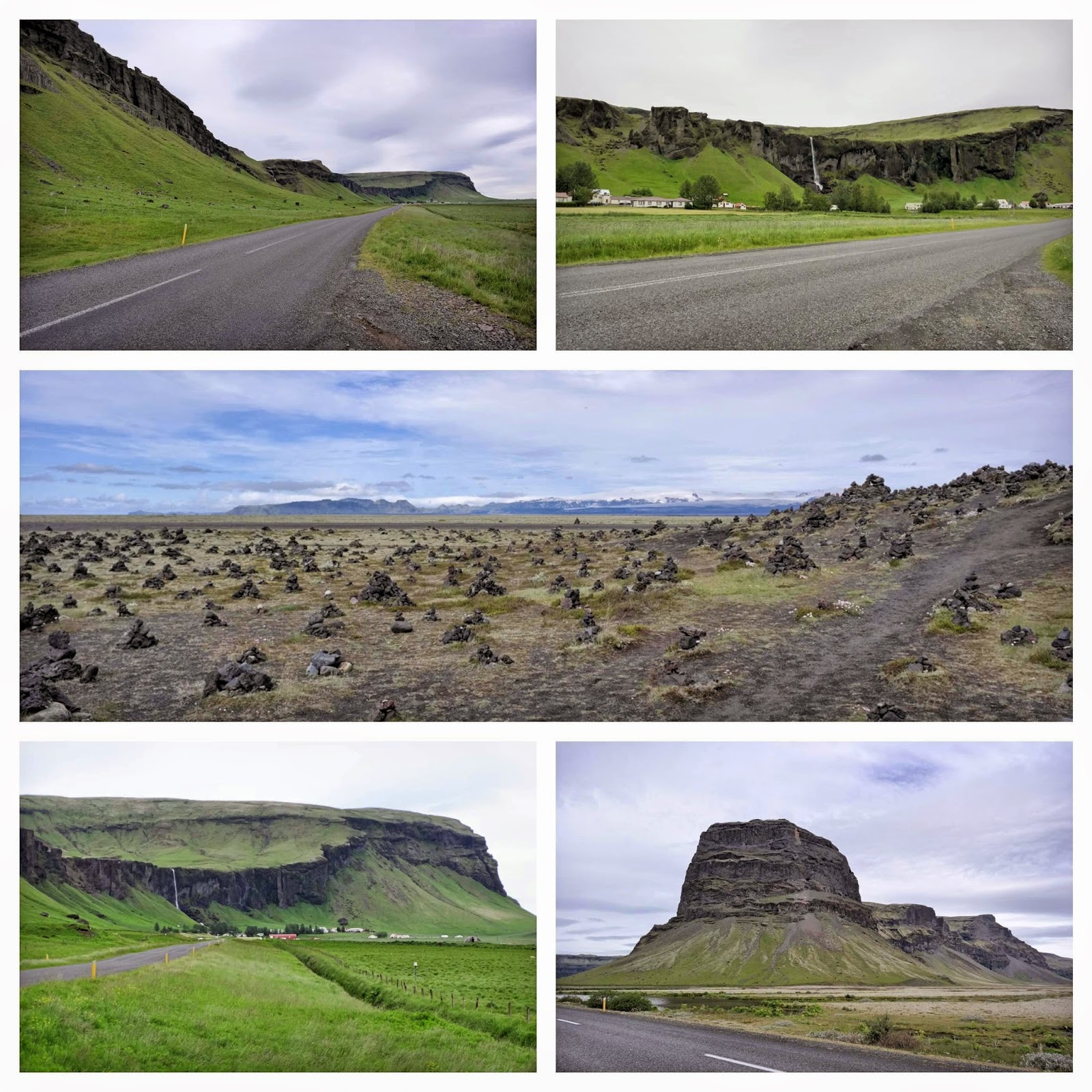 The Lupine fields are impressive, and you will see them not longer after leaving Vík.  Fun fact: the Alaskan lupine was actually introduced in Iceland in 1945 as a mean to fertilize the soil and stop erosion. This purple invasive flower found the perfect place and conditions to flourish in the island.  It does look pretty and I saw it everywhere I went.

Along the way you will be busy admiring and enjoying the landscape, and you will stop many times.  I wished I had time to explore the area around Kirkjubæjarklaustur, this cute village with tons of hidden jewels.  The waterfall behind the village is so beautiful and too bad I missed the exit to see it up and close.

Remember how I felt when I saw the Sholheimajökull glacier?  Apparently I had seen anything yet because by the time I saw the Vatnajökull Glacier I literally had to stop the car. I think that’s the mother of all glaciers - then again I haven’t seen the ones in Canada.  It is impressive, massive, beautiful and breathtaking.  I should note I was not the only one stopping to admire this beast, safely of course.

Kept on driving and when I was in the middle of the lava desert of Skeiðarársandur I stopped the car in the side of the road, turned on the hazard lights and took some pictures of the glacier.  I had a schedule so I continue my journey, and I hadn’t driven 2 minutes after my last pit stop when a police car coming in the opposite direction turned on his lights and signaled to stop.

I knew I shouldn’t had stopped to take a picture, but I know I took all the precautions. The uniformed viking introduced himself and informed I was speeding, driving at 108km/h on a 90km/h area.  I guess the fascination of the glacier, me trying to forget about my earlier incident, and perhaps after my stop I tried to return to my cruising speed without realizing I had gone over the speed limit. 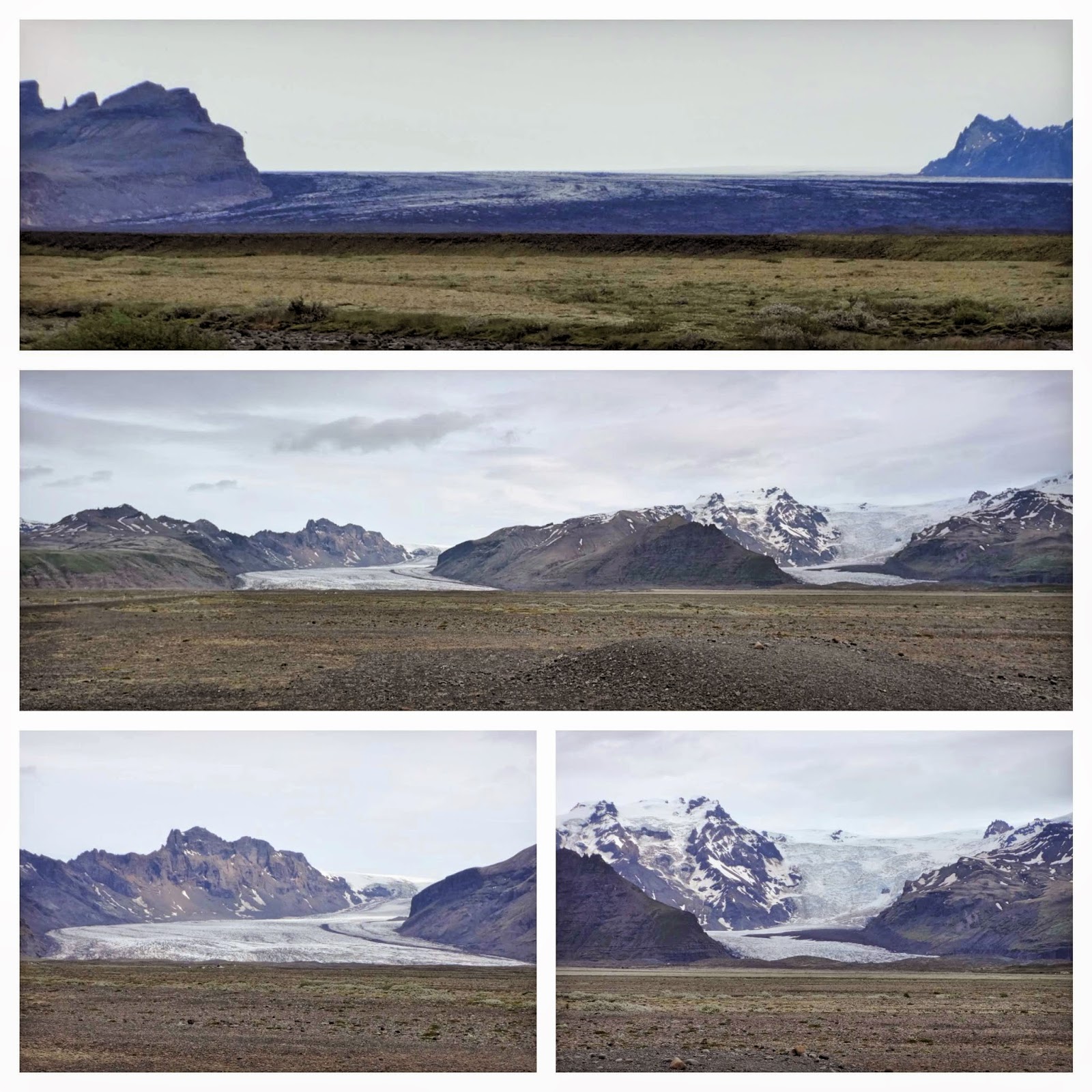 The officer invited me to the back seat of his cruiser, where a camera was going to record our conversation, it was very cozy and I definitely recommend the experience. The ticket was around USD 300.00 but if I paid immediately I would received a 25% discount.  Painful and costly let me tell you, but remember how I’m always trying to find a positive spin to everything that happens to me?  Well then, I informed the viking officer I wanted to report an earlier incident in the Vík area.  Initially the officer thought it was a dent on the car, but when he saw the crack in my Yankov the incident became serious and he wrote a report, took pictures and informed me I could get a copy of the report in any police station in the country. I wished I had shown my crack earlier, no pun intended, probably it would had saved me a speeding ticket. 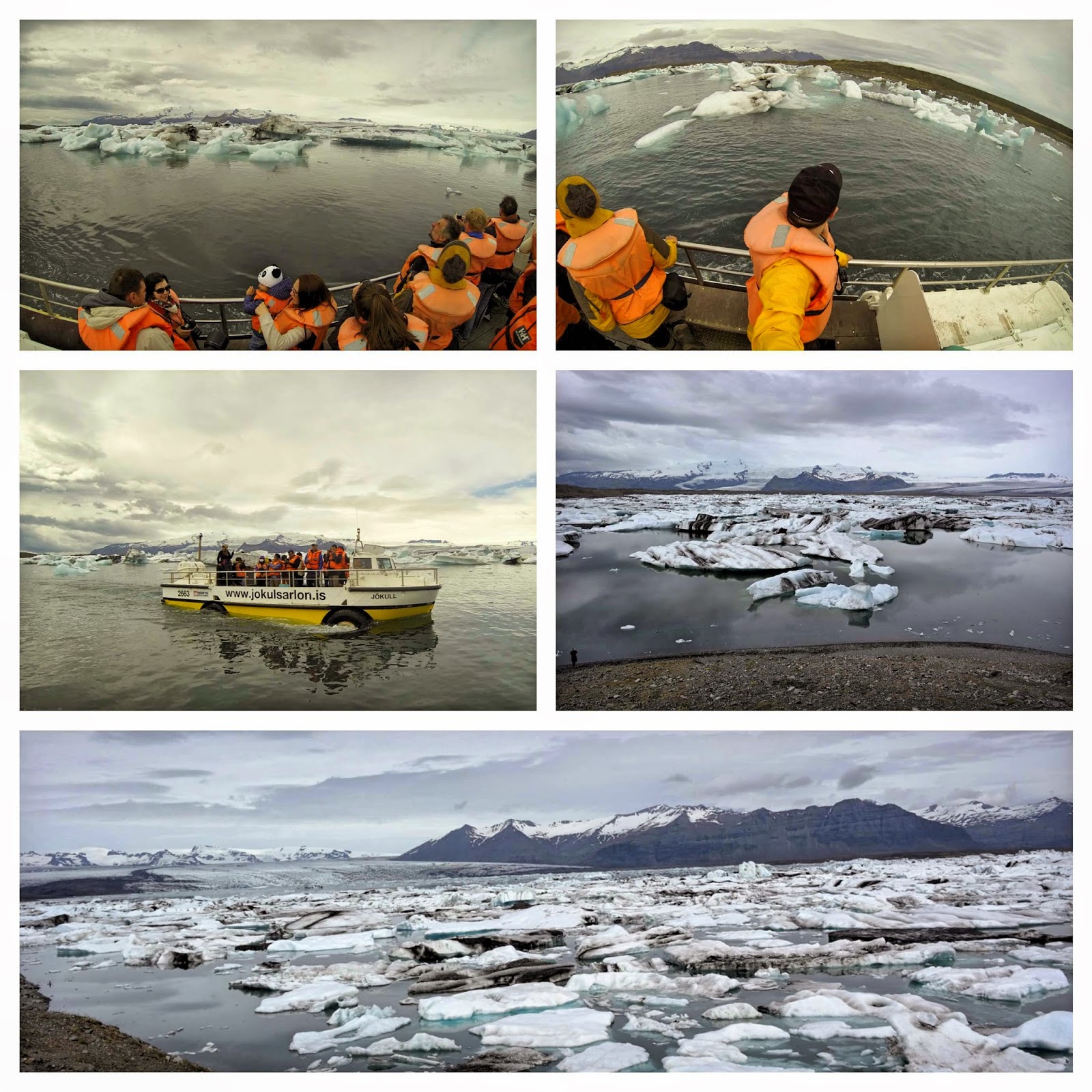 The show must go on, and along the way some of the landscape looked like the surface of the moon.  I stopped in one of the rest areas and to my surprise behind the rocks I found the lagoon with icebergs.  It really doesn’t matter where you in Iceland, there is always something that will surprise you, just walk a bit to find it.  Drove another 5 minutes and made to the base of the Jökulsárlón glacial lagoon.  Lots of cars and buses parked, and I didn’t drive this long just to watch the icebergs from the shore right?  There are different companies and I think they all charge more or less the same price. Meet some interesting characters and after the boat tour I decided to have my well deserved lunch. 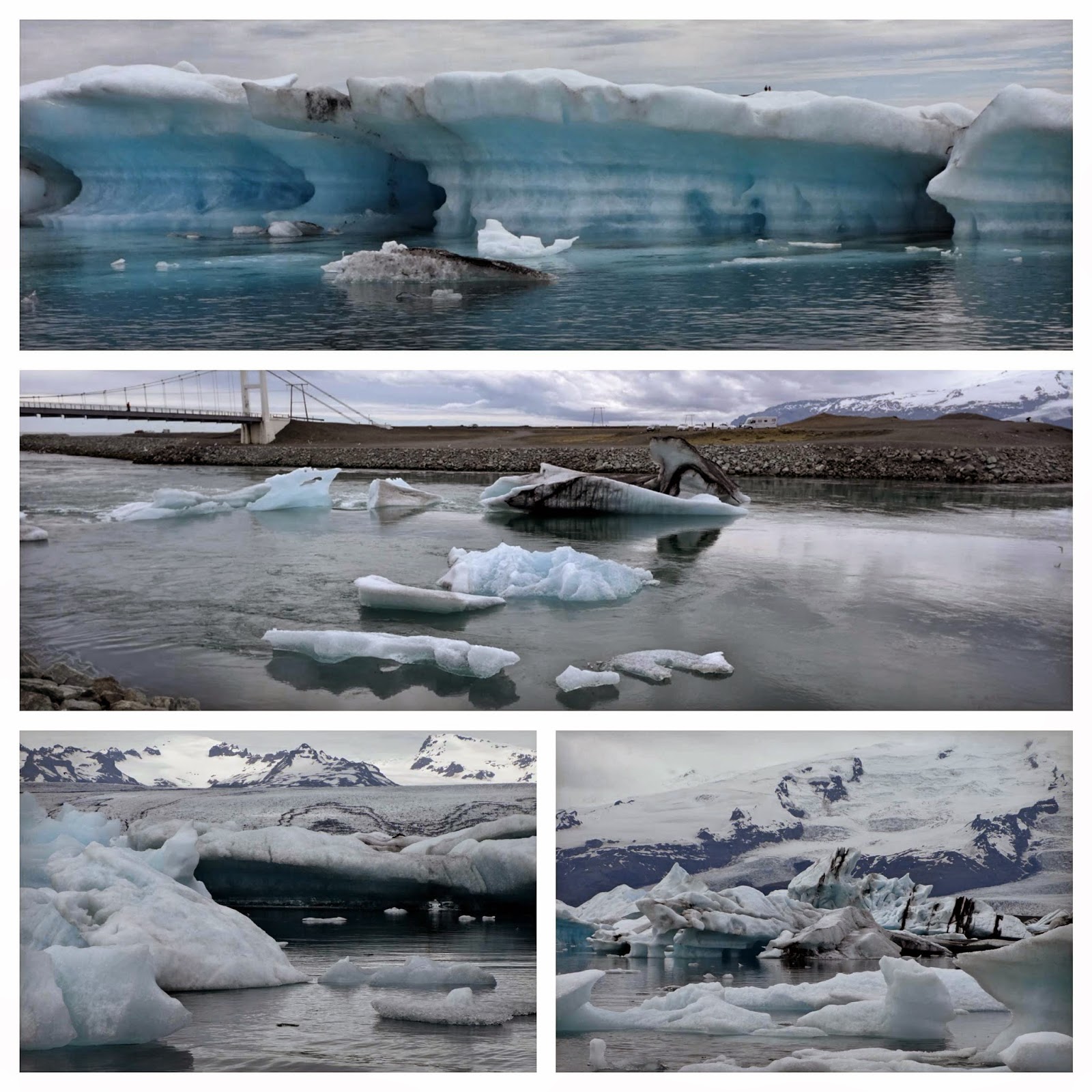 You should go to the beach as well, there you will find those icebergs that were rejected by the ocean melting away in the sand.  Very peculiar view, and pay attention to those freaking South African birds, because they will keep trying to assassin you. 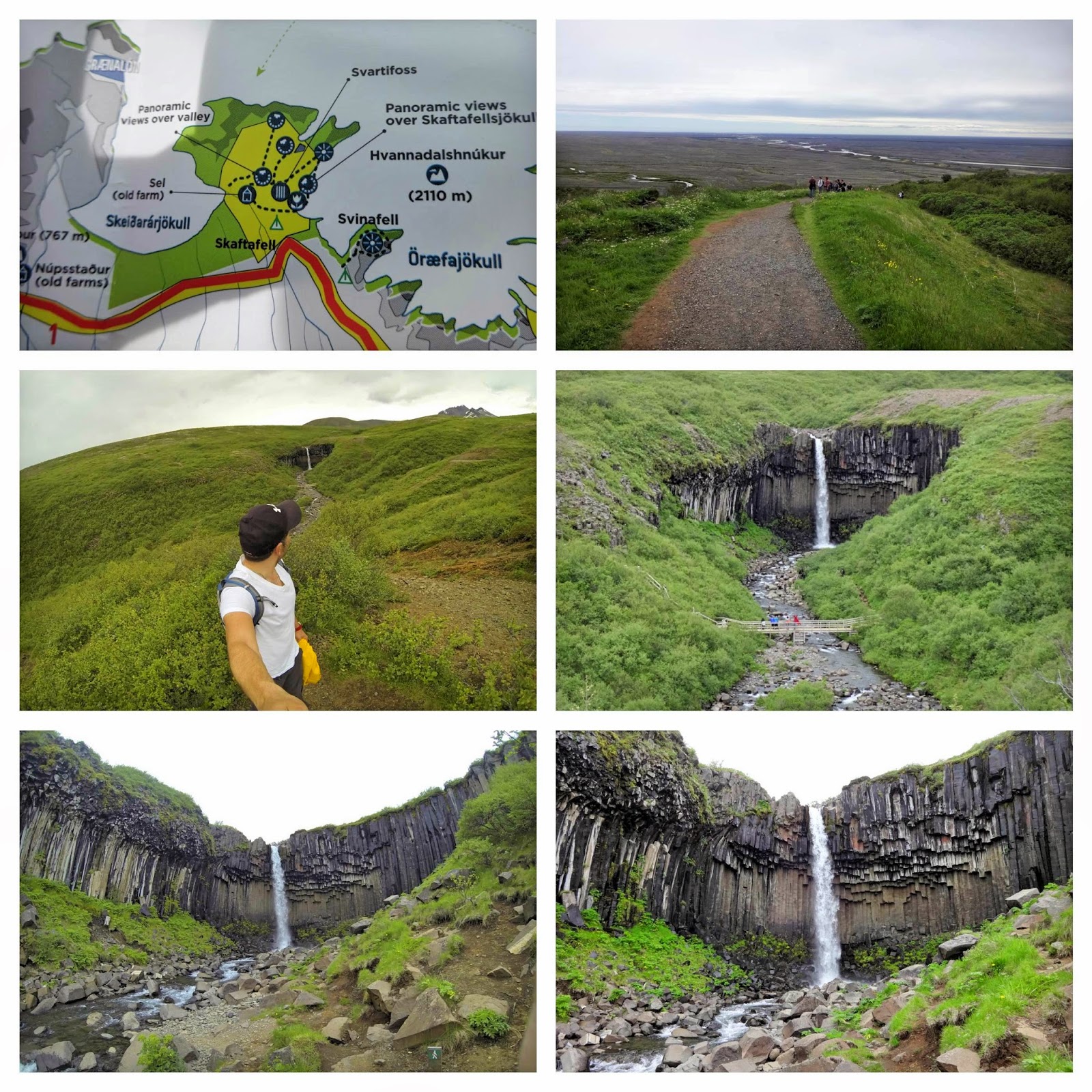 Ingólfshöfði was the suggested next stop, the bird cliff in a private nature reserve, but this was a 3 hours tour, I love birds but I had other plans in my head, so I keep driving to the Skaftafell National Park.  Keep in mind now I was driving westwards towards Vík.

First thing I did was to stop at the Visitor Centre and informed myself about the hiking trails, and let me tell you they have all type of trails, you could spend days here, and they also have an excellent campground.  The beautiful Svartifos waterfall is located in this park and it was the first place I went. Beautiful basalt columns constantly washed by the river, stunning. Keep walking and you will reach the place where you have the magnificence panoramic view of the valley, the view of the lava fields, don’t forget to visit Sel, the old farms with grass roof. 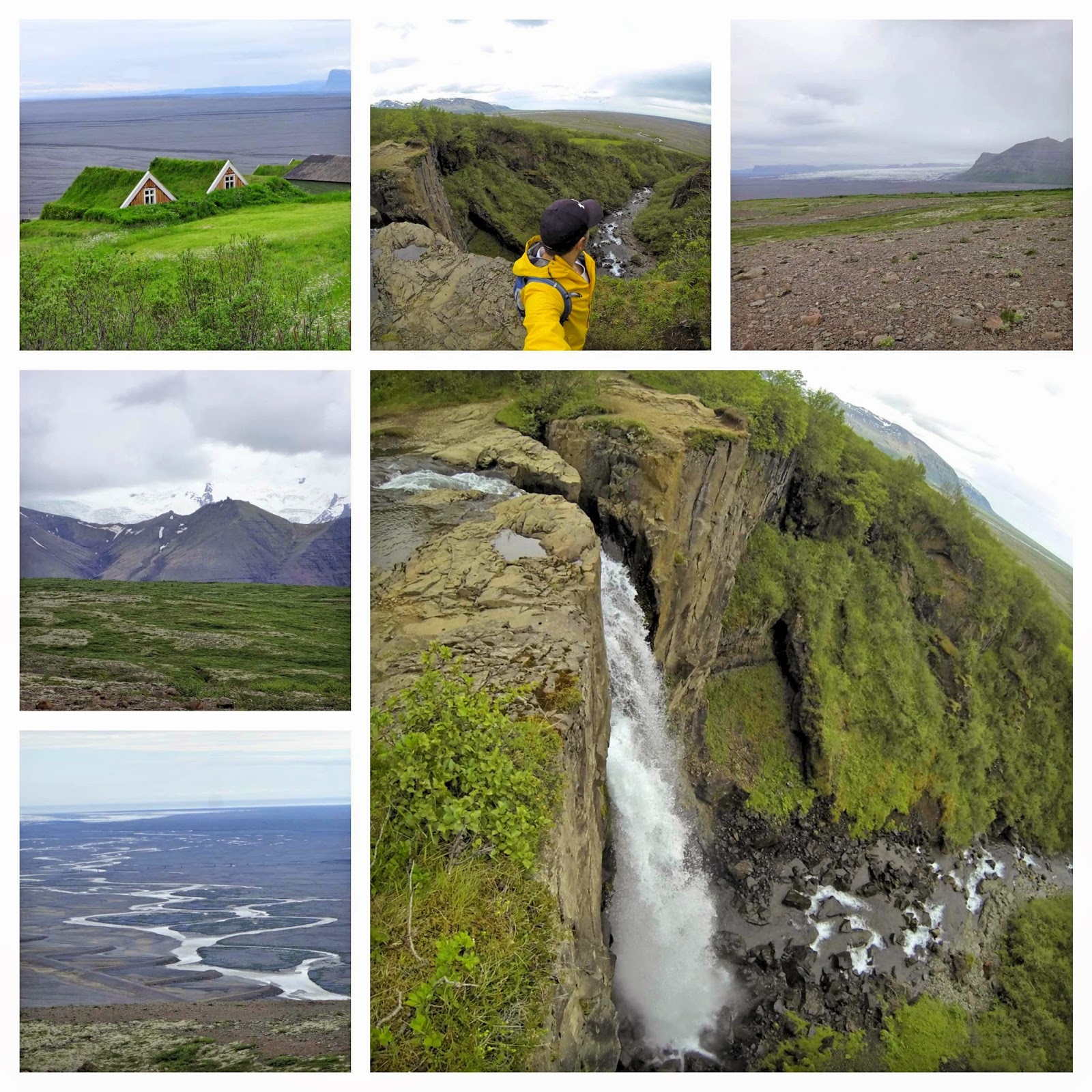 I didn't find the hiking to be too difficult, and I spent more time in this park than I had initially planed. Specially since I decide to walk towards the base of the glacier. I probably spent over 3 hours in this park, and worth it.

Back to the road I went, extra careful with my speed and hoping to remember to exit in Kirkjubæjarklaustur, because that waterfall was vibrant. Unfortunately it didn’t go as planned and I missed the exit.  There were other attractions that I could had stopped along the way, but I was tired and just wanted to return to Vík, I had a picture date with the city.

When I finally made it to Vík, guess what?  Yes, it was raining and foggy, once again I wouldn’t have the opportunity to get the pictures I wanted.  I went for a walk in the famous black sandy beach, and even with the rain that place is magical, the colours the ocean, the freaking birds.  To end my visit to the town I went back to the same restaurant from the night before, near the supermarket, and had an amazing fish, recommendation from a fellow traveller I was meeting everywhere I went. 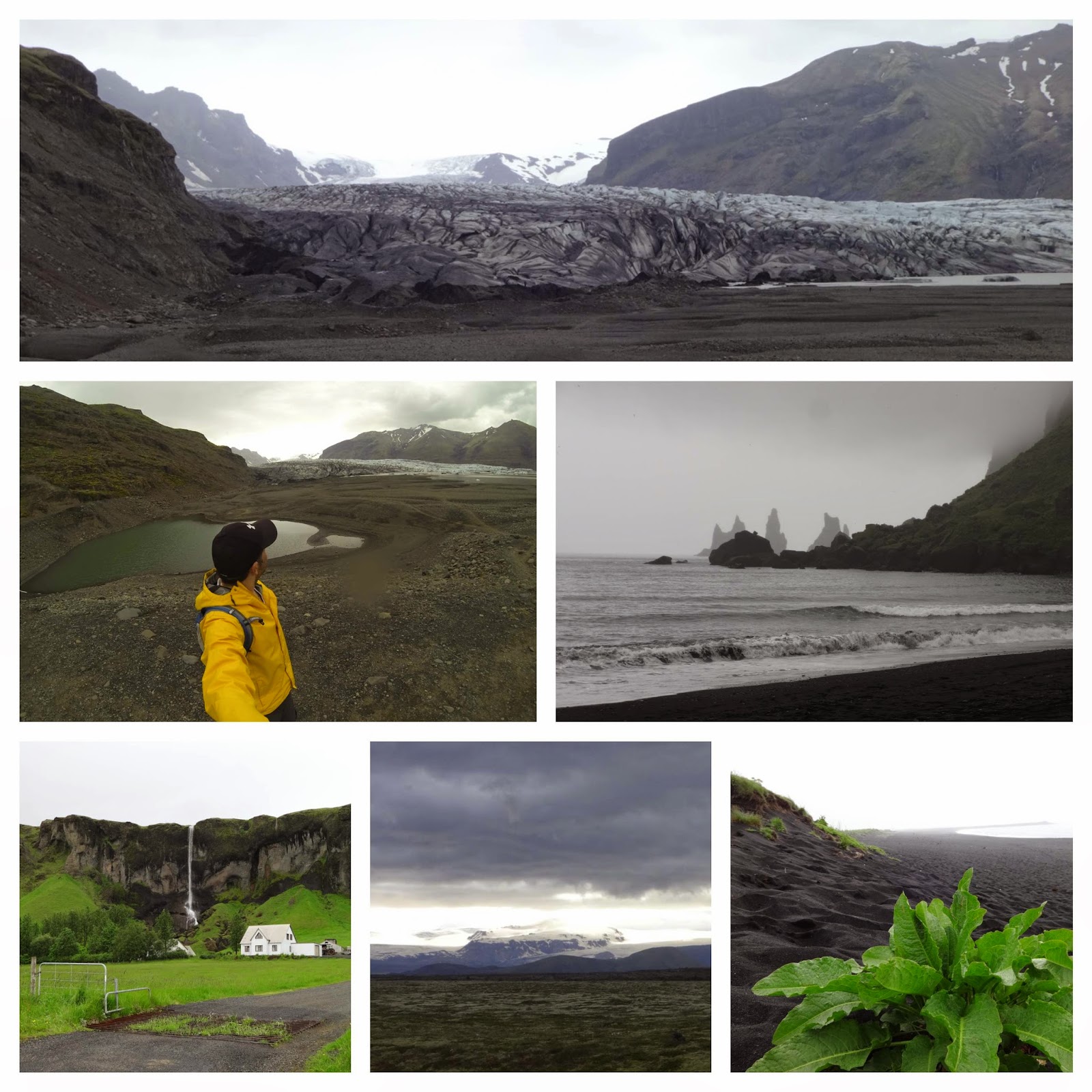 I thought about trying to hike to the C-47 Dakota airplane shell located not far away from the guesthouse I was staying.  The wreckage has been there since 1973 when it crash landed on Sólheimasandur’s black sandy beach - everyone survived.  I know is just a plane, but I thought it could be an amazing phone opportunity, specially since had stopped raining. I also thought about returning to Vík because of the nicer weather but instead decided to visit my bed for a good night of rest.