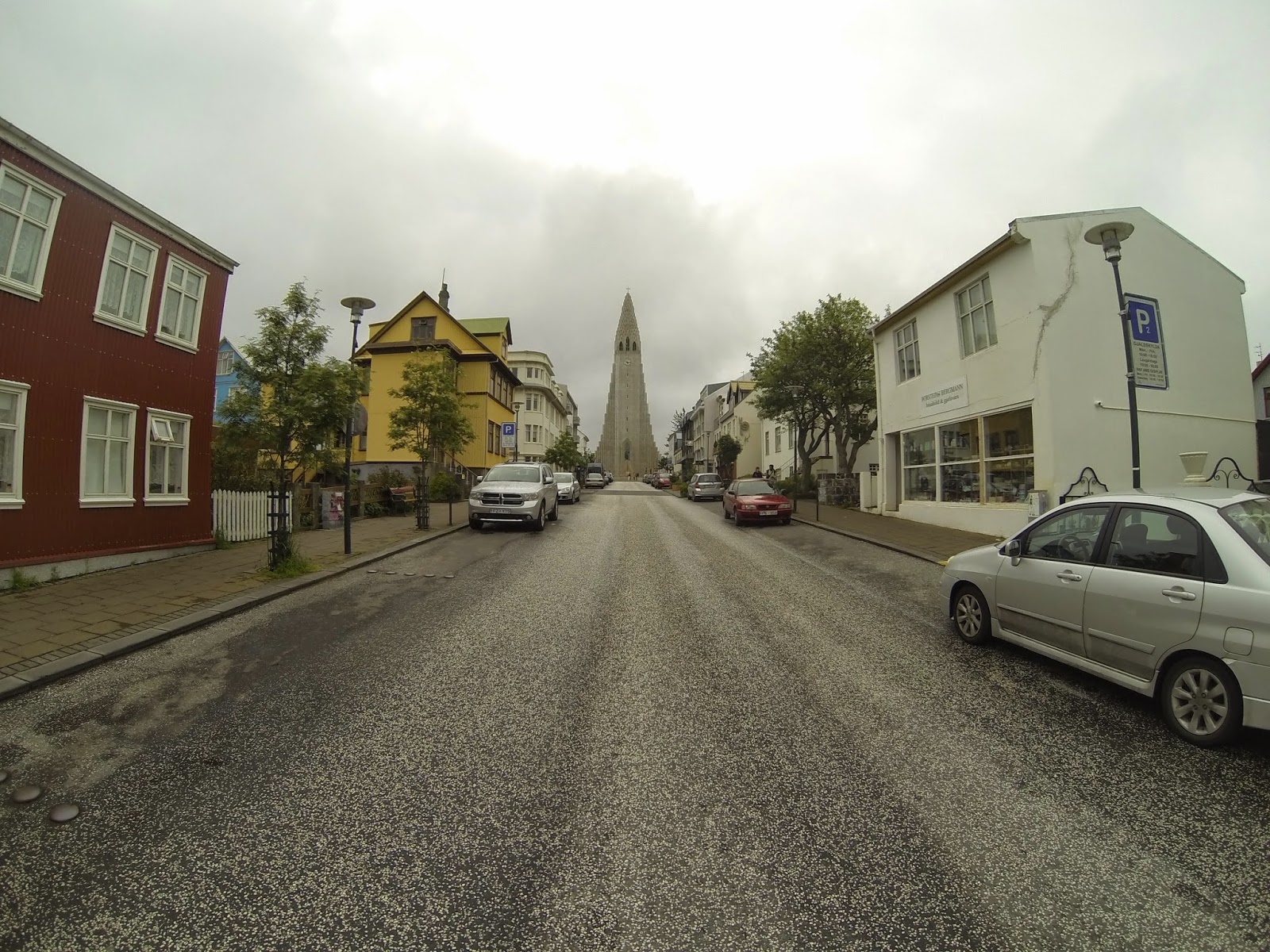 Saturday morning and I only had to return my rental car until 5pm, so instead of hanging out in the capital I decided to visit the Reykjanes peninsula just South West of Reykjavik. 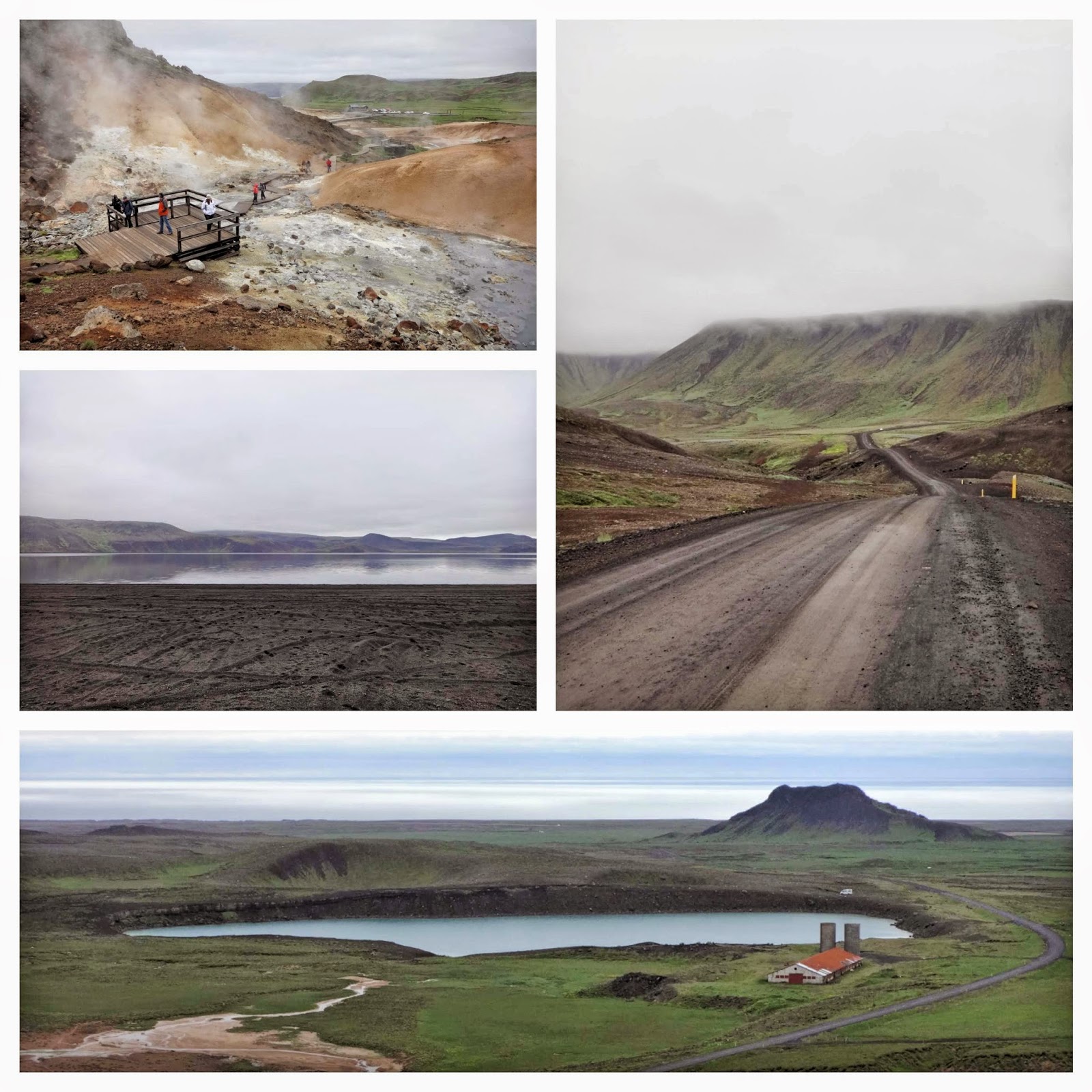 Simple drive along routes 41, 42, 427 and 425, and although it is worth exploring if you have time, I did not find it as impressive as everything else I saw in the last couple of days.

Fun drive thru route 42, where again you will find some great mountains with those yellow, brown and green colours I'm so used in seeing now.  Right in the middle of the peninsula you will come across the Kleifarvatn lake, the largest in the region and since the earthquake of 2000 it has lost 20% of its size.  Very dark water and please make sure not to go crazy trying to drive your small rental into no no areas, you might get stuck. 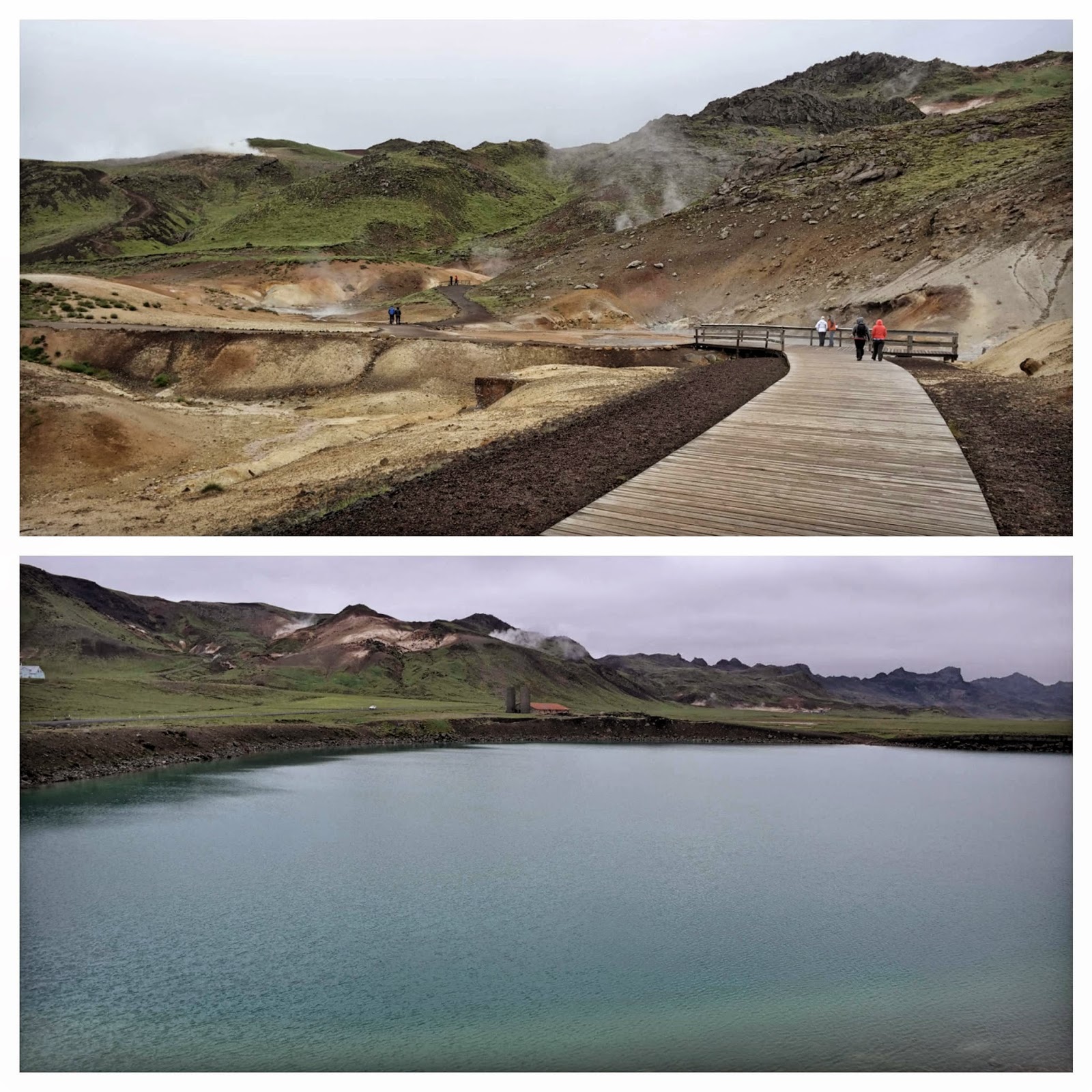 No longer after the lake you will find the Seltun geothermal area with its powerful sulphur smell and colours.  Small area but worth to stop and see it because probably you don’t have anything similar back home.

Then you will notice as soon as the cars leave this area they stop by another lake not far away, this is the Grænavatn lake with its turquoise waters, which I’m sure would look super cool if it was sunny.

At the end of route 42 you will find the Krysuvikurkirja church - why do they use so many consonants? - My map was telling me it had burned down in 2010 so I decided just keep going on route 427 towards Grindavik and then finally to Reykjanesta cape, this is the furthest you will go in this peninsula, and the lighthouse will meet your expectations, so will the cliffs full of assassin birds. 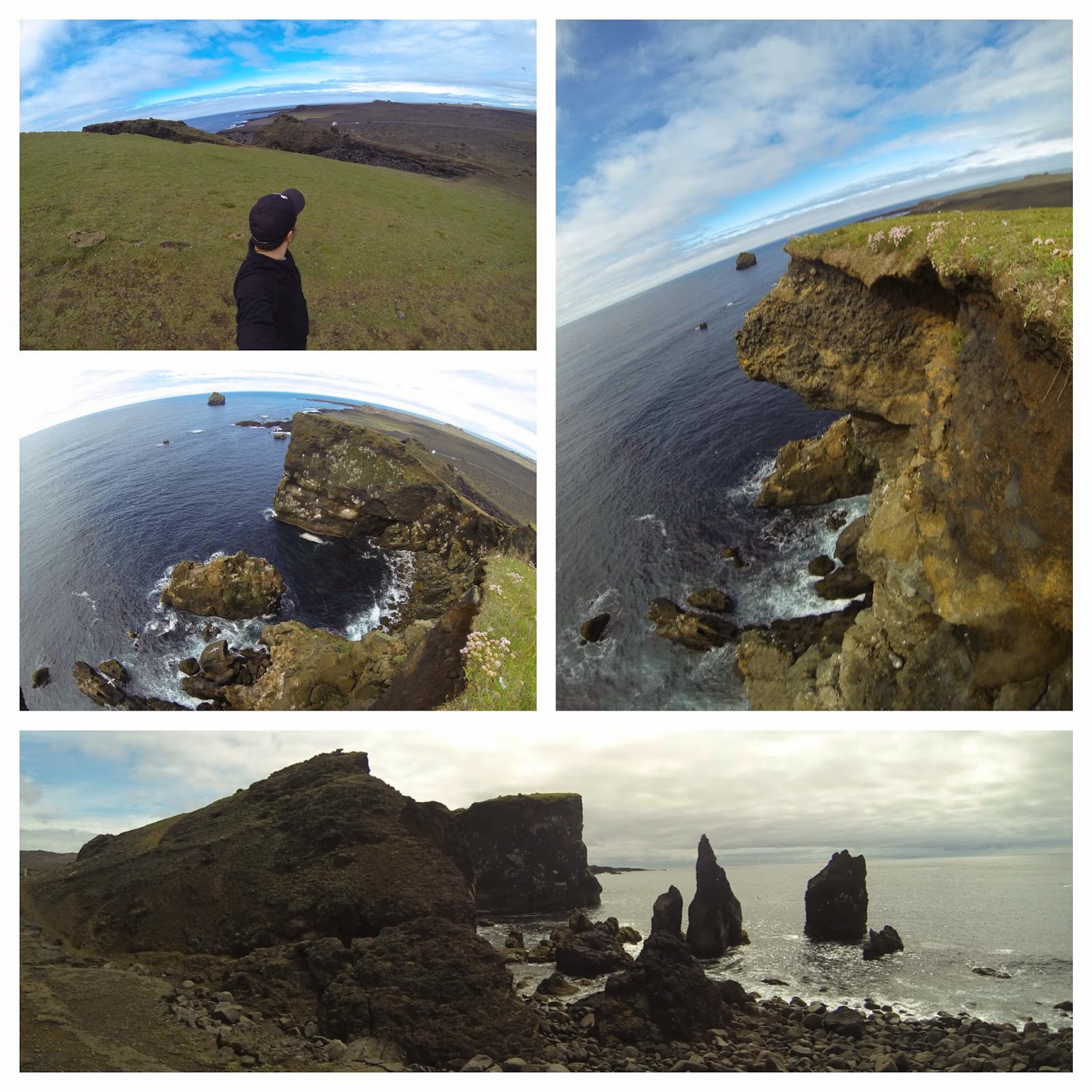 There is a major power plant in the area, you will see columns of smoke coming out them.  Driving to this point was kind of confusing in the sense for a while I thought I was driving to the wrong place, but pretty much it would be hard to get lost because there are not that many roads but the ones you see in the map.  I thought about taking route 45 to see the other tip of the peninsula but I was running out of time to return my rental so I decided to drive back to the capital.

My next adventure was exactly the return of my rental, this is when I would have to explain to Hertz about my little incident with their car.  Pretty much it was very straight forward, I explained what happened, they told me the CDW did not cover the damages, which I already knew, and they charged my AMEX for the value of the bumper replacement (around CDN 1500.00).  Then the cutie that had helped me when I picked up the car drove me back to my guesthouse.  This is very important guys, before leaving to Iceland I called my credit card company and told them I was not allowed to decline the CDW from the rental company, and in order for the AMEX coverage to kick in I must decline any type of insurance.  Due the fact this was not possible AMEX told me to make sure to write on the rental contract I was not allowed to decline the insurance and in case something happened AMEX would take care of everything. Love this credit card because they even covered the ash, gravel and alien abduction.  When I returned to Montreal I filed my claim and within a week I received a cheque for the same value Hertz Iceland had charged for the bumper replacement in their Yaris.

I still had 3 days left in town and I wanted to finish in style, so I upgrade to the Hotel Leifur Eiriksson located right next to the cathedral.  Listen, it was only 3 blocks away from my previous guesthouse, room size was probably the same, more expensive but I was happy with it.

According to everyone I talked to night life in Reykjavik happens on Friday and Saturday night.  Friday I was too tired to go out, but today I was ready to find out what happens in the city where the sun almost never goes down in the Summer, and remember, this would be one of the longest days of the year.

First because the World Cup was still on and I still haven’t seen Brazil play at all, I hit one of the pubs in town where I joined lots of other soccer fans to watch the games.  I met a lot of people this way, and all the pubs had giant screens, happy hours, anyway sometimes it was hard to find a seat to have a drink and watch the game, but you always found a way.

Later on I ended up at the Club Kiki (on Laugavegur 22), called the queerest corner in town.  The club is actually located on the 2nd and 3rd floor, the last been more like a mini lounge area. Initially I wasn't sure about the music, kind of lounge vibe, people seating all over the place and windows covered by very thick curtains. Remember, this is Summer and literally it never gets really dark, thus the curtains. Met several people at this place, a mix of foreigners and locals, and the sad disco ball in front of the minuscule deejay booth progressively became happier as time and music keep moving.  Talk about a warm up set not only by the deejay but also buy the location.

By the time the music was at full swing, the dance floor was packed with people dancing and the chairs/tables had pretty much disappeared. No regrets in going out, Icelanders are party crazy people and I ended up in another party with some locals and Brits. What a great welcome to the Summer 2014. 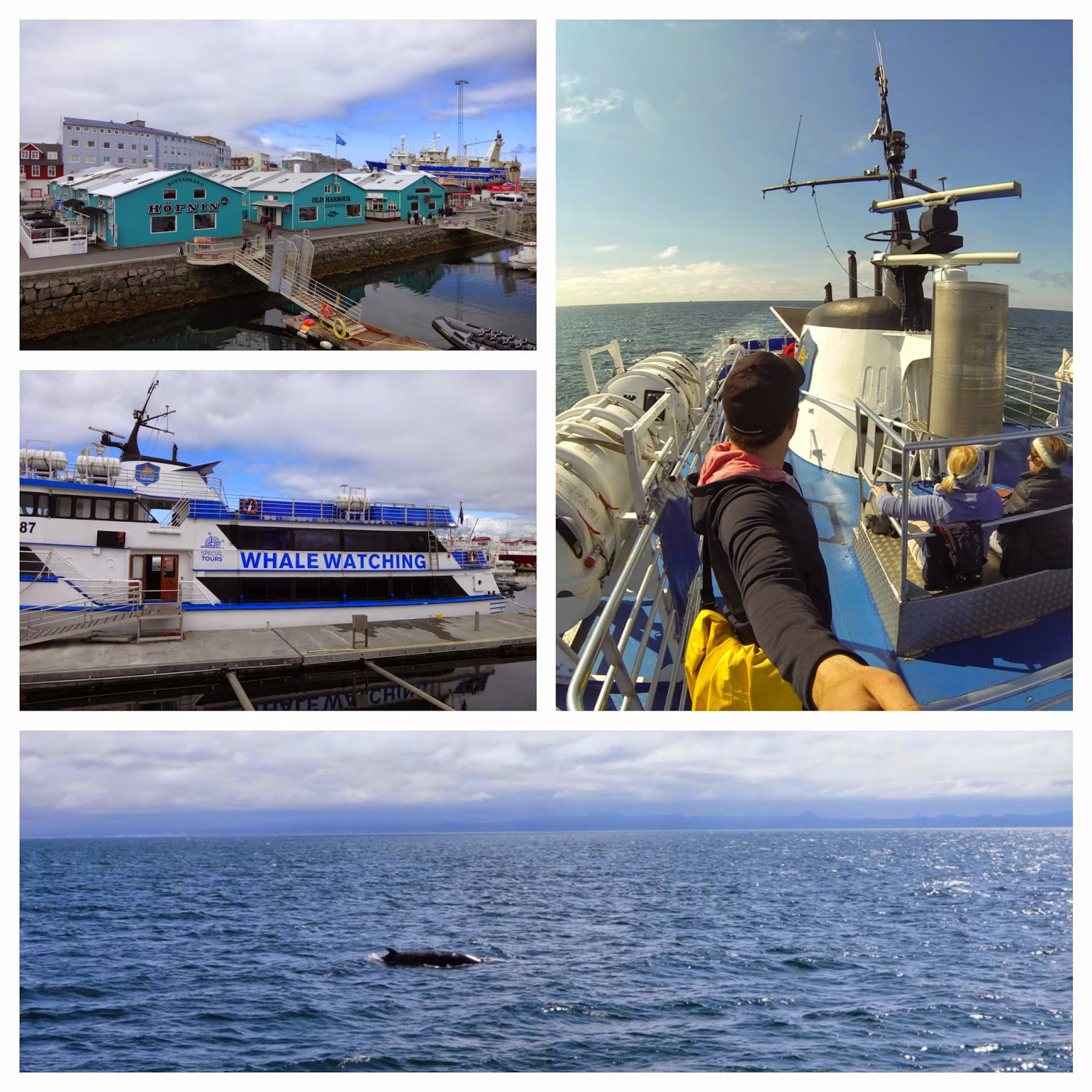 Pretty much my life was to explore everything about the city, I walked a lot, visited some museums, watched more World Cup games in different pubs, and I also did a 3 hours long whale watching tour.  Iceland Tours had included an open voucher with “Life of Whales”.

Definitely recommend the whale watching tour, if the weather allow of course.  We had the funniest viking guide tour, and yes we got to see several whales, not the big blue whale but whales nevertheless.

Ate good, expensive and cheap food, it depends on what you feel like having at the moment.  Walked in different areas of the city, including the water front where the Höfði house is located, this is where in 1986 the Reykjavik meeting occurred between Ronald Reagan and Mikhail Gorbachev, the beginning of the end.

There are many parks, hidden gardens, expensive shopping - actually whom am I kidding, everything is expensive in this country, but worth it.  Historic sites, landmarks, harbor, statues, mini lakes.  Do not forget to climb to the top of the cathedral, and have a bite to eat from the food vendor on the park Leifur Eiriksson, try the fish and chips, visit the Perlan and there are many other things to do. 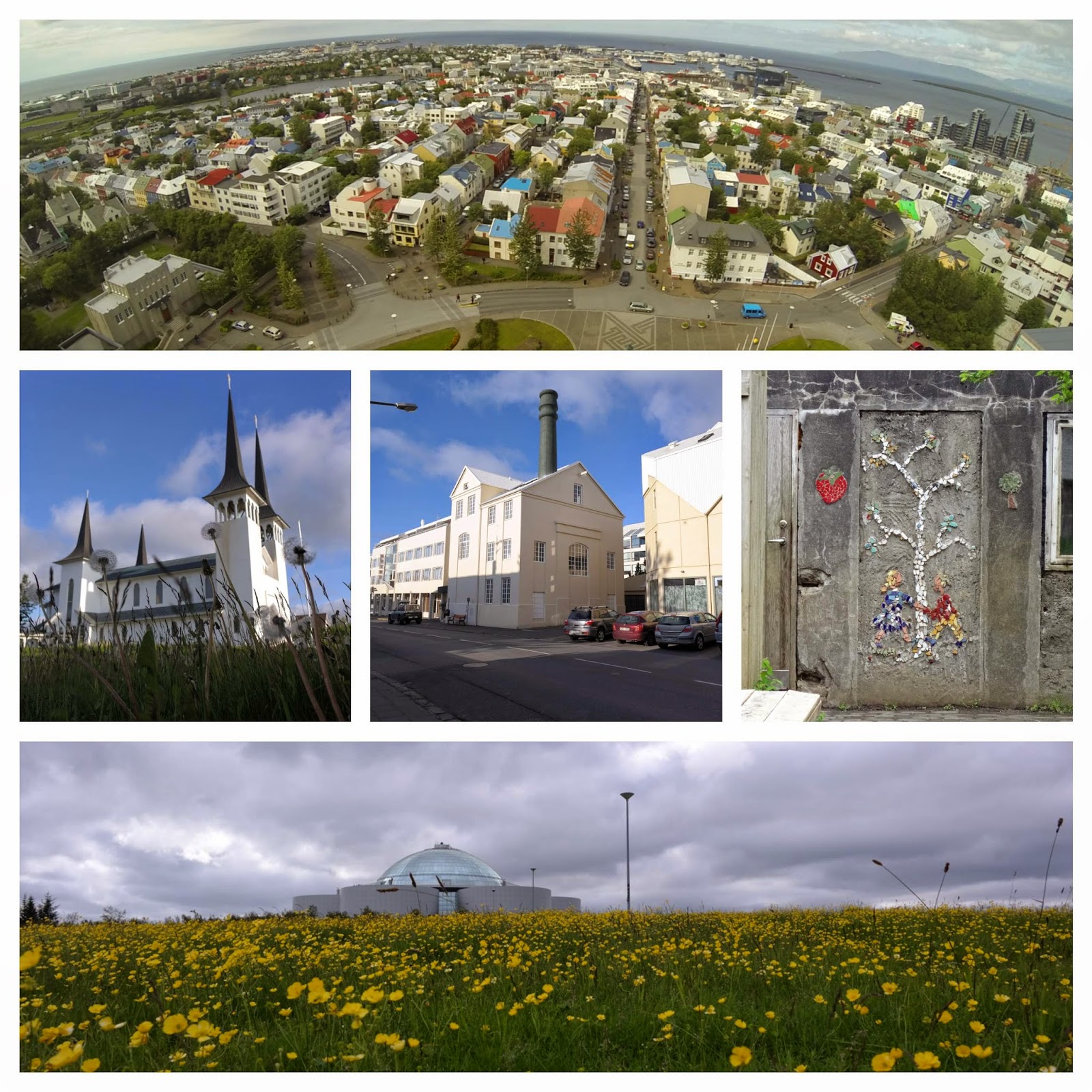 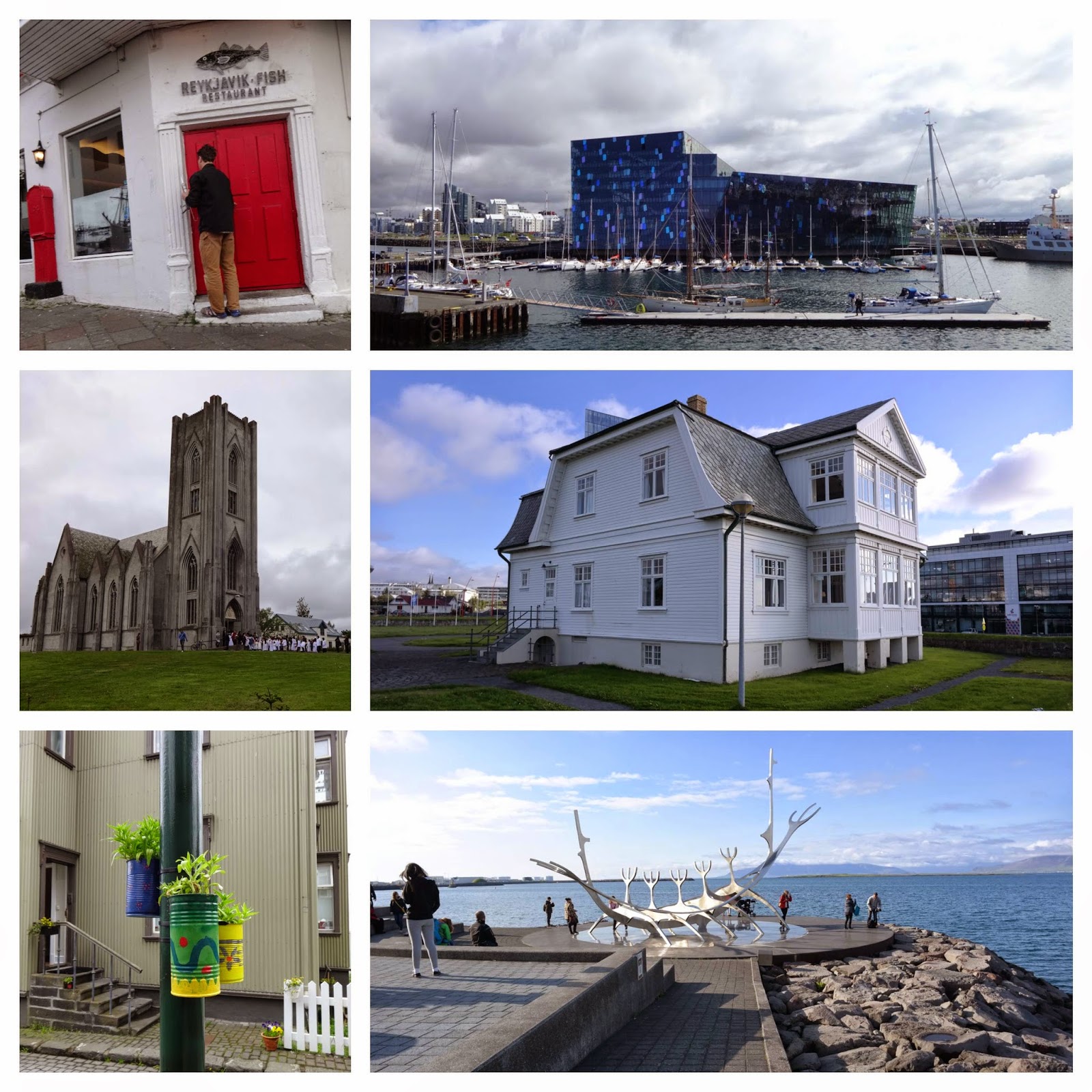 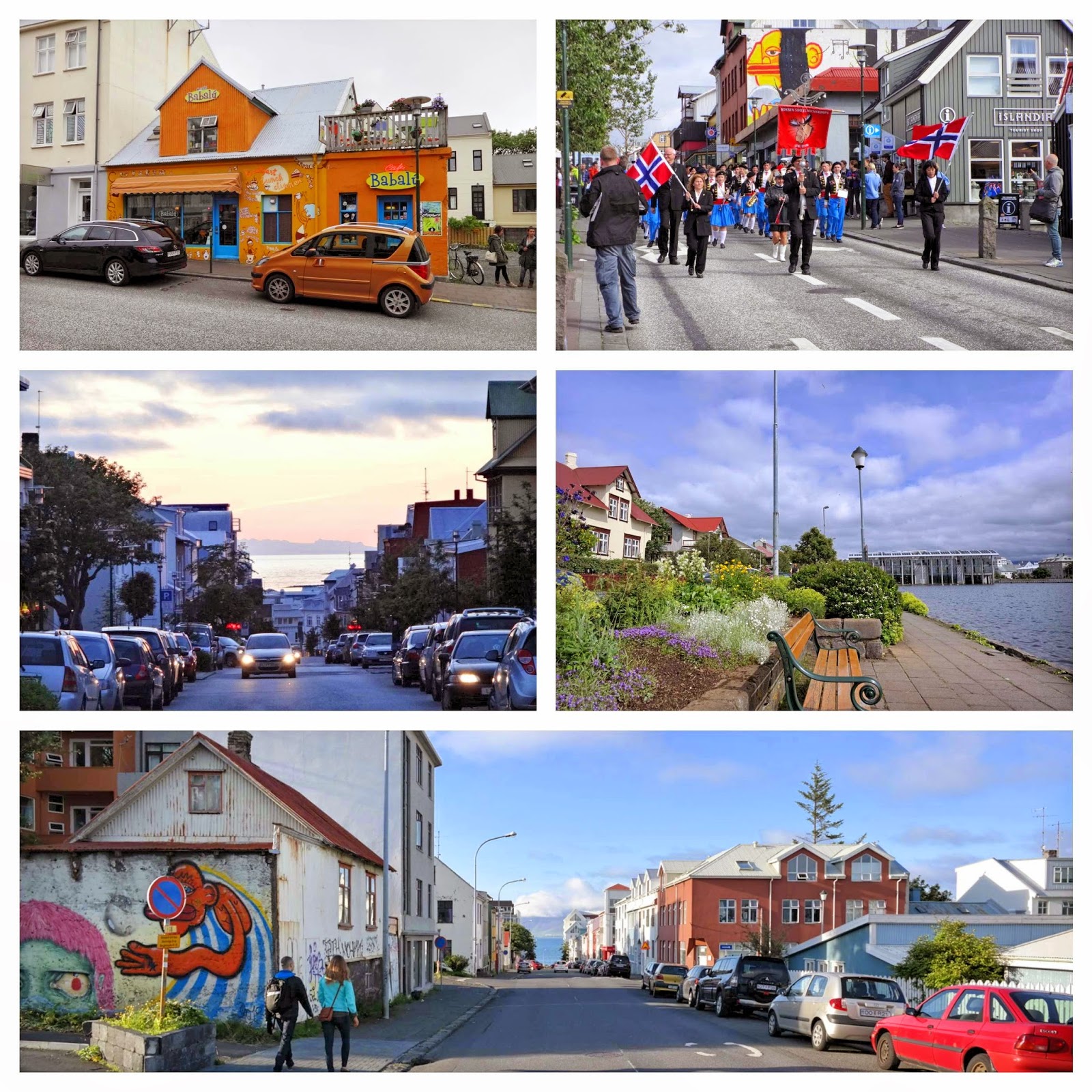 My last day in Iceland and it was raining cats and dogs.  The plan was to spend some time at the Blue Lagoon, before leaving to the airport to catch my 6:40pm Icelandair flight to Halifax, then catch my flight to Montreal. 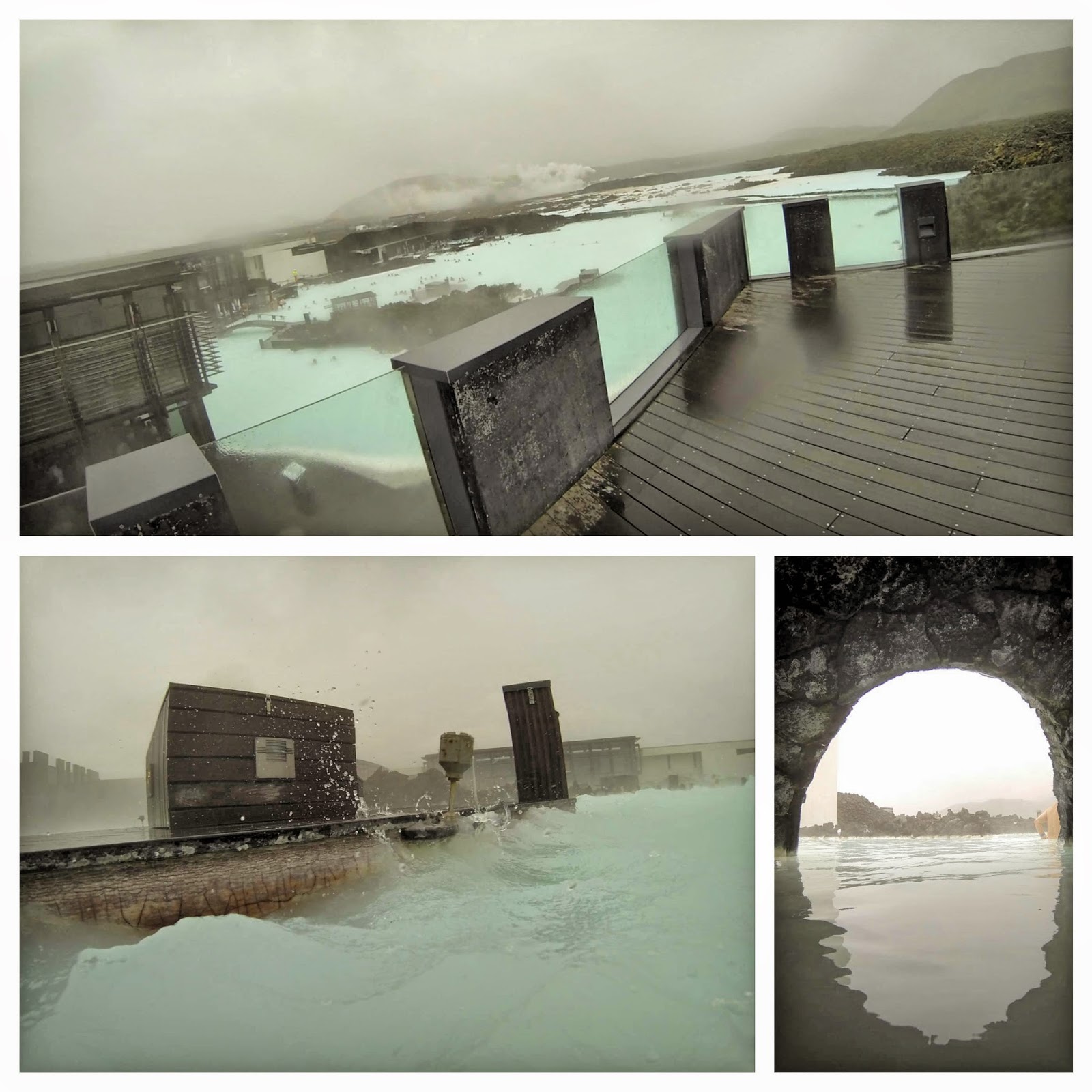 The hotel arranged my pick up with the bus company and they almost forgot about me.  Fortunately there are always little buses picking up tourists in all the hotels and to the terminal I went. I arrived just on time to buy my bus ticket, the Blue Lagoon entrance and take off again.  Just buy the ticket beforehand otherwise you will have to line up to get it.

The Blue Lagoon is located 40 minutes drive from the capital and 20 minutes from the airport. The closer you get to the place the more it feels as if you were arriving to the moon.  Then you start noticing the blue water, the colour due to the  silicate minerals. 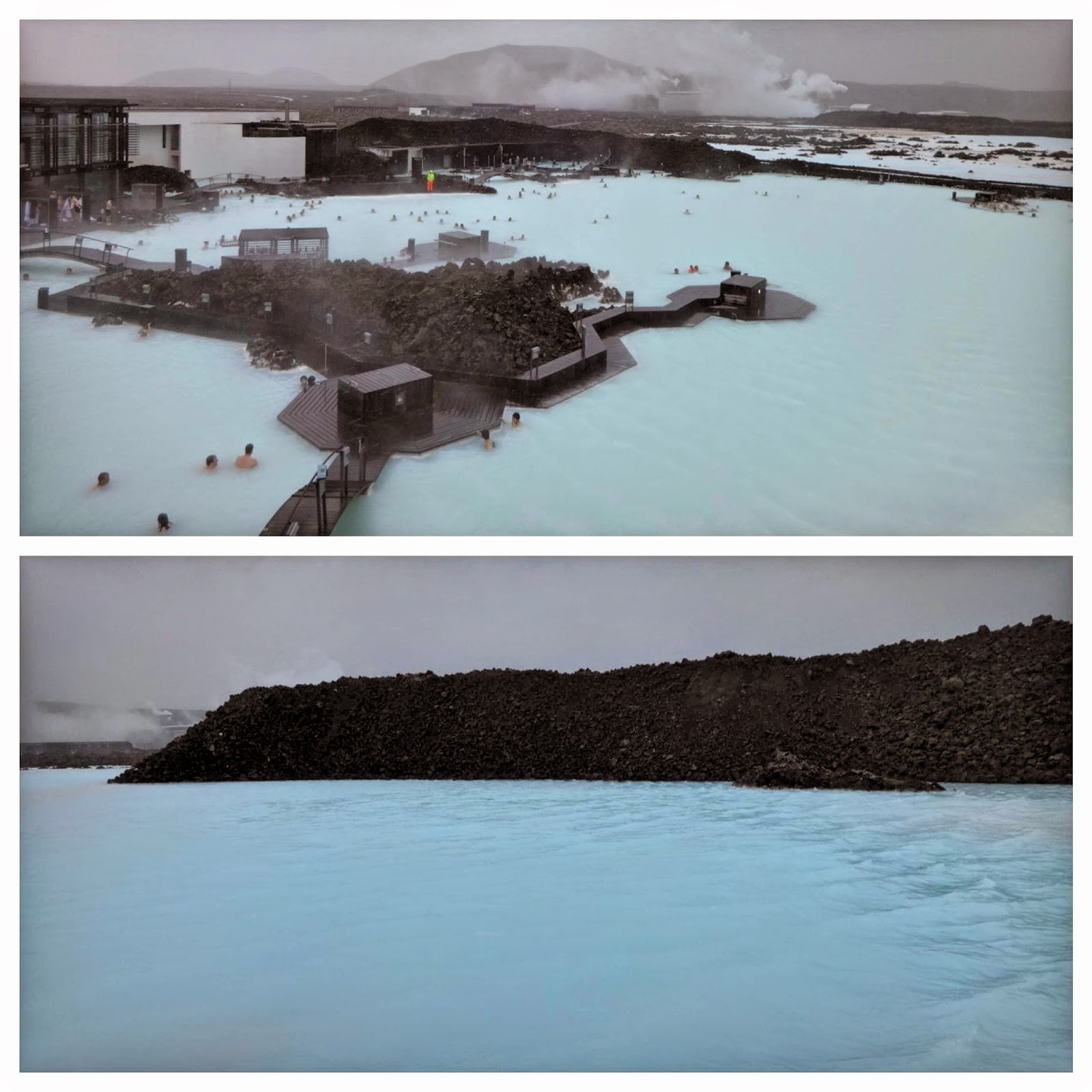 Listen, yes it is a tourist trap, and there are many other geothermal spas in the country, and yes it is expensive to get in.  Nevertheless it is something you have to see, specially if you have time before your flight back home.  I guess my suggestion is depending what time your flight out is you should leave this visit to the end of your trip.  The spa is well taken care, with several showers, lockers, main restaurant, and lots of people.  It was raining, windy and cold when I was there but it doesn't matter because the water temperature is between 37 and 39 °C.  Met different travelers while on the pool, some had just arrived to the country and other were leaving that day like myself.

One thing I forgot to do was to pay attention on the bus schedule, and I had to wait a big too long for the bus to pick me up to the airport.  I almost called a taxi but at the end everything worked out and I made it to airport with plenty of time. 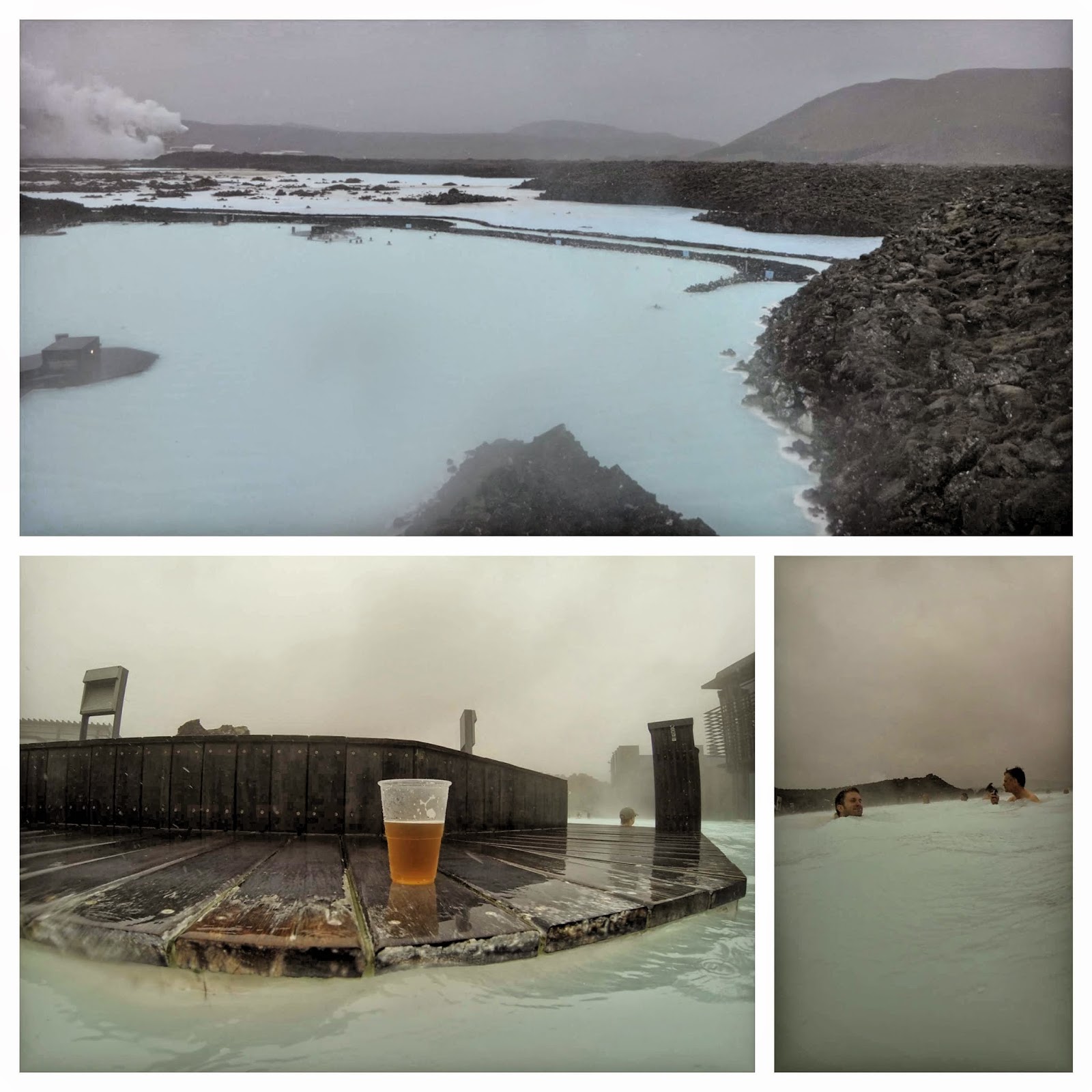 Guys, this was an unforgettable trip and I cannot believe I didn't think in visiting this place many moons ago. Although the place is expensive (Canadian standards) I encourage you to go and spend at least 10 days traveling around.  The majority of Icelanders speak English, just make sure to learn a couple of words here and there.  Make sure to respect the environment, don’t drive or walk where you are not allowed, don’t get a speeding ticket like myself, they are not cheap either.   Be prepared for the weather and enjoy what this beautiful island has to offer. The vikings conquered forcefully different lands, but now they are easily conquering our hearts with their beautiful land and people hospitality.


The end, or until I sell one of my kidneys so I can visit the rest of the country. 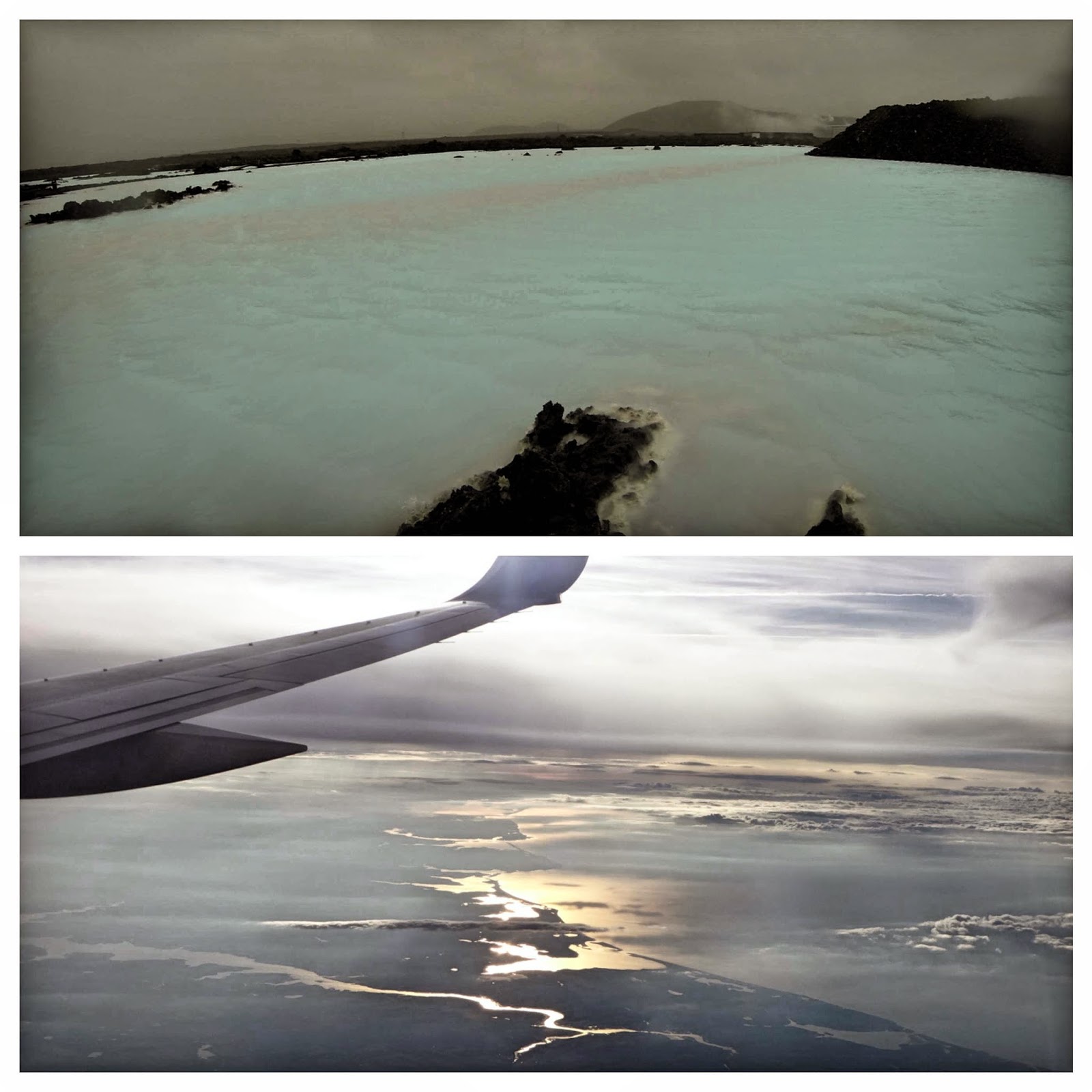 Thank you for sharing your adventures in Iceland! What a journey it must have been, captured in those gorgeous and awe-inspiring photos! Now, I can't wait for my trip to Iceland this summer and your useful tips in this blog shall follow me there. Huge thanks and have a great life travelling!

Hello Anonymous, I'm glad you enjoyed my adventures, and I hope you have lots of fun in Iceland, such a beautiful country.